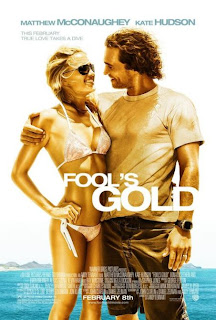 When you think of gold, you think of Oscar gold, but Fool's Gold features Kate Hudson and Matthew McConaughey's golden tans and that's about it.

Fed-up Tess (Hudson) divorces shaggy, slaphappy beach bum Finn (McConaughey), who uncovers a piece of a plate in the Caribbean waters that's part of a long-hunted 1700s Spanish treasure called the Queen's Dowry. By stupid contrivances, the ex-couple both find themselves aboard a yacht owned by a billionaire (Donald Sutherland, what is he doing here?) and his dippy heiress daughter (a sprightly Alexis Dziena, who looks in need of a cheeseburger) and team up to find the rest of the legendary loot. Unfortunately, a rapper-gangster and his dimwitted henchman are in hot pursuit for them and the Dowry.

Oh, and do you think the bickering Tess and Finn will fall passionately in love again?

Everyone is a blundering fool in Andy Tennant's mindlessly entertaining but discouragingly flat romantic comedy-adventure, which tries coasting on the compatibility between the two extremely attractive stars from their last star vehicle, 2003's How to Lose a Guy in 10 Days. McConaughey flexes some charisma in another beefcake/beach-bum role and Hudson is her likable, photogenic self, and boy, do their bodies ever shimmer, but hoped-for sparks never materialize.

Back to movie, the historical treasure exposition is needlessly overwritten and long-winded when Matty and Katie prattle on and on, and the tone jumps, yes, overboard from lighthearted romantic-comedy to dumb, sometimes too-violent undersea-treasure adventure.

The Australian scenery makes for a beautiful vacation and the action gets lively, but the closest we get to romance is when the camera makes love to the Texan male star's tan-bronze, chiseled physique and the blonde cutie getting weak at the thought of his prowess in the sack.

A light trifle that's easy on the eyes, but as far as recent attempts at romantic-comedy go, Fool's Gold is another genre fool.