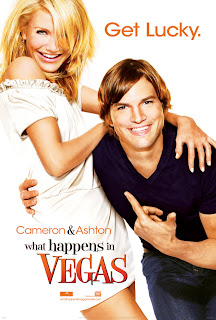 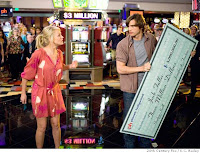 You already know "What Happens in Vegas" by the promo and pretty much get what you'd expect: a mildly entertaining if wildly uneven romp. This is Hollywood's idea of a mainstream battle-of-the-sexes comedy; imagine had Kathleen Turner and Michael Douglas reconciled their differences with hugs and kisses at the end of "The War of the Roses" rather than hanging onto that loose chandelier and crashing to their death. Strait-laced, just-dumped Manhattan stockbroker Joy (Cameron Diaz, we kid you not!) and carefree, just-fired woodworker Jack (Ashton Kutcher) wind up in Sin City the same weekend, get rip-roaringly smashed, and wake up married. They also get lucky on a slot machine, winning $3 million; the judge (Dennis Miller) and plot contrivance force these squabbling newlyweds to wait in annulling their marriage by staying together for a six-month trial period of "hard marriage" and counseling (with Queen Latifah) before they can collect their winnings. Dirty tricks and shenanigans of sabotage ensue!

But the well-matched, lightly appealing stars are never afraid to look goofy or act childish on screen, and are well backed by second bananas Lake Bell and Rob Corddry, as their caustic, smartassy pals, who steal most of the laughs. As the saying goes, what happens in Vegas, stays in Vegas; the movie has that same drunkenly forgetful appeal.