Lots of laughs make up for "Death's" familiarity 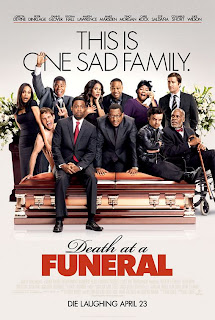 That was then, with more subtlety, and this is now, a lot bigger, louder, and more effortful. Brits would say “Quite,” and the African Americans would say “Fo sho” that this Death at a Funeral is almost too faithful.

Working from Dean Craig's mostly-the-same script, a few name-dropping jokes are added to the dialogue and some recreated scenes are overwritten. But what worked then, works again on its own, thanks to the capable American cast rejuvenating familiar, too-soon material.

Before, it was in England following a stiff-upper-lipped family, and now it's set in Los Angeles with a just-as-nutty black family. The title funeral in honor of a patriarch is being hosted by Aaron (Chris Rock), the responsible son struggling to come up with his father's eulogy. Everyone else thinks Ryan (Martin Lawrence), the skirt-chasing author brother, should write it instead.

James Marsden steals the show as the high-as-a-kite Oscar, Aaron's cousin's fiancée; Alan Tudyk's chemically induced folly was hilarious, but Marsden uses some comic invention of his own. Rock brings an incredulous calm in the straight-man role, while Lawrence is irritating and phones it in, and Tracey Morgan is a riot, killing a hilarious “Louis Armstrong” line with a grin. Luke Wilson seems a little out of place as Zoe Saldana's weasely ex-lover. Only Peter Dinklage returns to his role as the former gay lover of the deceased.

By contrast with Frank Oz's droller handling of the material, director LaBute goes for more skittish visual emphasis in hopes that it will punch up the comedy. Most of the raucous laughs still register, same going for the scatological toilet joke involving a crotchety old uncle (Danny Glover), and there is some new outrageousness.

A whiff of “this is the same movie” lingers and every joke feels telegraphed, but at least this Funeral is more consistent than a Tyler Perry movie.