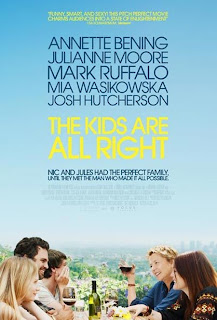 More wonderful than just “all right,” "The Kids Are All Right" is a small film in scope but feels big in achievement and reward. A very adult and joyfully satisfying slice of life, it's not about lesbian marriage but the dynamics of a modern family with parents who just so happen to be the same sex. After all, this is America, the freest country! It's also about parenting, sperm-donor dads, teen angst, sex, red wine, and college move-in day, which are all welcome in a creativity-dry movie summer.

Annette Bening and Julianne Moore play Nic and Jules, a married couple of life partners—a tightly wound, micromanaging doctor and an aimless stay-at-home mom trying to start up a landscaping business—living in the So Cal suburbs. Their teenage kids, college-bound Joni (Mia Wasikowska) and rough-housing Laser (Josh Hutcherson), are curious on the origin of the father (a sperm donor), so Joni requests a meeting with Paul (Mark Ruffalo), a groovy, laid-back restaurateur. The kids hit it off with Paul, who starts bonding with them, but 'Moms' are less than thrilled when they find out.

It sounds like a sitcom premise, but writer-director Lisa Cholodenko (2002's "Laurel Canyon") and co-writer Stuart Blumberg's terrific script is more than that. It's conversational without being stagey, humanly touching without pushy sentiment, and intelligently wise and calmly funny. The laughs are never forced with comic exaggeration but spring organically from the characters and situations, even in a bedroom scene where the moms' gay male porn watching accidentally stirs up a racket. There's no better substitute for experience, as Cholodenko conceived a child with her partner from a donor and Blumberg donated sperm in college. And Cholodenko's simple, gentle direction punctuates hazy, sunny Southern California in this all-around naturalistic piece of filmmaking.

Bening, Moore, and Ruffalo are at their convincing, witty, sexy best as they nail every nuance and character flaw of their lived-in, well-formed characters. And Wasikowska and Hutcherson, as the kids, keep getting better and better as the mature young actors they are. Bening, especially, has the tricky task of making Nic the disciplinarian without being bitchy or unlikable; she really shines in a nice moment where she sings Joni Mitchell over dinner at Paul's. And Jules, though a little flighty, is never played dumb by Moore. Refreshingly leaving politics out of it, "The Kids Are All Right" remains an honestly warm and funny indie gem for mainstream audiences of any sexual orientation.