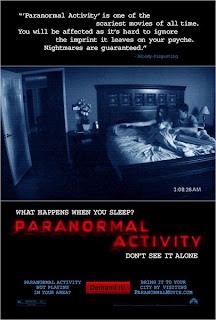 When that groundbreaking little found-footage mockumentary called "The Blair Witch Project" brought in much hype exactly one decade ago, it was from viewers initially unable to separate fiction from truth. In the same do-it-yourself, cinéma vérité spirit as that kids-lost-in-the-woods indie, director Oren Peli has created a genuinely chilling, play-on-your-own-fears freakout out of "Paranormal Activity." This heebies-jeebies item made for a teeny $15,000 shoestring might look like a Blair Witchingly familiar YouTube video, but you'll have to sleep with the lights on after this one. Who knew being trapped in one's own home could be so ripe for scares as it is getting lost in the woods?

In 2006, twentysomething San Diego couple Katie and Micah (portrayed by Katie Featherston and Micah Sloat), an English student and a day trader, have moved into a beautiful new home. Ever since she was eight years old, Katie has been haunted in her sleep, so Micah decides to shoot surveillance on a fixed camera position in their bedroom overnight in hopes of it picking something up. Sensing a supernatural presence in their home, Katie calls a psychic (Michael Bayouth) to bring a little resolution to their paranormal problem. He claims it to be a demon rather than the spirit of a human being. Problem is, the energy in the house is so negative that he can't do much and no matter where they go, the entity will haunt Katie. Early on, the bedroom door moves and noises sound from doorstairs, but by Day 15 footage, Katie is waking up and standing in a catatonic state for hours. Micah begins antagonizing the demon while Katie is a true believer. Suffice it to say, they should've called the demonologist on Day 1.

As unknown actors and with their real names intact, Featherston and Sloat are believable and relatable as this alternately spiky, bickering, loving couple. In order for the film to work, one must suspend major disbelief that Micah would keep rolling the camera, but for the most part, his determination to find whatever's haunting he and his girlfriend makes sense. With a minimalist style consisting of mostly static bedroom shots and the rest being handheld, Peli's simple, bare-bones staging is preferable to visual flash and thus more frightening. Hour by hour, the camera footage surveys the couple asleep in bed and sometimes the time-code will skip ahead hours later until things clearly but subtly move at their own volition.

"Paranormal Activity" has a very stop-and-start rhythm, but the sights and sounds punctuate the footage and elicit goosebumps and jolts. Never have creaky noises, loud footsteps, shadows, and doors slamming been so effectively scary to suggest poltergeists, but darkness, silence, and waiting will evoke more chills than any special effect or blood splatter. Besides creating a package of intense, scary humdingers that'll make you go eeek!, "Paranormal Activity" will bring in bucks for the Ouija board trade. Good luck having a pleasant night's sleep.