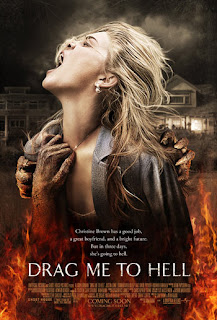 
Deliciously scary, furiously paced, and a lot of gross fun, "Drag Me to Hell" marks Sam Raimi's return to his signature ghouls-and-giggles bag of tricks. Check out that nostalgically vintage Universal Studios logo opener to get you in the mood, too. It'll be the most damn fun you'll ever have going to hell!

Alison Lohman plays Christine Brown, a timid loan officer for a California bank who hopes to curry favor to her boss (David Paymer) and receive the assistant manager promotion by being more aggressive and “making the tough decisions.” And here comes her chance, as a 200-something Slavic gypsy crone, Mrs. Ganush (Lorna Raver, wonderfully grotesque and memorably chilling), about to lose her house, asks for a third extension on her mortgage. Christine, of course, declines even after the old hag gets on her knees to beg. Security! “You shame me,” Mrs. Ganush tells Christine, and with that she places a curse of the half-goat/half-beast Lamia, and after three days of being haunted, the selfish Christine will be drug to hell. Dun-dun-dun!

Low on subtlety but full of outrageously over-the-top gross-out gags—involving phlegm, projective vomit of maggots, and embalming fluid—"Drag Me to Hell" is done with startling, hilariously vile glee that you can just picture Raimi giggling like a school girl behind the camera. His enthusiasm is infectious. The real crowd-pleaser early on is an excellently directed and wild, enjoyably staged brawl between Christine and Mrs. Ganush in a parking garage late at night that, seamlessly blending suspense and macabre humor, involves slimy dentures and office supplies like a stapler and ruler. There's even cleverly icky use of Ganush's scarf, finger nails, and glass eye (sound effects included!), as well as a supersized nose bleed and pesky flies buzzing in and out of facial orifices. And not even a cute pet kitten is safe in this one. None of this is supposed to be taken too seriously, of course.

Raimi pays homage to his own "Evil Dead" movies (an eyeball-in-the-mouth gag and see if you recognize that yellow 1973 Oldsmobile) like a kooky, crazy-as-hell, deliriously schlocky symphony. Never detracting from its fiendish atmosphere and sinister omens, the film even throws in a bit of Looney Tunes lunacy for good measure. A climactic séance gone wrong with a possessed talking goat also calls back Raimi's "Evil Dead II: Dead by Dawn." With a moral lesson to never mess with old gypsy grannies, a tongue-in-cheek, playfully morbid sense of humor about itself, and a campy, cult-following title to match, there's much to savor here in this hoot of a horror-comedy.

Although Ellen Page was scheduled to be cast as Christine, the sweet-faced Lohman has the perfect measure of cute sunniness and feistiness, and she throws herself into the role. She earns our empathy as Christine, a formerly pudgy farm girl that's eager to please and forced to make all the "tough decisions" in order to earn her promotion. Plus, never has a scream queen gotten so slimed, hit with something, or gotten so much goo in her mouth since Jennifer Connelly in Dario Argento's "Phenomena," but Lohman is quite the good sport. Justin Long fits the bill as Christine's skeptical but supportive boyfriend, a psychology grad student. And Dileep Rao and Adriana Barraza, respectively, as the psychic and medium play their roles with conviction.

Ivan and Sam Raimi's script is sly and the direction inventive, with caterwauling sound effects and Christopher Young's jolting, histrionic string musical score just right. All that's missing is a groovy cameo by B-movie favorite Bruce Campbell. Even while Raimi has a ball spewing liquids at us, he follows the story to its logical conclusion of unapologetically grim, unmitigated evil. The bread crumbs are laid out so we see the ending coming ahead, but Raimi still subverts our expectations. "Drag Me to Hell" not only surprises by being the real deal for a PG-13 genre piece, but it's a delightfully old-school, more than welcome treat for horror fans. Sam Raimi shows everyone how it's done.