Silly "Rome" does what it sets out do, nothing more 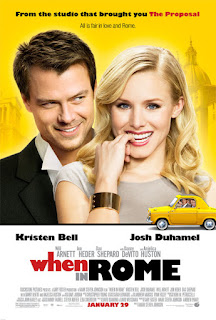 "When in Rome "doesn't fully do what you want a rom-com to do, but it will do for now until something better comes along. Kristen Bell plays Beth, a dedicated, Type-A curator at the Guggenheim Museum, who makes a 48-hour visit to Rome for her younger sister's wedding and meets the charming best man Nick (Josh Duhamel), a journalist and former college football player. After too much champagne, Beth fishes four coins (and a poker chip) out of the Fontana de Amore that attract five men.

It's cheesy magic, go with it.

Once she gets back to New York, a quartet of creepy men—poor painter Will Arnett, egotistical model Dax Shepard, Criss Angel-wannabe illusionist Jon Heder, and sausage magnate Danny Devito—start stalking her in hopes of wooing her, but she's sweet on Nick and same with him on her.

Director Mark Steven Johnson doesn't always have a hand on comic timing from the willfully cloddish script by writers David Diamond and David Weissman, whom you can thank for penning last year's dog "Old Dogs." But Bell has such a girl-next-door charm and Duhamel is dashing, and make an appealing couple. Despite the dumb slapstick and strained plotting, the stars' likability and a game supporting cast make it pleasantly entertaining and get you through it. A physical comic gag, where Beth has trouble breaking a vase upon her toast as an Italian tradition, is initially amusing but strains past its expiration date, and Duhamel is forced to do a lot of broad, labored slapstick (his character is apparently supposed to be clumsy).

One inspiredly daffy moment is a date at a blacked-out restaurant where customers eat in total darkness (hosted by ridiculously upbeat Flight of the Conchords performer Kristen Schaal wearing night goggles). As we're inundated by the pathetic state of the genre, we'll take acceptably cute, if forgettable, fluff like "When in Rome" that won't make you want to claw your eyes out.