"King's Speech" calculated but Firth-Rush pairing makes it a joy 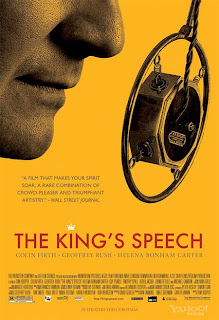 Get over the fact that "The King's Speech" looks like another stuffy costume drama and calculated Oscar bait. Only stuttering in the unsurprising nature of the story, it's a joy to watch if you revere language more than action.

King George V's son, the Duke of York/Prince Albert (Colin Firth), has a speech impediment, which prevents him from standing up to the microphone to give a public speech. He conquers his nerves after his wife Elizabeth (Helena Bonham Carter) seeks out a speech therapist, Lionel Logue (Geoffrey Rush), a failed Australian actor fond of Shakespeare and music. He's an unorthodox therapist, even calling the prince “Bertie,” as he's known by his confidantes, and has him listen to Beethoven's Seventh without focusing on his words. When the King (Michael Gambon) passes, the throne is passed down to eldest son King Edward VIII (Guy Pearce), and it proves short-lived when he resigns his duty to marry a divorcee. Next in line is Bertie, and taking the royal crown just might become possible to go on radio in 1939 to support the declaration of war on Hitler's Germany.

A historically factual period piece, "The King's Speech" is approached with a laid-back charm by director Tom Hooper and screenwriter David Seidler. The relationship between Bertie and Lionel becomes the core of the film and, of course, the leading up to the king's speech. The only real villain, other than the upcoming war, is the microphone! It's a great story from a history book, with delightfully witty writing, but actually follows a tried-and-true formula—an underdog tale with a hint of a mismatched-buddy flick. Even Hooper shoots it rather ordinarily with cinematographer Danny Cohen's wide-lense, fish-eye framing. It's not that it looks flat; the film certainly glistens, but some shots too precisely stick by the rule-of-thirds. The costume design is (natch) first-rate as well.

Truly, "The King's Speech" is a real actor's piece. All three actors carry their weight and bring the dry storytelling color and humor. Colin Firth has flawlessly mastered his stammering, where the tic never feels affected, and it's an endearing, moving performance without being mannered. When losing his cool, he warbles a symphony of (substitute “bugger”) cursing; it's a hoot and the only reason the film was released with an R rating. As the film comes to its climax (George VI's first wartime speech over the radio), we hold our breath and root for him. Firth finds his match in Geoffrey Rush, who's an irreverent treat. He's basically the comic relief and a king of sly, crackling wit. Also, sliding back into her costume dramas, Helena Bonham Carter brings warmth and sharp humor as Bertie's no-nonsense but adoring wife, the Queen Mum.

It might not have a lot of staying power after the Oscar season, as it's pretty safe, but for anyone's money, it's Firth and Rush who make "The King's Speech" enjoyable.