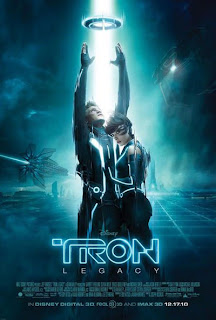 Disney's 1982 light-show video-game "TRON" was, in its day, visually spectacular and technologically cutting-edge in its live-action/animation effects but hardly a classic. But all that glitters is gold and same goes for the effects in "TRON: Legacy," the sleek, exciting reboot/sequel that's had a long life in development. Now, if getting stuck in a computer or a video game is your idea of fun, "TRON: Legacy" should make a solid razzle-dazzle ride. Jeff Bridges reprises his role as Kevin Flynn, a famous virtual world programmer who mysteriously disappears into The Grid, again, now leaving his rebellious 27-year-old son Sam (Garrett Hedlund) since he was 7. After a late night visit to his father's owned arcade, Sam also gets sucked into the Grid, realizing that his father has been trapped by his dictating avatar Clu (also played by Bridges via motion-capture technology that makes the actor look waxy and creepily de-aged).

Bridges is obviously having fun, playing both Flynn and Clu, bringing his charisma and even some of his Dude-ish jokiness from The Big Lebowski ("You're messing with my Zen thing, man"). Unfortunately, the original's second carry-over, Bruce Boxleitner, as Tron/Alan Bradley makes an early appearance and then vanishes. Hedlund is hunky, pretty stoic and cocky, but a good enough hero. Olivia Wilde is sexy and scrappy in black, skin-tight leather as Kevin's loyal companion and Sam's new sidekick, Quorra. And the most lively is Michael Sheen's brief but flamboyant turn, a campy channelling between David Bowie and Alan Cumming, as Zuse, a frosty-haired entertainment club host.

Overlooking the nearly indecipherable story and thin characters, "TRON: Legacy" moves well and looks hyper-cool. For his feature debut and for what is essentially a cinematic video-game, director Joseph Kosinski shows a real visual clarity for the chase action and immerses us into this futuristic realm. The cyberspace effects are gorgeously rendered and the artificial space is excitingly staged, but the rules and stakes inside this world and The Grid itself are cursorily conceived. The super-speed, neon-light Frisbee throwdowns are neat, where a disc can shatter a gladiator into glassy fragments. Perfectly integrated into the environment is the pounding musical score by electronic/rave French duo Daft Punk that brings an awesomely funky '80s vibe.

As expected for a style-over-substance exercise as this, nothing is really going on below the surface with little emotional involvement in the father-son relationship or anybody else. However, with that said, gamers should embrace "TRON: Legacy" with robust enthusiasm, and even for a lot of smoke and mirrors, it's a giddy poporn-movie blast.