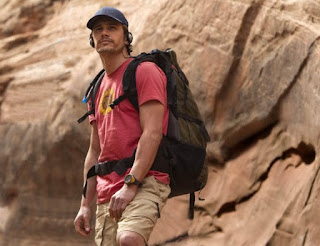 You should always tell someone when you go away. Especially somewhere in the middle of nowhere. Aron Ralston didn't. Big oops!

James Franco is ideally cast, with kind of a surfer-dude freespiritedness, in his one-man show as a thrill-seeking engineer and outdoorsman who decides to go hiking, biking, and climbing in Blue John Canyon, near Moab, Utah, for a weekend in April 2003. He videotapes a daily video diary during his adventure. Aron runs into two backpacking strangers, Kristi and Megan (the vivacious Kate Mara and Amber Tamblyn), and agrees to be their tour guide.


Shortly after they part, one slip sends Aron toppling down a rocky crevice, where a boulder pins his arm and traps it against the canyon wall for 127 hours. With food and water supply running low, Aron flashbacks to family (Treat Williams and Kate Burton as his parents, and Lizzy Caplan his sister) and an old girlfriend (Clémence Poésy) and ultimately hallucinates from dehydration. No one can hear him scream.

It's a true story and writer-director Danny Boyle, co-adapting with Simon Beaufoy adapts survivor Ralston's book “Between a Rock and a Hard Place,” pulls out all the stops, maintaining energy even as Aron lies stuck in this static situation. Franco doesn't make Aron a hero, but a lone wolf and a hedonist in a perilous situation that realizes his selfishness and mistakes. He shows every nuance of his range, from the deep despair to some trippy comedy during Aron's thirsty stage when he makes up a radio show while stuck.

You'll be glad you have hands to cover your eyes during the intensely powerful scene when Franco performs a self-amputation on his hand with a dull blade out of desperation and courage. (Viewers have been known to walk out or faint at early screenings.)

Boyle infuses his vibrant signature style of clever, kinetic camera work (with shots slurping through water bottles), split screens, and a rocking soundtrack without any of it becoming distracting: it's a sensory feast. His previous cinematographer Anthony Dod Mantle with Enrique Chediak shoot incredibly within a small space and their camera flies through the air (a fast tracking shot showing that no one, not even a plane, can find Aron), capturing the beautiful vastness of Utah as well as the desolate isolation.

127 Hours is a harrowing, riveting, invigorating cinematic experience that one may only want to see once, but it's a triumphant survival story punched up even more by a great filmmaker.