"The Unborn" unfathomable as a horror film 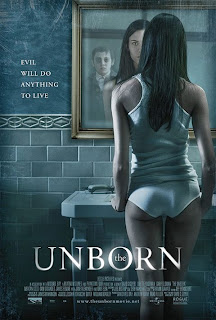 This laughable nonsense of dark mental institutions, exorcisms, Auschwitz twin experiments, and freaky mirrors may as well be a spoof of "The Exorcist" since it inadvertently has a higher ratio of giggles over chills. In "The Unborn," Windy City college student Casey, aka Hot Young Thing (Odette Yustman, sort of a body double for Megan Fox), has a weird dream involving a missing glove, a pooch wearing a paper mache mask, and a buried fetus. She also starts seeing a zombie-looking boy that leaps out at her from her medicine cabinet, and finds potato bugs when she cracks eggs. What could it all mean?! Well, Hot Young Thing discovers from her widower father (James Remar) that she had a twin brother nicknamed Jumby (any relation to Gumby?) who died in utero before her clinically depressed mother (Carla Cugino) committed suicide. Then her Holocaust-survivor grandmother (Jane Alexander, who's mainly a voice box for convoluted exposition) explains that an old dybbuk, or spirit, runs in their family and is out to possess hot, young Casey in an attempt to cross over into the real world by way of her unborn sibling. Wait, what?

"The Unborn" has a few would-be shocks, such as a canine with an upside-down head as well as a geriatric patient doing a Linda Blair crabwalk up the stairs, but they're mostly smoke and mirrors. Pure lunacy culminates to a climactic exorcism, where Gary Oldman looking rightfully confused as Rabbi Sendak (laughably) blows a long animal horn ... come on, Gary, this is so beneath you. Jumby the Evil Twin must be very good at finding the power boxes too in every big mansion he terrorizes, and who knew glory holes in night club restrooms could be so darn frightening? Miss Yustman spends most of the movie waltzing around in her skimpy undies showing off her derriere and cute figure. It's also funny how absent James Remar is for all of the movie; he seemed to have walked on set, said “Sure, I'll play the father for two scenes,” and is never heard from again, as Casey and her friends seem to live in large, stately homes all by themselves. The only genuine fright during this idiotic, unscary production is that it's not another remake of an Asian film, but rather that American co-scribe David S. Goyer of "The Dark Knight" actually wrote and directed it, and actually expected us to get the heebie jeebies.