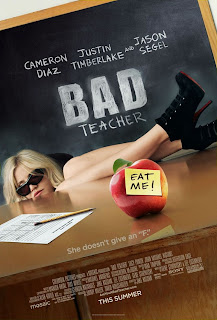 Move over "Bad Santa," there's a new bad apple (Bad Mrs. Santa?) in "Bad Teacher," a gleefully rude, enjoyably mean-spirited if pretty slight comedy. Cameron Diaz may not be getting any younger, but there's still something about Mary, er, Cam that screams "Let's misbehave!" behind that wide Joker smile and smeary makeup of hers.

And misbehave she sure does, running with the role of antiheroine Elizabeth Halsey, an unapologetic, foul-mouthed, boozy, bong-hitting viper who doesn't give an "F" unless it involves gold-digging. Once her sugar-daddy fiancee (Nat Faxon) realizes her true colors and dumps her, Elizabeth returns back to the Illinois school that she left before summer vacation to teach a 7th grade class at a bare-minimum work level. The thing is, she doesn't know much about teaching. She blatantly disregards the syllabus. She pops in movies like "Stand and Deliver," "Dangerous Minds," and "Scream" to "educate" the kids while she sleeps off her hangovers at her desk. And she doesn't even bother learning her students' names. For all the wrong reasons, Elizabeth's big plan is to get a boob job so it can help her woo Scott Delacorte (Justin Timberlake), the preppy but dense and sappy new substitute who comes from old money. So she spends the rest of the school year finding ways to earn cash by any means necessary, even if that means stealing the show (and money) at a student car-washing fundraiser, bribing her pupils' parents, and stealing the standardized exam forms so her class will score the highest and win her a big, fat bonus. But the uber-chippy, goody-two-shoes teacher across the hall, Miss Squirrel (Lucy Punch), is onto Elizabeth's scheme, and the school's gym teacher, Russell (Jason Segal), is hot for teacher.

For a one-joke movie, "Bad Teacher" is quick-paced and never overstays its welcome at just under 90 minutes. Not to sound contradictory, but at the same time, the movie moves at such a breakneck pace that it ultimately never congeals into a fully formed whole. Rather, it's just a series of scenes and bits. Director Jake Kasdan ("Walk Hard: The Dewey Cox Story") even flattens gag punchlines with obvious cutaways of erections and semen stains (just see the movie and you'll understand why). Still, there's a consistent breeziness to "Bad Teacher," earning plenty of smiles and just enough laughs.

It's the cast that really earns its apple. To begin with, Elizabeth is more of a sketch than a character (as Miss Squirrel quarrels, "We know nothing about her!"). She isn't particularly lovable or hateful—she's just a selfish, unethical, criminal schemer who needs to reconsider her priorities—but Diaz gives it all the game she's got that she gets away with murder. And this movie makes good use of her sex (at nearly 40) appeal, too, as she turns the school car wash into a wet T-shirt jiggle show in her roll-up and Daisy Dukes. 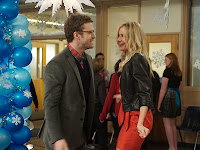 Timberlake is in self-conscious dunce-dork mode, but he gives it his best amusing shot, poking fun at his popstar status as he sings for the faculty-band Period Five. Lucky for him, he gets to share with his real-life ex-girlfriend Diaz one of the unsexiest dry-humping scenes in a comedy the world over. Segal, once again, proves his comic likability and flair for sarcasm as Elizabeth's simpatico match. Punch shows the most gusto, playing Elizabeth's adversary Miss Squirrel with a perfectly demented blend of perkiness and nuttiness. What could've been a truly annoying part, the blossoming British comic has such a zany, out-there energy about her and does a lot with her teeth and body language. Phyllis Smith (who plays Phyllis on TV's "The Office") has small great, endearingly awkward moments as meek co-worker Lynn who's thrilled being in the company of a reprobate. Every time she appears, her nervous-geeky smile and sly line delivery, like "I went to the zoo every weekend," is priceless. Rounding out much smaller roles but still hitting the mark are John Michael Higgins, as the square, dolphin-loving Principal Snur; Thomas Lennon, as the creepy-weird state test administrator; and Eric Stonestreet (the flamboyant Cameron on TV's "Modern Family") in a "straight" role as Elizabeth's intimidating Craigslist roommate.

Director Kasdan and "Office" writing partners Gene Stupnitsky and Lee Eisenberg stick to their guns and don't bash us over the heads with an abrupt turnaround or redemption arc for Elizabeth. Yes, she does end up turning over a new leaf, but it's plausibly handled without losing her true nature.

It's not as smartly scripted as the school-set "Election" or "School of Rock" and doesn't work up the deliciously nasty nerve of the instant classic "Bad Santa," but better than expected. "Bad Teacher" makes the grade as naughty, R-rated summer fun while we wait for Hollywood to turn out edgier, "badder" assignments.