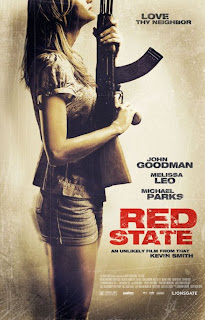 How brave of filmmaker Kevin Smith to venture out of his comfort zone and show some artistic growth with "Red State," a fierce, bizarro horror film about a fundamentalist sect that ultra-conservatives and Nazis even find to be nucking futz. Yes, a horror film written and directed by the man who gave us 1994's $27,000-budgeted indie "Clerks." that spurred on a cult fanbase and took on religion before in his audacious 1999 comedy "Dogma." What's more, he's made the film for $4 million and chose to independently distribute it rather than finance through a studio system (Harvey Weinstein took a pass this time). After the obnoxious bomb "Cop Out" (which Smith directed but did not script), "Red State" puts Smith back on the mark as a filmmaker.

Three horny teen boys, Travis (Michael Angarano), Jarod (Kyle Gallner), and Billy-Ray (Nicholas Braun), take to an invitation from a woman they meet on the Internet who agrees to have sex. The rendezvous in the town of Cooper Dell turns out to be in a trailer with Sara (Melissa Leo). She drugs the trio, and they wake up to the congregation of Pastor Abin Cooper (Michael Parks) and his Five Points Trinity Church of extreme fundamentalists who routinely find sinners and do away with them. As the boys try escaping, a military task force, led by ATF Agent Joseph Keenan (John Goodman), shows up outside the Cooper family's property and all Hell is about to break loose.

Using the massively homophobic Fred Phelps and his Westboro Baptist Church as a template for the Coopers, "Red State" doesn't exactly feel or look like a Kevin Smith movie. And, given the title, it's actually not taking shots at the Republican party, either. It is horror and satire, but it changes gears into a guns-blasting action film with all sorts of off-kilter, genre-defying touches, like Quentin Tarantino by way of the Coen Brothers. Smith never makes his message simple but surely makes some points about hypocrisy and fanaticism without feeling overly pretentious or preachy. Nearly every character is deplorable without making the rest of the movie deplorable (take note, Rob Zombie). Travis, Jarod, and Billy-Ray are even written as Neanderthals, but there still is apprehension in their plight. Smith gives us so many surprises in how he handles his characters—no one's fate is ever safe and our expectations are hijacked repeatedly.

As over-the-top as evangelists are often portrayed, the performances are powerfully spot-on without turning into caricatures. Michael Parks is full of fire and brimstone, completely sinking his teeth into the extreme, unsettling role of Pastor Cooper without losing his footing in reality. When we first officially meet him, he gives a 10-minute sermon that initially feels like Smith getting carried away with hearing himself talk, but Parks makes it positively chilling. Melissa Leo is disturbingly excellent as Cooper's daughter Sara, who leads the boys to the trailer. John Goodman, who doesn't show up until halfway, is the closest to being a lead or a character worth rooting for in a conventional sense. Early on, he delivers a wordy "monologue" (a conversation on the phone with his superior whose dialogue is never heard), but it is his one-man show. This is a fully committed performance from Goodman, as he brings a sarcastic wit and weariness to the role of Joseph Keenan and at one point, in the midst of all the gunfire with the Cooper clan, spouts a hilarious catchphrase: "Simple just shit itself!"

In any of his previous work, Smith has never brought a particularly polished or nifty visual style, usually consisting of a point-and-shoot style. So, from a technical sense, consider "Red State" to be his most passionately directed accomplishments as a filmmaker. The camera work is kinetic yet controlled and effectively visceral, especially when one of the teenage boys finds himself running from the Coopers and the camera never loses him. Provocative, harrowing, and uncompromising, "Red State" puts its hooks into you and doesn't let go.