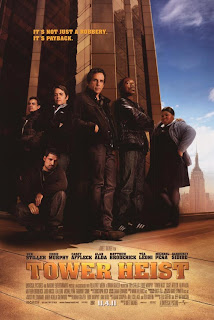 Commercial movie-maker Brett Ratner has a niche out of making big, surfacey but fun popcorn movies that are all about the benjamins. Nothing wrong with a little escapist entertainment, especially when he's a more competent showman than either Renny Harlin or Michael Bay. What's most surprising about "Tower Heist," a breezily paced, slickly made, entertaining caper-comedy, is how it feels more relevant in our desperate economic times than it has to be. Also, it's surprisingly less lazy than Steven Soderbergh's we're-so-cool, just-ask-us Danny Ocean trilogy.

Waking up early every morning to leave his Astoria, Queens neighborhood and go to work, Josh Kovacs (Ben Stiller) manages the staff at a luxurious Manhattan apartment high-rise called The Tower (played by Trump Tower). Occupying the penthouse suite, with a roof-top swimming pool, is charismatic multi-millionaire Arthur Shaw (Alan Alda), who's catered to by Kovacs' staff, until this Bernie Madoff-inspired swindler pulls a Ponzi scheme and is arrested for fraud. Josh had entrusted his hard-working employees' pensions with Shaw to triple their portfolios. In a fit of rage, Josh smashes Mr. Shaw's red Ferrari (it belonged to Steve McQueen) for revenge and ends up being fired, along with constantly tardy desk concierge Charlie (Casey Affleck) and the new elevator operator Enrique (Michael Peña). There's also Mr. Fitzhugh (Matthew Broderick), a Wall Street-trading tenant evicted from The Tower after going bankrupt. These four band together and plan to steal $20 million from Shaw's safe; the thing is, none of them have skill sets in pulling off a heist. Thinking quick, Josh bails out doo-ragged Slide (Eddie Murphy), a loudmouth hustler/cat burglar from Astoria whom went to day care with Josh.

A sort of poor-stealing-from-the-rich, Robin Hood caper, "Tower Heist" isn't just another buddy-comedy, like a cash-in on Ratner's "Rush Hour" movies, but feels like a heist picture from the 1970s. Obviously, this isn't the most elaborate and sophisticated heist, or even that clever, but the joke is that these clock-punching peasants are conspiring to storm the castle and steal everything back. For Slide's training session, he has each unlikely burglar shoplift something worth more than $50 from inside a mall. In order for the caper to work, director Ratner keeps the pacing consistently brisk and sets up some lively action and obstacles that are completely preposterous. When the heist is pulled, it's over the morning of the Macy's Thanksgiving Day Parade, where said Ferrari dangles from Shaw's penthouse but couldn't possibly be noticed by the crowds below or the derring-do in an elevator shaft. Even for the times of computer-generated effects, there's an excitingly staged, cliffhanging set piece that could've felt like an incongruous stunt but actually raises the stakes and feels as if the characters are really in danger.

For once, Stiller is not resorted to becoming knee-deep in embarrassment or humiliation, but is given one of his more likable straight-man roles in quite a while. After trading his toothy grin and wound-up comedic vigor for wearing fat suits, voicing animated donkeys, and playing live-action workaholic dads, Murphy finally re-emerges as the coarse, sass-mouth Murphy of his "48 Hours" and "Beverly Hills Cop" days. He hasn't been this funny on screen in years, but oddly, Murphy's Slide is forced to lay low for the climax. This is certainly an ensemble movie, but not everyone in the line-up is dealt an equal hand by the material. As Arthur Shaw, Alda reliably oozes nice-guy charm and flashy, snaky deceit. Affleck mostly plays clueless well as Charlie, also Josh's flustered brother-in-law whose pregnant wife's belly could pop any minute. Peña earns plenty of laughs as Enrique, including his surprising delivery with a joke about the Hilary Swank film "Boys Don't Cry." Broderick works in his high-strung, sadsacky shtick as the ex-stock trader. Leoni is tough and funny as the hard-as-nails FBI agent on the case, but doesn't really get the screen time she deserves. There's really only one scene (a drunken flirt with Stiller) that shows off her sharp comic timing. The Oscar-nominated Gabourey Sidibe ("Precious") has some much-needed fun as a grumpy Jamaican maid named Odessa, who can crack a safe in fifteen minutes flat. But her one-on-one scenes with Murphy are few, setting up sexual tension between them and then forgetting about it entirely. Stephen McKinley Henderson portrays dedicated but ready-to-retire doorman Lester with a backstory that feels very real and touching, but he never really gets in on the scheme (unless moving a truck as a diversion counts).

Before the movie was in the can, the many-hands script was rewritten again and again before just being credited to Ted Griffin and Jeff Nathanson (and Griffin, Bill Collage, and Adam Cooper for story), but it still has a first-draft feel. Thus, we could needlessly nitpick all day until going blue in the face. There's no rhyme or reason to some of the heist details (how do these bumbling burglars even change Shaw's court date? A Snoopy balloon is the only distraction the security staff needs?), and not all of the plot points pay off. There's a non-starter of a fling between Stiller and Leoni who reserve a weekend date, but that date is just fluffed over, so see their flirtation in "Flirting with Disaster" from fifteen years ago (which co-starred Alda as well). And a few late-in-the-game twists weren't that necessary. As most of Ratner's movies go, "Tower Heist" isn't a full meal but if it's fun going down, then why not?