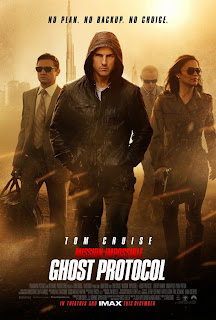 Your mission, if you choose to accept it, is to agree that animator Brad Bird has done the impossible and engineered the best movie in the spread-out "Mission: Impossible" canon. Brian De Palma started out the TV series-inspired franchise on a narratively convoluted but often exciting note with 1996's "Mission: Impossible." In 2000, John Woo's "Mission: Impossible II" brought a cartoony, Hong Kong-style that made for a lively entertainment. And most recently, until now, was 2006's "Mission: Impossible III," where J.J. Abrams cranked up the concept into higher gear. While all of them had some wildly exciting stunts and plot twists from a distinctly different filmmaker, the fourth, "Mission: Impossible - Ghost Protocol," moves the quickest on its feet between the breathtaking set pieces.

The first time in five years since he was married, we find Ethan Hunt (Tom Cruise) being held in a Moscow prison, but obviously not for long. His Impossible Missions Force operatives, communications specialist Benji (Simon Pegg) and new agent Jane (Paula Patton), engineer an exit strategy to transport Ethan out. Once out, Ethan and his team must steal a file full of nuclear launch codes inside the Kremlin, but on his way out, someone blows up the Kremlin, framing Ethan for the bombing and the government disavowing his team. Then, according to the IMF Secretary (Tom Wilkinson), the President has shut them down and initiated "ghost protocol," so Ethan and company gain an analyst named Brandt (Jeremy Renner) and go rogue to stop Soviet madman Hendricks (Michael Nyqvist) from starting World War III.

Bird, making his foray into live-action after a memorable stint with 1999's "The Iron Giant," 2004's "The Incredibles," and 2007's "Ratatouille," will make Michael Bay cry in his sleep. Compare "M: I - GP" to any headache Bay has helmed, and you'll notice the difference between gripping us at the edge of our seats versus pummeling us into submission. From the very first shot, the camerawork is fluid, the action thrilling, and the effects seamlessly integrated. Of the film's many enjoyable stunts, the one in Dubai really makes the palms sweat and forces vertigo to set in. Mr. Cruise scaling the outside of the Burj Khalifa, the tallest building in the world, to the 130th floor with a pair of thermo gloves. When most action movies attempt a dangerous stunt, it feels as fake as someone flying in front of a green-screen, but Bird seems to actually be dangling his movie star just for our own visceral pleasure. You know safety wires were probably erased in post, and that Mr. Cruise will not go splat! to the cement, but one can practically feel the wind whipping in your ears. It's a fantastically hairy showstopper. There's also a giddily tense scheme to swipe the codes from the Kremlin's archival room using a hallway illusion gadget; an awesome chase through a sandstorm in Dubai; and a goofily over-the-top countdown-until-annihilation climax set in an automated parking garage. Even based on Bird's animation background, the opening credits—with Michael Giacchino's music score mixed with the iconic Lalo Schifrin theme—feel right out of a Looney Tunes cartoon.

Reminding us in last year's "Knight and Day" that he's not going anywhere, Cruise proves again he's still a movie star and stuntman. Just shy of fifty, he has such a magnetic presence and charisma, and tops all of the stunts he's done before. Also a bonus, none of Cruise's vain celebrity or bizarre Scientology persona gets in the way of his Ethan Hunt character. Pegg returns from the last "Mission" as Benji, the very welcome comic relief. Two new additions to the team are Patton, sexy and athletic with inner conflict as the lone female agent (who gets to kick ass with a pouty female French assassin), and the good-looking Renner, adding more magnetism as Brandt. Playing villain Cobalt, Nyqvist (who played Mikael Blomkvist in the original Swedish version of "The Girl with the Dragon Tattoo") isn't the most interesting villain, but he functions just fine.
Screenwriters Josh Appelbaum and André Nemec don't really link any reason to why Ethan's team must globetrot from Russia to Dubai to Mumbai, but when it comes down to Bird's spectacular staging and sense of pacing, narrative holes don't really matter. Moments of exposition and character-building give the film some substance but never let the pacing droop or lag. And the 133 minutes just fly by. Big and a whole lot of fun, "Mission: Impossible - Ghost Protocol" is an exhilarating rush, and far and away the most consistently paced.