"Don't Go in the Woods" Makes For Distinguished Slasher-Musical 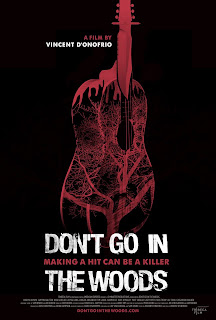 Serious-minded lead singer Nick (Matt Sbeglia) takes his five-guy indie rock band out into the woods for some "song-writing air" to write their new album. Ignoring a posted sign that reads "Don't Go in the Woods," Nick chooses the camping site where he and his now-deceased brother used to go as kids. The guys just want to have a good time, so Nick confiscates their cell phones, booze, and weed to lessen any distraction. (He irrationally takes an axe to all of their cells, just to be safe.) Then that night, Nick's ex, Ashley (Cassandra Walker), and her group of groupie-girlfriends spring a surprise on them, crashing their band time. Worse, someone with a mallet starts hacking them apart one by one.

A slasher flick with tunes, "Don't Go in the Woods" seems like connecting those bridges might not feel cohesive or would fall into camp, but that's often the benefit of having little resources. It still has a rough-hewn, let's-make-a-movie spirit, that of an early Sam Raimi movie. There are no overproduced song-and-dance numbers, just characters occasionally breaking out into song when they're not strumming on a guitar. And surprisingly, the acoustic-emo songs are catchy and edgy. From a script by Sam Bisbee and Joe Vinciguerra, the characters are a tad more intelligent than the vapid stereotypes characteristic of this genre, including a blind band member and a foreign girl still practicing the English language. The unknown actors' vocals are more assured than their acting skills, but Sbeglia is earnest and intense, hitting just the right notes as this scarily dedicated bandmaster.

We're already well into the movie when the trees get painted red, so to speak, but the kills come quick and bloody. There's also a surprising plot twist that might have felt unoriginal had it been played out with perfunctory flashbacks, but it twistedly works, and so does the macabre punchline. Having blood, music, and a sense of humor in the same movie are never above "Don't Go in the Woods."