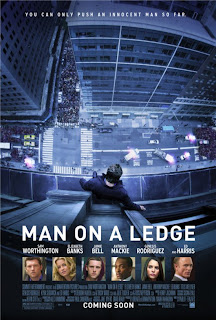 Studio execs like to use January as a cleaning month to sweep their bad movies out of the warehouse, immediately after the holiday months release so many Oscar contenders. "Man on a Ledge" may be a late-January thriller, but it doesn't stink up the place. It's just a dispensable, halfway-decent genre programmer that almost plays like last year's fun, light-footed "Tower Heist." As directed by narrative first-timer Asger Leth (breaking into Hollywood after his 2006 doc "Ghosts of Cité Soleil"), the film stalls little time in setting up its tense, high-stakes hook—a man on the ledge of a high-rise building—but doesn't sustain enough suspense nor cooks up many surprises for any replay value. 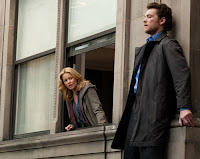 Nick Cassidy (Sam Worthington) checks into a room to midtown Manhattan's Roosevelt Hotel, orders his last supper, and then climbs onto the ledge outside his window. He threatens to jump, as the bystanders and TV crew swarm and gawk from down below like vultures, and then the NYPD is quick to head to the scene. Refusing the assistance of any male cop, Nick specifically requests Lydia Mercer (Elizabeth Banks), a disgraced negotiator and police psychologist. But she won't need to sing Third Eye Blind's "Jumper" to coax him out of jumping because he's actually a wrongfully imprisoned ex-cop wanted for supposedly stealing a $40 million diamond and escaping from Sing Sing during his father's funeral. His suicide attempt is solely a diversion to buy him time as Nick's younger brother, Joey (Jamie Bell), and girlfriend, Angie (Genesis Rodriguez), break and enter across the street into the diamond vault of smarmy real-estate shark David Englander (Ed Harris). Nick just wants to prove that he's an innocent man, but how long will he stay perched on that ledge? And when will the cops and Lydia realize he's not really going to jump?

"Man on a Ledge" marks the feature writing debut of Pablo F. Fenjves (whose previous credits include being the scribe for TV movies), and the B-movie script has no real delusions of grandeur. There's a small push of the timely "Haves vs. Have-Nots" zeitgeist, as when Nick tosses handfuls of cash to the streets like Robin Hood (or Al Pacino from "Dog Day Afternoon") and we hear that corrupt Englander "lost $30 million to Lehman Brothers," but that's where it ends. All of the characters mostly remain surface types and as necessities to the plot in one way or another, and some may not be as "good" or "bad" as they seem. Leth directs this "wronged man" heist thriller with minimal style but reasonable breeze and efficiency to truck things along. The height from that 21st-floor ledge down to the ground below is well-established from the outset by cinematographer Paul Cameron ("Collateral"). Intercutting between the burglary and the ledge spectacle, there's some tension and excitement, but it goes a bit slack as Nick keeps stalling for time and we're already steps ahead of the cops. The elaborate, gadget-oriented heist turns out to be the more entertaining section and makes admittedly cool use of heat-sensor alarms and security cameras. We're supposed to believe that burglary and theft are Nick's only options to prove his own innocence, and that Joey and Angie would actually risk serving hard time for stealing back a stinkin' diamond. But Joey and Angie have enough inexperienced close-calls to alleviate that implausibility with some amusing banter between the cat-burglar lovers.

Sam Worthington has been a block of wood in previous action-hero roles ("Avatar" and "Clash of the Titans"), and the written part of Nick doesn't really allow him to evidence much charisma or swagger. The sunny Elizabeth Banks would seem unfit to play damaged and hard-bitten, however, she comes the closest to playing an actual character. When we first meet her, she's not too unlike Charlize Theron's Mavis Gary in "Young Adult," schlepping out of bed with a major hangover. It's played for laughs, until we learn during her increasingly comfortable negotiation with Nick of Lydia's drinking problem stemming from a job-related incident that's pressed her with guilt.

The supporting cast is serviceable in underwritten parts, with Jamie Bell as Nick's ridiculously loyal brother Joey, Anthony Mackie as Nick's former partner Mike, Titus Welliver as the gum-chewing LAPD captain, and Jordana Brewster-lookalike Genesis Rodriguez as Joey's sassy, spicy-hot girlfriend Angie, who gets to strip down to her pushup bra and undies to shimmy down a ventilation system. A gaunt, suited-up Ed Harris is despicable enough, but just shows up to play a cardboard baddie, chomping on cigars and spewing heartless sarcasm; he just needed a mustache to twirl and call it a day. In complete throwaway roles, Edward Burns shows up as Officer Jack Dougherty, but quickly forgotten, and Kyra Sedgwick gets to roll her "R"s as cynical TV reporter Suzie Morales. 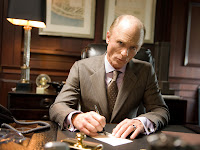 There's some fun, unpretentious frivolity in the going, but "Man on a Ledge" grows too far-fetched and mechanical, especially in its tiresome third act. All of the vertiginous peril gets pushed right off the ledge, just to shell out some 11th-hour double-crossing, an eye-rollingly risible action stunt involving the firemen's big, inflatable mattress, and a contrived "revelation" that, in retrospect, only adds another logic hole to the list. While the majority of this movie is set on a ledge, "Mission: Impossible - Ghost Protocol" more capably pulled off a palm-sweating, vertigo-inducing setting in a single set-piece, as well as a very similar hi-tech heist. With a tighter script and more edge-of-your-seat palpability, "Man on a Ledge" could've been a city pressure cooker like Joel Schumacher's "Phone Booth." As is, it should keep one alert but won't consistently grip or keep you on the (l)edge of your seat.