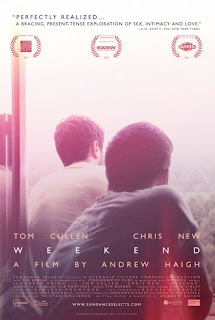 UK writer-director-editor Andrew Haigh's second feature "Weekend" is a nakedly candid, melancholy boy-meets-boy drama not in the traditional mainstream twofold. One most obviously being that it's a grown-up relationship between two men, and secondly, there are no guarantees the two characters will end up together. What makes the film so lovely and keen in its observations is that it doesn't constantly call attention to the two people being gay; they're just two people falling into a relationship. Russell (Tom Cullen), a pool lifeguard, is openly gay but very reserved when it comes to talking about his sexuality with his straight friends. One Friday night in Nottingham, he heads out alone to a gay club. Just before last call, he picks up Glen (Chris New), a proudly out art student, for a one-night stand. But by morning, they actually spend the day together and talk. However, Glen doesn't inform Russell until the last-minute that he will be leaving for America the next day for an art course. Will their lives forever change?

Russell keeps to himself mostly and doesn't flaunt his sexuality around. Glen is the opposite, more confident in his own skin and not afraid to talk about his sexual conquests with friends or confront homophobes. Their adverse personalities come together in one of the many quiet moments, in which Russell steps out of his comfort zone when Glen asks him to talk about their night together into a portable recorder for his art project. Russell and Glen talk a lot, but it allows us to understand that their relationship is more than just a fling. Tom Cullen and Chris New accurately convey two different kinds of homosexual men that never feel like swishy, glittery stereotypes whose idols are Cher and Liza.

Not a single moment of "Weekend" rings false. As a couple, the two actors click and their intimacy is so honestly raw that it feels like we're watching a documentary. The sex on display is so frank that it doesn't even feel suggested, but never feels gratuitous or pornographic for titillation's sake. The film stays so true to itself that there is no "'Notting Hill' moment" as Glen calls it, giving us a stronger emotional connection and arc for Russell. Will they ever see each other again? Only time will tell, of course, and if it's meant to be, it's meant to be. Andrew Haigh is such a confident filmmaker that he doesn't need to spell everything out or even include "where-are-they-now" title cards. "Weekend" is just that real.