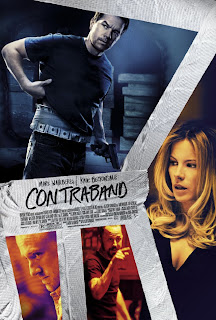 Contraband (2012)
109 min., rated R.
You've seen the proverbial "one last job" movie dozens of times before under different titles. For a big-studio release in January—ya know, the disreputable dumping month where movies go to die—"Contraband" is an overly familiar genre programmer, but more slick and entertaining than it has any business being if one's expectations are low. Nearly recommending mediocrity sounds like faint praise, but just don't expect the film to be about anything more than what it's about.

Chris Farraday (Mark Wahlberg) is a retired smuggler who's now on the straight-and-arrow. He's abandoned the crime life to settle down with his wife, Kate (Kate Beckinsale), and their two sons in Algiers, New Orleans, while running his own alarm-system business. But he's forced back into action when his screw-up brother-in-law, Andy (Caleb Landry Jones), fumbles a drug deal and is then hospitalized. A shipment of drugs has been dumped rather than delivered to tattooed gangster Tim Briggs (Giovanni Ribisi). Chris doesn't want to do another run, but it's family. So he and his team of confederate pros, including Chris's newlywedded right-hand man Danny (Lukas Haas), board a cargo ship to Panama City and plan to smuggle a palate of counterfeit bills back into the states to pay back Briggs. Kate and the boys are left in the hands of his pal Sebastian (Ben Foster), and that's where Briggs gets his revenge. Everything that could go wrong does.

Director Baltasar Kormákur efficiently assumes the helm for this U.S. remake of a 2008 Icelandic thriller, "Reykajavik-Rotterdam" (which starred Kormákur). He creates a gritty, rough-edged world that extracts the script's absurdity and diverts from some of the familiarity. Like so many action thrillers in this day and age, this one is mostly shot with a hand-held style by cinematographer Barry Ackroyd (who won an Oscar for 2008's "The Hurt Locker") but never incoherently. The first half-hour makes for a slow setup, but between the wrenches in Chris's elaborate caper and Chris's family being put into jeopardy, the stakes keep rising. In the film's midsection, the robbery on the ship generates some suspense, and the scenes where Chris and Danny try beating the clock in an armored car are excitingly staged and fun to watch. Their theft of a Jackson Pollock painting, which none of the thieves recognize except as "a cloth with oil smears," is an amusing touch. Some of the family-in-peril stuff with Kate constantly being terrorized and smacked around verges on dreary exploitation, but it still escalates with tension.

Working from a screenplay by tyro writer Aaron Guzikowski, an ensemble this solid and talented is better than the film deserves. Wahlberg has given some terrific performances in the past, starting with 1997's "Boogie Nights" and continuing with 2006's "The Departed." Then he did some interestingly offbeat work in 2004's "I Heart Huckabees," but gave a wooden, unintentionally funny performance in 2008's "The Happening." Here, he's sleepwalking, performing with his usual blue-collar swagger. Finding his niche in playing wound-up loose cannons, a greasy, scarily over-the-top Ribisi skeezes up his role of Briggs as much as possible. It's a mannered performance, but his weaselly characters are always a hoot to watch. Character actor Foster always livens up standard material, here playing the conflicted Sebastian. J.K. Simmons plays it amusingly straight as a crusty sea captain of the ship Chris's convict father (William Lucking) used to run contraband. Beckinsale tries her best with the most thankless role of Concerned Wife, which is simply a plot device as Kate becomes the pawn in the heavy's schemes.

Though the plotting gets a little convoluted and throws in a few twists you'll see coming, "Contraband" remains pretty absorbing. There's little character beyond the surface, although a few are a tiny bit more varied than mere shady types. Part of the script's problem is inherent with the action genre, in which there are few characters to root for: Everyone's so sleazy, unpleasant, and involved with shady dealings that even Chris walks a thin line between family man and smuggler.

With it being a month of the doldrums, "Contraband" is typical "does what it sets out to do" fare that should do for the start of the year, even if you forget about it by February. It's neither here nor there, but it's otherwise decent when delivering no-frills B-movie thrills. 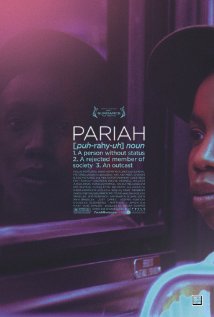 Pariah (2011)
86 min., rated R.
2011 must be the year of impressive directorial debuts, what with Joe Cornish's "Attack the Block," J.C. Chandor's "Margin Call," Evan Glodell's "Bellflower," and Sean Durkin's "Martha Marcy May Marlene," just to name a few. When the world of cinema sees the arrival of a fresh, singular voice, it's exciting to witness. While coming-of-age films are commonplace by now, "Pariah" is writer-director Dee Rees' coming-of-age/coming-out film about the coming-out of an African American lesbian. If more audiences actually caught sight of Rees's semi-biographical film, an expansion of her 2007 short, it might've found space on more Best of 2011 lists and received even more recognition. Her work ensures that there's a dearth of passion in Hollywood while independent filmmaking is still very much alive and doesn't always have to be labeled "quirky," "amateurish," and "boring." 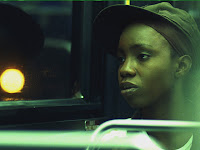 Alike (Adepero Oduye), going by "Lee," is a tomboyish 17-year-old high school junior living in a Brooklyn neighborhood. She's a good student, but struggles with her closeted sexuality at school and at home. When we first find Alike, the virgin is shyly watching a woman sliding down a pole at a club. Her butch best friend, Laura (Pernell Walker), is introducing Alike to new experiences. Once leaving the club, Alike takes off her androgynous AG-lesbian (aggressive) clothes, untucks her hair from underneath a baseball cap and du-rag, and puts her rings back in her ears. We can tell she's changing to put on her front at home. The way she dresses leaving for school and at school is different: Every morning in a bathroom stall, she'll change into the clothes that make her feel like herself. Her parents, uptight Audrey (Kim Wayans) and police officer Arthur (Charles Parnell), are conservative and both have an inkling about their daughter's sexual orientation but don't want to believe it, especially religious Audrey. Not thinking too highly of Laura and her influence, Audrey encourages Alike to befriend her co-worker's more respectable daughter, Bina (Aasha Davis), who attends the same school. Though they force their hang-out time to please their mothers at first, Alike and Bina realize they share the same taste in music and develop a friendship.

Raw, stirring, and independent-minded, "Pariah" radiates clear-eyed intelligence, sensitivity, and passion. It only looks like this year's "Precious" on the surface. While that terrific film was gut-wrenching and unshakable, this one is more subtle and pretty terrific on its own. Rees's script doesn't meander as much as it captures every facet of Alike's life, at home, at school, and in social situations. A subplot involving Dad arguing with Audrey and "working a lot" actually punctuates Alike's fear of coming out to her parents. The message of "Pariah" is plainly "be yourself." What the film says isn't revolutionary, but Alike's journey is an intimate, affecting, and ultimately uplifting one. The character's final passages from her poetic journal could feel too obvious and overt to illustrate the film's point, but she says just enough. None of it feels melodramatic, every note rings true, and the story thankfully doesn't overpack itself within a compact 86 minutes.

First and foremost, the emotional center of "Pariah" is Adepero Oduye. She's open, sympathetic, and authentic as Alike, a young woman that deserves to free her true spirit. (Interesting fact: You would never believe the actress playing a teenager is actually 33 years old.) Her character is never just a pawn in selling the filmmaker's message, but a fully fleshed-out person who has a talent with writing poetry and just wants to free herself from her shell and show her individuality. And the film is very matter-of-fact about this pariah's sexuality. The character never questions why she doesn't like boys; she likes girls, the end.

Pernell Walker is excellent as Laura, fully comfortable with her public image but struggling at home as she keeps a job to pay all the bills for her and her sister's apartment. She has a tough exterior but full of sensitivity. Aasha Davis is sweet and natural as Bina, whose character goes in unexpected directions. Among the sound performances across the board, Kim Wayans (the sister to the You-Know-Who Brothers) is also quite strong as Alike's closed-minded mother who suffers from some pain of her own. She tries buying more feminine dresses for her daughter and tells her that "God doesn't make mistakes." The character's reactions could've toppled into hyper-religious caricature, but Wayans's performance is controlled, nuanced, and even sympathetic.

A talented filmmaker on the rise, Rees has clearly put thought into her aesthetics, using her camera and lighting as a visual language for the context of the narrative. We peer into Alike's day-to-day life like a fly on the wall. Before Alike comes into her own, she's shot in small spaces with low, stylized lighting, until the shots become wider and the lighting brighter. The grittiness of the film's look also feels germane to the story and the Brooklyn setting rather than just heightening its indie credentials.

There is something to be said for movies that encourage teens—whether black or white, male or female, gay or straight—to feel comfortable in their own skin. And the world could use more films like "Pariah." With this story, audiences will realize the challenges and fears kids face in coming out of the closet. Far from a glossy, trite after-school special or eat-your-vegetables cinema, here's a universal example that specifically never feels short of real and relatable.