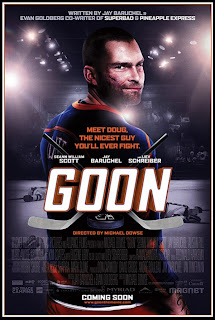 There are few other hockey movies that shed much blood on the ice and show it as the brutal blood sport it can unequivocally be as 1977's profane, blood-gushing "Slap Shot." Not 2004's "Miracle" and definitely not any of "The Mighty Ducks" movies. However, if you've been waiting for such a thing, "Goon" is the closest offspring to that Paul Newman starrer. Right from the opening titles, where drops of blood splash (along with an incisor) onto the ice, we know the film will deliver on its promise. Not only that, director Michael Dowse (2011's critically underrated "Take Me Home Tonight") and screenwriters Evan Goldberg (Seth Rogen's old pal and "Superbad" writing partner) and Jay Baruchel (who also co-stars) strike that tricky balance between a filthy mouth, brutish punches, and a warm heart.

Sean William Scott is tailor-made for the role of Doug Glatt, a nice but dim Boston bar bouncer who feels unaccomplished in his Jewish family of doctors. Making up for his lack of smarts is his hard fist, as it turns out when Doug attends a hockey game and beats up one of the bigoted players in defense of his gay brother. Soon after, on his obnoxious best buddy Pat's (Baruchel) hockey-fan broadcast, Doug gets picked up by the coach of his hometown hockey league to be the "enforcer." He can't skate too well, but that's no biggie since Doug is more of a fighter than a hockey player. After earning himself the nickname Doug "The Thug," he gets called to Canada to protect the Halifax Highlanders whose MVP player, Xavier Laflamme (Marc-André Grondin), is a coke-snorting mess ever since he got body-checked and concussed by opposing veteran enforcer Ross "The Boss" Rhea (Liev Schreiber). As a hockey goon that remains faithful to his team, Doug will be able to face off with Rhea on the ice and find a girl that likes him for being nice and tough, such as Eva (Alison Pill), who grows weak in the knees for ragged hockey players.

Adapted from the memoir "Goon: The True Story of an Unlikely Journey into Minor League Hockey" by Doug Smith an Adam Frattasio, "Goon" takes the true story and makes it more hard-hitting than your typical rags-to-riches story. But even under all the punches and blue verbal exchanges, Goldberg and Baruchel's acerbically funny script has telling moments of teamwork and sheds light on the role of the enforcer. Some of the character business could've been fleshed out even more, squarely a more satisfying wrap-up between Doug and his disagreeable parents (Eugene Levy, Ellen David). Pacing the film as fast as a puck and capturing the whole Canadian hockey milieu, director Dowse never allows the head-butting violence on the rink (sometimes ironically scored to Puccini's soothing opera) to break the comedy or the underlying dab of sweetness. There's also a tightness to the editing between the scenes on and off the ice; non-sports fans should even find the hockey footage in-your-face and ruthlessly exciting, where Doug gets to just do his thing.

Playing against type for once, Scott is not replaying his Stifler character from the "American Pie" films or any of his other loudmouth fratboy personas. In fact, Doug is far from being quick on his feet in the verbal sense; he's inarticulate with women and often socially inept. He'll even politely apologize before knocking a guy out. Scott gives Doug a simpleton puppy-dog charm to go along with his "fist of God," creating a dumb-as-a-puck goon that's more lovable than an irritating idiot. At one point, when a crying Eva meets him in the street, Doug asks, "Why are you crying? Did you just watch 'Rudy'?"

The wonderful Pill breathes fresh air into what otherwise could've been a cliché. Her Eva isn't the girl-next-door but a self-loathing, self-proclaimed "horny bitch" that drinks like a fish and cusses like a sailor. She guiltily considers herself a bad girlfriend in her present relationship after she briefly makes out with Doug, but that doesn't stop her from being appealing and a flawed human being. "You make me not want to sleep with a bunch of other guys," Eva endearingly tells Doug. As Doug's wisecracking buddy Pat, Baruchel has some of the funniest foul-mouthed lines in the film (or any film in a while), the Canadian native bringing out his own mania for hockey, too.

Played with unwinking handlebar-mustached menace and given brooding, cynical dimension by Schreiber, the world-weary Rhea is not merely a stock opponent. Before their inevitable showdown, Rhea has a sit-down conversation with Doug, saying he has "the stuff" but also makes it known that when it comes time, he'll lay him out. The angry coach (Kim Coates) and some of the other Highlander players (played by Jonathan Cherry, Ricky Mabe, and Richard Clarkin) are given one or two notes to play but still feel like they could actually exist out there. Most notable is Grondin (who gives off an Edward Furlong dirtiness and resembles Ezra Miller), shaping the misbehaving prima donna Laflamme into more than just the team's black sheep who Doug eventually reaches out to as his roommate.

Still adhering to a basic sports-movie formula, "Goon" is that rare, fresh underdog story that beats the crap out of your expectations. You can feel the hits and taste the blood, but as contradictory as it sounds, the film somehow warms your cockles in an unsentimental, uncondescending way, even if you know even less about the actual game of hockey than Doug. Despite its limited distribution, "Goon" deserves a shot in the big leagues.