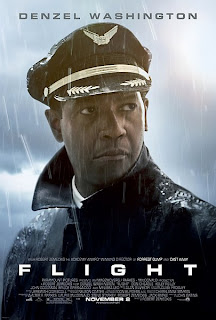 In the interim, director Robert Zemeckis pioneered state-of-the-art performance capture technology with "The Polar Express," "Beowulf," and "A Christmas Carol." The filmmaker wouldn't be one's immediate choice to helm a hard-hitting addiction drama, but in making his comeback to live-action cinema after 2000's "Cast Away," that's just what he's done with "Flight." From the man that made the shamelessly crowd-pleasing "Forrest Gump," this is an imperfect but provocative and engrossing film.

William "Whip" Whitaker (Denzel Washington) is a veteran airline pilot and a raging but functioning alcoholic. After a late night with a flight attendant (Nadine Velazquez), he's hung over, loaded on cocaine, and scheduled to fly from Florida to Atlanta in just a few hours. Once Whip, his crew, and 102 passengers take off and soar through turbulence, there's a malfunction that sends the plane into a nosedive. Whip successfully inverts the plane but crash lands into a field near a church. Afterward, 96 of the people on board survive and Whip is branded a hero. In the hospital, Whip meets Nicole (Kelly Reilly), a heroin addict, and promises to visit her when they both get out. When cleared to return home, he goes to stay on his late father's farm, where dumping out all the alcohol is step one. But as the investigation deepens, evidence is found that substances were in Whip's system at the time of the incident. As the toxicology report states, he was drunk at a 2.4 blood alcohol level, proof that his intoxication was the cause of death for the six people on the flight. Hugh Lang (Don Cheadle), a Chicago attorney specializing in criminal negligence, is brought in to defend the pilot. Falling off the wagon, Whip awaits the hearing but has already hit rock bottom.

"Flight" gets off to an absorbing start, Zemeckis knowing exactly how to stage the plane crash. The build-up to that moment grips us down and then once Whip capsizes the plane, it becomes one of the most stressfully intense, paralyzing set-pieces to grace the silver screen in a while. Not based on a true story but quite plausible, the screenplay by John Gatins (2011's "Real Steel") is unflinching enough to look addiction and denial straight in the face. Whip doesn't give up the drink, and he doesn't even try. When Whip is tempted by an open adjoining door to his hotel room that leads to a fully stocked fridge of alcohol, there's actually a "jump scare" of sorts involving a miniature bottle. Then at his hearing, where he's questioned by a straight-up investigator (Melissa Leo), Whip must face his own truth at his own pace. Also, intriguing ethical questions are raised: if other pilots simulated flying the same malfunctioned plane, is Whip still at fault? Is he a hero or an alcoholic that was saved by an Act of God?

After taking so many roles he can do in his sleep, Washington makes his return to playing flawed but interesting characters. From the moment we meet Whip, he shares a bed with a naked woman, has trouble answering his cell phone, smokes a cigarette, and then snorts a line of coke for breakfast, cut to the reckless man strutting down the jetway to fly a plane. Even on the flight, Whip secretly mixes himself a drink with three vodka miniatures. The charismatic actor has a way of just skirting the line of being unsympathetic and showy, as he throws a glass at a wall, but keeping the damaged character and the story compelling. It's a detailed, controlled, riveting, and even darkly funny performance.

British actress Reilly, doing a Southern accent, is impressively raw and supplies her Nicole with a complete character arc. Her relapse-cum-recovery story, which parallels Whip's own alcoholism, could be a film in itself. Early on, the two, along with a standout James Badge Dale as a cancer patient, share cigarettes and just talk about their respective situations in the stairwell. On an intimate level, it's a great scene. From there, Nicole holes up with Whip, and they don't fall in love as much as they just form a bond. Nicole becomes sober, but she knows she can't stay with Whip as long as he's still drinking. There's excellent support all around: John Goodman, with a ponytail, is in charge of the comic relief, hilariously bawdy and boisterous as Whip's supplier Harling; Cheadle and Bruce Greenwood, as Whip's pilot union rep Charlie Anderson, are both solid; and Tamara Tunie does layered work as a flight attendant who survives the accident but won't lie for Whip.

The religious agenda is a bit too preachy, laying it on with a heavy hand. In one particular scene, Whip decides to visit his co-pilot Ken (Brian Geraghty) and his wife (Bethany Ann Lind), who grabs her cross and repeatedly shouts "Praise Jesus!," in a hospital room with a cross clearly hung behind Ken's bed. Some of the music choices are a little ham-fisted but not totally irritating, including Joe Crocker's "Feelin' Alright," followed by an elevator cover of The Beatles' "With a Little Help from My Friends" after Whip has just gotten a coke fix from Harling, accompanied by, yes, his friends.

By the last five minutes, Whip's redemption becomes more abrupt and Hollywoodized when the previous 133 minutes painted a believable, no-bull portrait that resisted easy answers. The last line at least resonates when Whip's estranged 15-year-old son interviews him for a school essay, asking him "Who are you?" That's even too big of a question for Whip at this point. No matter, Zemeckis' direction is more confident than ever and Washington flies first-class.