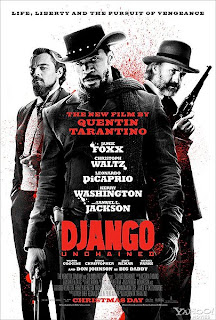 If a three-hour opera of grimy French people singing about their misery isn't your bag this Christmas, a three-hour western-cum-revenge-fantasy with slavery and violence might scream stocking stuffer. "Django Unchained" is every inch a Quentin Tarantino movie, from the film-geek pastiches to bloody '70s grindhouse cinema, blaxploitation and spaghetti westerns, to the anachronistic music cues, and lots of colorful dialogue for its actors to chew on. The writing-directing auteur knows a lot of movies, writes what he knows, and is never one to curb the pulpy, ultra-violent nature of the stories he spins or his use of profane language. (In fairness, the "n" epithet is contextual here.) That's just how Tarantino rolls.

It's 1858, two years before the advent of the Civil War, and set in the South. Traveling through the wilderness, guiding a stagecoach with an enlarged tooth wiggling on top, Dr. King Schultz (Christoph Waltz) comes across slave dealers marching a group of slaves. The cultured gentleman passes himself off as a dentist, though hasn't practiced in five years. "I'm just a customer trying to conduct a transaction," says Schultz, really a German-born bounty hunter, who offers to buy a slave by the name of Django (Jamie Foxx) and is on the trail of the three slave-whipping Brittle brothers. If Django can assist Schultz in his "flesh-for-cash business" as his blue-suited valet, he'll be granted his freedom and hopes to find his enslaved wife, Broomhilda (Kerry Washington). Everyone is slack-jawed over the sight of a black man riding a horse, but Django is now a free man. Under the guise of purchasing a Mandingo fighter, Django and Schultz then venture to "Candyland," a plantation owned by the snaky, sadistic Calvin Candie (Leonardo DiCaprio), who has Broomhilda.

Gleefully blood-spattered, devilishly funny, and dramatically cathartic, "Django Unchained" earns its stripes as a gutsy, joyously entertaining original, even when its conductor is mashing genres, testing boundaries of bad taste, and paying homage to his favorites as always. Besides shouting out to Sergio Corbucci's 1966 oater "Django" (star Franco Nero is credited for his "friendly participation" here) and 1975's "Mandingo," Tarantino toys with history in an ironic revisionist take on slavery in the South as he did with Nazis in his own "Inglourious Basterds." His films usually start out unhurried, then sprawl and meander, but it hardly matters because Tarantino's films are all his own, always feel like passion projects, and don't feel made from the Hollywood machine.

As with most, if not all, of Tarantino's joints, "Django Unchained" overflows with vigorous panache that never takes away from the storytelling, including quick pans, crash zooms, and grainy film stocks, but makes it an even more delirious experience. Robert Richardson's beautiful cinematography gushes Southern panorama as it does bloodshed, and the soundtrack is an eclectic sort, including western compositions by Ennio Morricone and contemporary rap by John Legend. And as the filmmaker is known for, there are long, dialogue-heavy scenes of characters shooting the breeze. Very few can write dialogue that's as witty and delicious like Tarantino. Other than a few indulgent stretches that seem as if Tarantino the director had to compromise with Tarantino the writer, this is a wild, wild ride.

Deservedly winning his Oscar for his delectably loony and menacing turn as "Jew Hunter" Hans Landa, Waltz is disarming and just plain terrific as always as the genteel, articulate Schultz who "kill[s] people and sell[s] their corpses for cash." As the title character Django ("the 'D' is silent"), Foxx is very good, subtle and tough at the start and then blossoming into a badass. But the showiest performance comes from DiCaprio, who bites into the role of Candie with flamboyant, dastardly gusto. He makes such a juicy Big Bad that he should play bad more often. Looking like a livid, laser-eyed Uncle Ben, Samuel L. Jackson is also sly, ornery fun as Candie's oppressively racist servant Stephan. Last but not least, Don Johnson enjoys himself as Tennessee white supremacist Big Daddy, and Walton Goggins is memorably despicable as one of Candie's puppets. There's also a cameo by Jonah Hill as a Ku Klux Klan baghead that surprisingly doesn't take one out of the story.

For the first half, the film could be classified somewhat as a buddy movie, only with more slave-whipping and dead bodies. Whether or not one can stomach the mix of violence and black humor in most of Tarantino's films will ultimately be answered in an over-the-top slaughter set-piece at the "Candyland" mansion. The results look as if tomatoes were lobbed at every wall. When Tarantino isn't having a little fun, he's being provocative and showing slavery as the hideous atrocity it is, refusing to be treated with kid gloves. In its third act, which includes a self-serving cameo by the filmmaker himself doing his best Aussie accent, "Django Unchained" loosens the chains a bit too much when it should be getting to its showdown, which is as explosive and satisfying as one could have hoped. At 2 hours and 45 minutes, the film could feel overlong (it was reportedly whittled down from a 192-minute cut), but who really wants a tighter Tarantino movie? We're as enamored with his brilliant sense of pop-art style and storytelling know-how as he is.

Even if his latest isn't quite in the same ballpark as his last ("Inglourious Basterds") or any of his previous audacious masterworks ("Reservoir Dogs," "Pulp Fiction," "Jackie Brown," "Kill Bill: Volumes 1 & 2," and the "Death Proof" segment in "Grindhouse"), it's still unbridled, quintessential Tarantino, and that's pretty great for any movie lover's money.