"Lords of Salem" a Rob Zombie movie that doesn't throttle you 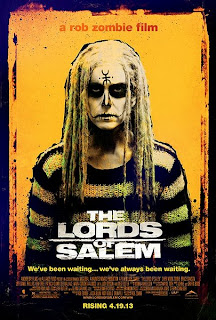 Most pieces of art are inherently self-indulgent anyway, but three out of four of writer-director Rob Zombie's films have been freakishly aggressive, excessively ugly assaults on the senses. The jury is still out on whether or not the shock rocker-turned-shock filmmaker is actually going places as a horror-genre auteur. He's normally more of an assailant than a director, wallowing in grubby, obnoxious white-trash freak shows. But, as relentlessly violent and twisted as Sir Zombie's work is, his films do boast some sort of fascinating allure that's hard to articulate. If "House of 1000 Corpses" was his "The Texas Chain Saw Massacre" and "Halloween" was his, um, "Halloween," the Massachusetts-born Zombie's latest, "The Lords of Salem," is his "Rosemary's Baby" and "The Sentinel" with echoes of Dario Argento. Though "The Lords of Salem" isn't what one could call a good film, it's certainly an interesting, often hypnotically weird, and more disciplined piece of work without throttling us.

Appearing in all her prince of darkness' movies, a tattooed, dreadlocked Sheri Moon Zombie plays Heidi Hawthorne, a recovering crack-addict who co-hosts a late-night radio show in Salem with two Hermans (Jeff Daniel Phillips, Ken Foree), forming the "Big H Radio Team." She has a cool, spacious apartment in a rather empty building with a friendly landlady, Lacy (Judy Geeson), but there might be a new tenant down the hall in Apartment 5, even if Lacy hasn't rented it out. Then, at the station, Heidi squarely receives a vinyl record in a wooden box from a mysterious band called The Lords. They play it on the air, unleashing something that of a satanic incantation that gives Heidi headaches. As Heidi begins hallucinating in and out of her apartment, might Lacy and her two visiting sisters, "self-help guru" Sonny (Dee Wallace) and palm reader Megan (Patricia Quinn), have something to do with the former addict's unraveling? Can Salem history writer Francis Matthias (Bruce Davison) help stop the rebirth of the once-crucified witches?

A departure from Zombie's frenzied, phantasmagoric style and gritty grindhouse aesthetics, "The Lords of Salem" evokes an atmospheric, dreamlike vibe that of European horror cinema from the '60s and '70s. Portentous and nightmarish, his fifth feature has just the right amount of grunge and incendiary imagery to be the kind of aural-visual experience Zombie insists on always making. The lensing by cinematographer Brandon Trost is placid and assured, and the soundscapes, composed by Zombie's guitarist John 5 and mixer/composer Griffin Boice, enhance the dauntingly creepy, oft-hallucinatory ambience. (The Lords' theme is the ultimate harbinger of doom.) Zombie also adds funky little touches, calling out his film-history knowledge with a blow-up photo of the iconic man in the moon from Georges Méliès' "A Trip to the Moon" hanging above Heidi's bed, and per usual, a black-and-white classic movie playing on every TV set.

Plot is secondary here, and it could be a metaphor for a drug relapse, but it's just a trip into hell, literally. Not counting an uncomfortable orgiastic topper with a coven of cackling crones worshipping Satan and baring their bodies, the film doesn't always feel like a full-bore Zombie joint until the hellish finale toward Heidi's fate. With that said, there are still a handful of nerve-shredding moments, a few jump scares involving naked specters, and a gonzo, aurally operatic bit involving an entranced Heidi, her face painted a skeletal white, a demonic dwarf, and umbilical cords that only a maestro of the nihilistic, such as Mr. Zombie himself, could execute. Or, take the scene where Heidi finds herself in a church with a priest, who bleeds at the mouth as she pleasures him.

Heidi isn't the most compelling protagonist, yielding to enter a fugue state. However, given her work ranging from grating to amateurish to cheerfully insane in her husband's previous films, this might be Sheri Moon Zombie's most appealing performance. Since Zombie tends to cast obscure cult stars in his films, he actually gives four women some of their juiciest roles in years. Making a delightfully kooky trio, '70s-'80s horror veteran Geeson, genre favorite Wallace, and Quinn (who once helped kick off the Time Warp as Magenta in "The Rocky Horror Picture Show") can flip between smiley tea-time and sinister doings. Also worth mentioning, the steely-eyed, 64-year-old Meg Foster owns the role (and cackle) of evil incarnate Margaret Morgan without an iota of inhibition. Only Maria Conchita Alonso gets the short end, mostly there to paint, cook, bathe, and smoke, as Francis' supportive wife.

This marks an appreciable distinction from Zombie's previous work. While he has settled down a bit with his overdone stylistic flourishes and direction this time out (his characters aren't just caricatures frothing at the mouth and spewing F-bombs), one still wishes "The Lords of Salem" had made more use of the Salem milieu, which seems like unrealized potential since it was actually shot on-location. Fans of Zombie's singular vision: this will be right up your alley. All others need not apply.