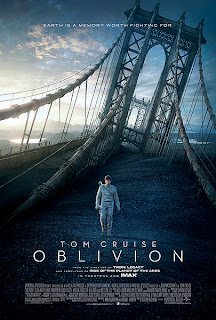 In a world where original and substantive science fiction is hard to come by sometimes, "Oblivion" isn't very original or substantive either. But it tries, and that's better than not trying at all. Elegantly designed and ambitiously cerebral, this Kubrickian space opera is predicted to be more thought-provoking than any of your big, soulless tentpoles and star vehicles of the summer season. On the terms of aesthetics and ambition, this summer's upcoming blockbusters have their work cut out for them. Director Joseph Kosinski (2010's emotionally empty but coolly enjoyable "TRON: Legacy"), adapting his and Arvid Nelson's unpublished graphic novel with screenwriters Karl Gajdusek and Michael Arndt, improves on emotional involvement from his last feature. And yet, the screenplay still feels simultaneously underwritten and overwritten when some narrative twists are sprung on us.

The year is 2077, sixty years after an alien invasion by the Scavengers (simply known as "Scavs") left the moon and much of Earth destroyed. The surviving population has been shipped to one of Saturn's moons, Titan. Still living on Earth but having had their memories wiped to secure their mission, drone technician Jack Harper (Tom Cruise) and his partner Victoria (Andrea Riseborough) are an effective mop-up crew living in a sterile, glass-paneled enclosure. They repair and maintain the drones which protect the planet's remaining resources from the Scavs. Under the watchful eye of the chirpy Tet commander Sally (Melissa Leo, with a twangy accent) on a monitor, Jack and Vica are only two weeks away from joining the rest of the survivors on Titan. While he has gotten romantically close to Vica, Jack can't seem to erase the memories he shared with someone on the observation deck of the Empire State Building. Then, over the course of his day-to-day sweeps in his bubble jet, a pod crash-lands on the Earth's surface with all of the crew members in cryo-sleep. One of them, Julia (Olga Kurylenko), just might be the same woman he's been dreaming about.

On the technical front—art direction, production design, visual effects—"Oblivion" is top-of-the-line. The post-apocalyptic landscape is sleek, beautifully detailed and fully realized from Jack and Victoria's sky tower, a shiny, modern penthouse complete with a swimming pool and a spiral staircase, to the wasteland of a football stadium. Before the plot gets underway, we're eased into this world by the film's deliberate, expertly crafted and methodically paced first half, tracking Jack's daily routine, similar to "I Am Legend," and his escape to a peaceful cabin in the woods full of collectibles and mementos à la "WALL-E." Capturing a grandiose canvas, Claudio Miranda's ("Life of Pi") cinematography is just breathtaking and the few action scenes that are there are cleanly shot without being reduced to point-and-shoot Epilepsy. The pulsing music score by French electronic band M83 is suitably futuristic, even if it is familiar of Daft Punk's contribution to "TRON: Legacy" mixed with Hans Zimmer's fog horns.

Now, if "Oblivion" liberally borrows themes of man vs. machines, identity, and loss and visual cues from other movies, at least it borrows from the best ("2001: A Space Odyssey," "Total Recall," "Moon," "The Matrix," and even the Cruise-starring "Vanilla Sky"). The film isn't flawed for being derivative, because after all anything can work as long as it's executed well, but for making its characters play second fiddle to its ideas and plot machinery. Curiously, after a key revelation is revealed (which is seen coming a mile away), the film starts to spin its wheels and grows less interesting as its narrative unspools. Points are due, though, to Kosinski and his writers for coming up with one head-scratching surprise in the middle that makes for a hopeful payoff in the end.

Following in step with sci-fi box-office juggernauts "Minority Report" and "War of the Worlds," Cruise, again, proves why he's such a bankable movie star (and has a face that never ages, despite being 50 years old). Though the character of Jack intentionally begins as a blank slate (though he likes baseball and talks to an Elvis bobblehead doll), he still manages to carry the whole film with charisma, empathy, and pathos. While Jack is someone to root for, his relationship with Julia is supposed to be the film's heart but feels dramatically inert. Kurylenko, who's not only physically beautiful but has a grace about her on screen, looks robotic and feels misused here. Destined for greatness with her captivating presence, Riseborough is the more interesting of the two leading ladies. As Victoria, she equally conveys a cool professionalism and vulnerability through a simple glance. Morgan Freeman also appears, having some fun chomping on a cigar, but he's underused and his character doesn't put much of a dent in the proceedings anyway besides dishing out exposition dumps.

Staggering visual work in a film can too often be taken for granted—and to think that last year's "Prometheus" didn't even win its single nomination for Visual Effects—but this is one of the few films actually made to be seen on a rumbly IMAX screen. It's a breath of fresh, celestial air to see a sci-fi film about the human condition instead of explosions, but "Oblivion" still can't quite stir the heart even when it makes a sincere attempt. Nothing ever quite matches the colossal scope, splendid visuals, Tom Cruise, and Andrea Riseborough.