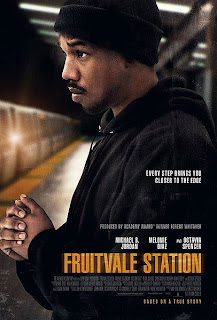 "Fruitvale Station," the incendiary feature debut of writer-director Ryan Coogler, is made with such burning passion that it pays due respect to the real-life central character, Oscar Grant III, and illuminates how real and timely injustice is in this society. At 2:15 a.m. on January 1, 2009 in Oakland, Calif., an unarmed 22-year-old black man was handcuffed on the metro platform of Fruitvale BART Station after ringing in the new year and then shot by a police officer. Oscar later died, leaving behind a life he was just starting and beginning to turn around for the better.

Even as it's building to an upsetting, heartbreaking predestined conclusion and felt in the base of one's stomach—the film opens with actual cell phone footage of Oscar being shot—"Fruitvale Station" turns back time, unfolding as a day-in-the-life snapshot of Oscar's life on New Year's Eve, his last full day on earth. A year before, Oscar Grant (Michael B. Jordan) did time for drug dealing, receiving tough love from his concerned mother, Wanda (Octavia Spencer), who was fed up visiting her son and having to tell his four-year-old daughter, Tatiana (Ariana Neal), why Daddy was always on "vacation." On December 31, 2008, his "day off," Oscar takes Tatiana to preschool and drops off his girlfriend, Sophina (Melonie Diaz), at work. He goes to the grocery store, picking up some crabs for his mother's birthday dinner, giving fish-fry advice to a stranger (Ahna O'Reilly), but also trying to get his job back after showing up late so many times. Making it his resolution to quit "selling trees," he's tempted to sell a bag of weed but dumps it out. After Wanda's birthday dinner, Oscar, Sophina, and friends take the train—as suggested by Wanda—to San Francisco for the New Year countdown and to celebrate with fireworks. Alas, on their way back home, a scuffle breaks out on the train with a former inmate and the unarmed Oscar, along with three of his friends, is detained by the transit police before one of the cops mistakes his gun for a taser.

Grittily and realistically photographed by Rachel Morrison with a fly-on-the-wall docudrama approach, "Fruitvale Station" is vivid and compelling alone as a slice-of-life leading up to the fateful moment. Oscar spends his day running mundane errands and making moral decisions to shape a more honest life for himself. Writer-director Coogler should be commended for not deifying Oscar as a martyr or whitewashing any of his human flaws. He's not a saint—Sophina has been lied to about Oscar fooling around behind her back and being fired from his job—but he's doing the best he can. With Coogler dramatizing a seemingly ordinary day, a few moments of narrative foreshadowing don't ring as true as others but act more as needless punctuation marks than major flaws that would blunt or detract from the film's cumulative aftereffect. While pumping gas, Oscar tends to an injured stray dog. Before getting on the train home after the fireworks, he chitchats with a man who once had nothing and earned a dishonest living to get where he is but is now successful with a baby on the way. Oscar's last moment with Tatiana would have been enough, as he promises to play Candy Land in the morning and take her to Chuck E. Cheese's. The climactic Fruitvale Station-set maelstrom is intensely emotional and the final shot, where Sophina doesn't even know how to answer little Tatiana's question, is simply poignant.

Deserving of accolades and star status, Jordan disappears so convincingly into the role of Oscar. With street swagger, a simmering temper, devotion to his friends and family, and love for his girlfriend and daughter, Oscar is fairly humanized as a real, complex, sympathetic, and three-dimensional person. Jordan creates a likable, compassionate, and gregarious young man, warts and all, and makes his relationship with Tatiana (due in no small part to a genuine Ariana Neal) sweet, moving, and completely lived-in. The film would work alone with Jordan's top-tier work, but the actresses playing the two adult women in his life are strong as well. Spencer is nothing short of dynamite, her final scene especially shattering, and Diaz does some of her rawest work as Sophina, who has fire in her but deeply puts her trust in Oscar. There isn't a false emotion in the performances.

"Fruitvale Station," which has already won both the Grand Jury Prize and the Audience Award at this year's Sundance Film Festival, not only serves as a blood-boiling conversation starter but a vital, unforgettable picture of our time and an authentic, empathetic, fair-minded account of the fragility of life. Without falling back on manipulative melodrama or turning the story into an angry political screed, Coogler delivers a riveting, hard-hitting gut-punch, its powerful impact staying with you like most tragedies do. The fact that Oscar was not a fictionalized character adds extra resonance, and now that the film's release has come around the month of George Zimmerman's trial verdict for killing the unarmed Trayvon Martin, "Fruitvale Station" stings even closer to home.