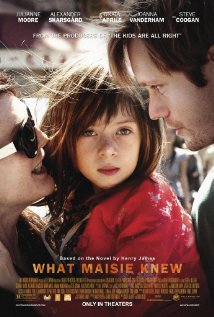 Adorable 7-year-old Onata Aprile naturally expresses so much emotion with her innocent, ethereal eyes as Maisie, the neglected young daughter who's always in earshot of her parents' shouting matches. Her mother, Susanna (Julianne Moore, sporting dark eye shadow, black nail polish, and forearm tattoos), is a rock star always waiting for the next tour bus. Her father, Beale (Steve Coogan), is a pompous art dealer, having an affair with the twentysomething nanny, Margo (Joanna Vanderham), right under Susanna and Maisie's noses. When Susanna and Beale finally split, Maisie goes to stay with Daddy for a weekend, confused to why Margo is living there, too, but still glad to have Margo around. Thereafter, Susanna gets hitched to a young, good-looking bartender, Lincoln (Alexander Skarsgård). The other man develops a bond with little Maisie, which only makes Susanna resent him. In the end, Margo and Lincoln look after the little girl more often than her real parents.

There's a good chance the maternal character in Henry James' 1897 novel wasn't a glammed-up rock diva, but by being contemporized 116 years later and transplanted to present-day Manhattan, "What Maisie Knew" feels even more relevant and stingingly perceptive. A child's eye view of divorce could make for standard-issue melodrama ready for the Lifetime network and a depressing proposition, however, directing partners Scott McGehee and David Siegel (2001's "The Deep End" and 2009's "Uncertainty"), working from a screenplay by Nancy Doyne and Carroll Cartwright, get well-pitched performances across the board and are unflinching enough in their story treatment. 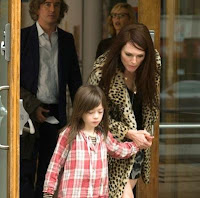 Evocatively shot by cinematographer Giles Nuttgens, "What Maisie Knew" is told almost entirely from the sensitive vantage point of Maisie, and that's what makes it so unforgettably worthwhile. Despite the title, Maisie clearly doesn't understand every facet of her parents' situation and where she belongs, making it all the more troubling and impactful. Not since Quvenzhané Wallis in 2012's "Beasts of the Southern Wild" has a child newcomer been so remarkably impressive and captivating on screen. Aprile is startlingly talented, standing out among her heavy-hitting elders. Susanna and Beale aren't monsters without a point-of-view; they show their daughter affection and yet, they are negligent, self-involved, and unfit to be parents, to say the least. The mother finally comes to the self-realization that she has put her career first and only visits Maisie when it's convenient for her, while the father isn't much more irresponsible. Moore and Coogan hit all the right, unsparing notes, and Skarsgård makes every scene with his little co-star one to cherish. Scottish TV actress Vanderham, as Margo who finds herself in a tough position time and time again, has a fresh face that one wouldn't mind seeing more of in features.

When it could have been manipulative and mawkish, "What Maisie Knew" comes out emotionally affecting and hard-hitting. While optimistic and a bit pat in the end, it's thankfully never a sunny kids' version of divorce full of Hollywood-movie artifice and schmaltz but powerful in its delicacy. That's not to say it's not a difficult film to watch—it's too bad Maisie, or any child, would have to experience neglect—but there is something about the final shot that packs a stirring, hopeful punch. Little Maisie deserves a happy life, no matter who remains as her guardian.