Have You Checked the Children?: Thoughtful, unflinching "Prisoners" puts you through the wringer 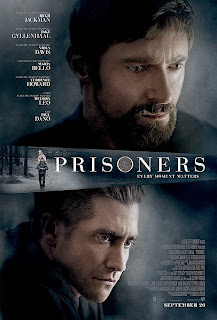 How far is too far? Are you willing to cross moral lines and set aside rational thought to get your missing child back? Do the ends justify the means? A harrowing, unflinching, and unremittingly dark gut-punch, "Prisoners" explores such tough, uncomfortable questions, unafraid to get its hands dirty and wade in the darkness. It's actually three films rolled into one: a dramatic morality play, an engrossing police procedural, and a complex, page-turning mystery-thriller. The two films are arguably more effective than the last, but this is still a haunting, meticulously crafted piece of filmmaking.

It's a wet Thanksgiving Day in suburban Pennsylvania. Keller Dover (Hugh Jackman), wife Grace (Maria Bello), and their two children, teenage son Ralph (Dylan Minnette) and 8-year-old Anna (Erin Gerasimovich), walk down the street for their feast at the Birch family's home. Franklin (Terrence Howard) and Nancy Birch (Viola Davis) also have two children around the same age, daughters Eliza (Zoe Soul) and young Joy (Kyla Drew Simmons). When the girls first go out to play, they're being watched by their older siblings and start playing on a parked RV. Later in the day, Anna and Joy go missing. As the only evidence points to that mysterious RV, lonely Detective Loki (Jake Gyllenhaal) tracks down the close-mouthed driver, Alex Jones (Paul Dano), who has an IQ that of a 10-year-old and lives with his Aunt Holly (Melissa Leo). But when nothing concrete turns up in the RV search, Alex is released and immediately attacked by the distraught Keller, who hears Alex whisper something about his daughter. With that being enough evidence that Alex had something to do with Anna's disappearance, he abducts the mentally handicapped boy, holding him prisoner and beating him to a bloody pulp in hopes that he'll confess. Loki has solved every case he's ever been assigned, so Alex is just a red herring, right?

Marking the Hollywood debut of French-Canadian director Denis Villeneuve after his 2010 film "Incendies" (the Academy Award winner for Best Foreign Language Film), "Prisoners" runs close to two and a half hours, but what a two-and-a-half-hour gripper it is. Villeneuve admirably lets the film simmer slowly, his directorial choices so effectively simple and quiet without the obtrusion of a thunderous, manipulative musical score, and as skilled as anything by David Fincher (one will be reminded of Fincher's own "Zodiac"). He sprinkles in religious iconography, with crucifixes hung from car rearview mirrors and characters reciting The Lord's Prayer, but nothing is addressed with a pretentious bludgeon to the head. Though released into the mainstream by Warner Bros. as a kidnap-revenge exploitation pic, "Prisoners" bravely pulls no punches in its depiction of upsetting, grimly disturbing subject matter. While it could have been a melodramatic revenge exploitation pic with nothing to chew on, Aaron Guzikowski's script is a lot more thoughtful than that as a morality play about raw, primitive human nature, the human condition, and vigilante justice refracted through a crime potboiler prism. Photographed with an arrestingly bleak mood by the reliable Roger Deakins, the film lulls the viewer into its chilly, rainy Pennsylvania milieu (subbed by Georgia). Even before the families are left broken, a pall of dread hangs over the very opening shot of a deer about to become dinner. Right before the girls go missing, the camera pushing into a tree outside the Birches' home is a subtle, foreboding touch. A scene in which Loki spots a strange man (David Dastmalchian) creeping at a nighttime candlelight vigil and chases him through the backyards of the neighborhood is eerie and suspenseful.

This is truly an actors' film in which everyone in the cast is great up and down the line because every character feels like a real, living person. By the sweat of his brow, Jackman acts the hell out of this, turning in his richest, most intense work as Keller. The character is established as a man who's a survivalist and prepared for anything, judging by his stocked, apocalypse-ready basement. Sure, Jackman has some showy moments of pain and fury that would be bait for an Oscar reel, but his emotions are never too histrionic, just perfectly pitched and controlled for the screen material that calls for his character to do anything to find his daughter (waterboarding the suspect wouldn't be out of the question). On the same level, Gyllenhaal is quietly compelling, his performance consisting of twitchy blinking and a simmering under the surface; he doesn't need an expository backstory to get Detective Loki's focus and frustration across. Given less screen time but enough meat to work with, Bello is truly heartbreaking as Grace, who copes with her loss in despair by self-medicating and sleeping the day away; Davis doesn't fail to bring a palpable gravitas to Nancy, especially upon facing her daughter's possible captor; and Howard believably takes the moral high road as Franklin, even though he's complicit in his friend torturing Alex, and wants his own daughter back as much as Keller. Last but definitely not least, Dano is so scarily good as Alex that he could become typecast as a child-like creep every time, and Leo proves once again that she can do anything, losing herself in each character she vividly creates, even as she's made up to look older and unglamorous.

Executing a potent emotional catharsis, Villeneuve seems to be in full control of the film he wanted to make, and then the final 15 minutes come and it takes a more conventional Hollywood Thriller approach with its turn of the screw and the mystery kidnapper having time to discuss his or her motives with a gun raised. Piecing together puzzle pieces of the mystery, which is strewn with snakes, mazes, a necklace, and an alcoholic priest with a secret in his basement, is less satisfying than what has come before, but within this story's context, none of it feels too preposterous or arbitrary, most of it is carefully thought-out, and the holes are few in hindsight. And, for viewers who like finite conclusions that spell out everything in their stories, this one might infuriate some but will add more to the conversation for those who favor ambiguity and irony. More unsettling than most horror films and grueling where it has to be, "Prisoners" asks a lot from the audience, not only to stomach it but to crack the case and ruminate its themes. With its powerhouse roster of class-act thespians all being at the top of their game here, the film is worthy of attention come awards season. Even so, it's a motion picture that may not be a happy time at the multiplex, but it needs to be seen. Also, if you have children, you will never let them out of your sight.