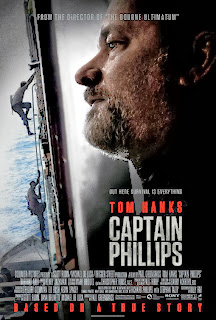 En route to Mombasa, Kenya, in April of 2009, Captain Richard Phillips and his crew aboard a cargo freighter, the Maersk Alabama, were approached by four armed Somali pirates in skiffs. The former fishermen eventually made their way on board, hijacking the ship and looking for money. While a few others were held at gun point and the rest of the crew hid in the engine room, Phillips tried distracting the pirates. The merchant mariner later made it out alive with a little help from the Navy, but it wasn't all calm waters. The captain's fate is hardly a spoiler or equal to reading the last few pages of a novel because (1) the film is based on a true story, where the outcome should be public knowledge, and (2) the real Captain Phillips wrote the book, "A Captain's Duty: Somali Pirates, Navy SEALS, and Dangerous Days at Sea," co-written with Stephan Talty, that provided the basis for the film. Proof that the suspense isn't in how the story ends but how it gets there, the non-fiction thriller "Captain Phillips" knows how to hold you hostage.

Director Paul Greengrass, most notable for 2006's devastatingly cathartic "United 93" and the second and third "Bourne" movies, succeeds in telling a fact-based story, not unlike "Apollo 13," the aforesaid 9/11 docudrama, and last year's Best Picture "Argo," whose preordained conclusions barely mattered as long as there was tension. The filmmaker is also known (or, some might say, infamous) for his kinetic, hand-held style of shooting and penchant for ultra-tight close-ups, but, courtesy of Barry Ackroyd's crisply visceral photography, it comes in handy here, serving the sea-set docudrama and generating jittery, you-are-there urgency. For once, the unsteady camera never distracts or overpowers the inherent drama. And when those skiffs are first sighted, Greengrass tightens the screws so skillfully that you almost believe the pirates won't make it to the ship, until they do. For a long time, the tension grows steadily, coming to a boil, and then, once the action moves to a lifeboat, it ebbs and flows before building up again to its rousing climax.

When the film opens with Richard Phillips (Tom Hanks) driving to the airport with his nurse wife, Andrea (Catherine Keener), it's not only an economical setup for what he's temporarily leaving in Vermont but setup for Foreshadowing and Geopolitical Commentary in husband and wife's "big wheel's a-turnin'" conversation. The actors are such pros that they underplay it, but the way the scene is written feels a bit transparent and less than authentic. Through no fault of her own, significant actress Keener is slighted with maybe five minutes of screen time, as she hugs her husband goodbye and the film never returns to her again. Also, the Alabama crew members, though well played by a few recognizable faces (including Chris Mulkey and Corey Johnson), are mostly interchangeable. Better is Barkhad Abdi, a real-life Somalian native who was driving limos before being cast as emaciated lead pirate Muse/Skinny. He's not a professional actor and not for a second does he feel like he's acting, which is very much a good thing. Rounding out the other three are Faysal Ahmed, Barkhad Abdirahman, and Mahat M. Ali, but Abdi is so chillingly intimidating and yet vulnerable in his debut and gets the most shadings of humanity. Screenwriter Billy Ray (2012's "The Hunger Games") is generally unbiased in his point-of-view of the Somali pirates, not dehumanizing them all as evil, bug-eyed monsters but as troubled human beings who get brutal when they're desperate.

Naturally, Hanks anchors the film. A movie star with intelligence instead of muscle, he is the ultimate everyman. As depicted in the film, Phillips is kind of a ordinary, all-business blank and he's not really his crew's idea of a hero, but one still believes he'd go down with his ship. Hanks finds so much relatability, resourcefulness, and overall subtlety in the role, especially when trying to earn the fearsome pirates' trust while also hoping to outsmart them. Before the pirates attack, he does a safety-precaution inspection and drill, and lets the rest of the crew know when their coffee break is over. Right after the first skiff sighting, he also takes the time to send a brief e-mail to his wife, a quietly touching moment that packs on an extra sense of portent. It seems to be a steadfast, if all-business, piece of acting from Hanks, and then the powerful final scene hits. After a shell-shocked, emotionally spent Phillips remained a hostage for four days in a cramped lifeboat with his life on the line and little to no water to drink, every emotion floods out of him and we feel it all in that shattering, cathartic moment. As Hanks' portrayal of the real-life man comes full circle, it might be the actor's most vivid and affectingly raw work since 2000's "Cast Away."

Resolutely credible, intensely rattling and often exhaustingly tense, "Captain Phillips" mostly resists Hollywood embellishment and "America, Fuck Yeah!" jingoism for the sake of straightforward storytelling and suspense. It is simplicity with a little human meat on its bones and a finely drawn subtext of globalization, contrasting the seamen's Western world with the desperation of the Third World. If the film doesn't always feel as taut as it could have been, Hanks always brings the ship back on course and makes it a more cathartic experience.