DVD/Blu-ray: "All Is Bright" admirably cheerless but too blah to satisfy 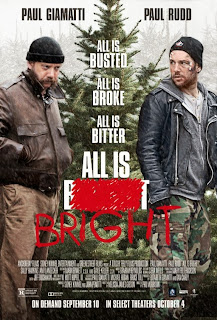 Dark, caustic Yuletide comedies are not a dime a dozen, 1994's "The Ref" and 2003's "Bad Santa" remaining the earmarked polar opposites of most trumped-up, ultra-sentimental Christmas movies. Grey and cheerless, "All Is Bright" admirably doesn't seem to have much joy or any Christmas miracles on its wish list at first, but alternately affecting and acerbic moments, as well as reliable performances all around, only keep it from being an outright misfire. Eight years after director Phil Morrison's wonderfully special indie "Junebug" (which made Amy Adams a star), it's still a regrettably dull follow-up.

Paul Giamatti adds another notch to his belt playing a crooked sad-sack, this time as morose robber Dennis. After serving four years in prison, he is now out on parole and wants to go straight. He returns home to Quebec, horrified to find that his wife, Therese (Amy Landecker, doing an authentic French-Canadian accent), has told their daughter he's been dead for a year from fighting cancer. She's also taken up a relationship with René (Paul Rudd), Dennis' fellow ex-con pal who has gone straight but is barely getting by financially. So, without a shower, a home, a job, a wife, and a daughter, Dennis is definitely down on his luck. Bitterly reuniting with René at their old drinking haunt, he learns no steady jobs are available and decides to join him in selling Christmas trees in New York City. As their operation seems to be a bust, Dennis can't seem to kick his knack for thieving and wrestles with the hard facts of life, as he can't see his child and his wife wants nothing to do with him and plans to marry René after his wife signs the divorce papers. It's going to be a crummy Christmas and a crummy life.

Regardless of the jazzily arranged Christmastime standards that would play in an elevator and Dennis' daughter opening her Advent calendar for each day, there's a distinct pessimism and palpable winter chill in the air throughout the ironically titled "All Is Bright" (it screened under the title "Almost Christmas" at the Tribeca Film Festival). Everyone has a hardscrabble life, everyone smokes, and everyone might as well suffer from seasonal affective disorder. The screenplay by Melissa James Gibson (TV's "The Americans") takes an unconventional, miserablist approach by refusing to rehabilitate any of her characters, especially Dennis, but the story is thin and rudderless, and the existing humor is cynically amusing on occasion without being particularly funny. A loose, lackadaisical tempo and a mopish, minor-key tone (which could be interpreted as slow and depressing) take time getting used to before one final sweet gesture by Dennis. It's a motivated moment of redemption that resonates and doesn't hurt being cued to English pop singer Tracey Thorn's beautifully mournful "Joy," but, at the same time, just barely makes the oppressive bleakness that preceded it worthwhile.

Giamatti can make any unlucky, melancholy, high-tempered character engaging and sympathetic, and that includes Dennis. Compounded by his pain and struggle, he has relapses of his pre-prison life as a dirty crook, but he's also doing the best he can, making amends for life's mistakes. Rudd is back to playing another one of his dimly optimistic losers, now with more scruff, an earring, and stained teeth. René is even less likable, not only taking his best buddy's wife but caught by Dennis chatting up another woman, but it's amusing to hear the actor put on a phony Québécois accent when selling trees to New Yorkers. Despite a cartoonishly thick but kind of charming accent, Sally Hawkins casts a more memorable impression as Olga, a colorfully ornery Russian maid who's housesitting for a dentist's elegant brownstone. She walks by Dennis and René's tree lot when only Dennis is on duty and gives him $200 for a tree, plus tip, if he delivers it and sets it up. Olga then gives Dennis food, clean clothes, and a shower to clean himself up. On the face of it, the character of a Russian maid named Olga seems like a cliché, but Hawkins puts on an originally quirky, kind-hearted spin that makes it all the more unfortunate when she's left stranded by the script as if the filmmakers didn't know what to do with her. Why didn't screenwriter Gibson make the whole movie about her and Dennis' relationship instead?

"All Is Bright" counts as a film you want to like instead of one you actually end up liking. It's possible for a film to work when it's going against the grain—more of them should—but for too long, this one just twiddles its thumbs, waiting for Christmas morning to come. Decidedly too astringent and unsatisfying to become a perennial holiday offering or a perennial anything, but amidst the working-class despair, it actually gets right the spirit of the holidays, which is where most big-studio pictures ring false.