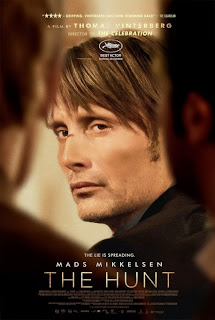 Danish writer-director Thomas Vinterberg (1998's "The Celebration") and co-writer Tobias Lindholm (this year's "A Hijacking") take the Hitchcockian chestnut, "the wrongfully accused man," and wrap it up in a sympathetic, riveting, and provocative morality drama and cautionary tale. Mads Mikkelsen (who played a memorable Bond villain in "Casino Royale" and is currently seen dishing out ladyfingers on NBC's "Hannibal") breaks out of typecasting in an outstanding, carefully modulated performance here as Lucas, a calm 42-year-old man who has been working as a kindergarten teacher ever since his high school closed. He's well-liked by the children, but right around the time he retains full custody of his teenage son, Marcus (Lasse Fogelstrøm), from his bitter ex-wife and starts seeing one beautiful school helper, Nadja (Alexandra Rapaport), it's brought to his attention by school principal Grethe (Susse Wold) that one of the children has accused Lucas of showing her or him his genitalia.

That child is five-year-old Klara (Annika Wedderkopp), the daughter to Lucas' best friend Theo (Thomas Bo Larsen). When we first meet Klara, she's lost outside of the supermarket and Lucas, along with his pet pooch Fanny, takes her hand and walks her home. Another time, he finds her outside her home, waiting outside as her parents have a screaming match, and walks her to school with Theo's advice. Later at school, Klara crafts a present for Lucas and gives him a kiss, which Lucas soon advises her not to do to someone that isn't family. This confuses and hurts Klara, and remembering a porn video her teenaged brother showed her, she sits forlornly and tells Grethe that she hates Lucas, while describing his male anatomy. Grethe takes slow, careful precaution, bringing in psychologist friend of hers and is determined to protect the children, immediately rejecting the innocent Lucas. The lie circulates and snowballs, turning Lucas, the real victim, into a pariah. Anything he says is useless, as it's his word against the little Klara, who's known to have a vivid imagination. Children never lie, right?

Achingly plausible and maturely handled as a human story without ever taking to the courtroom or being cheapened into a trashy "Scorned Little Girl From Hell" thriller, "The Hunt" takes its title symbolically and literally. The film begins at the start of deer season, and Lucas' favorite dish is venison, but he becomes the victim of a town witch hunt. The mob mentality never feels even slightly overdramatized, as everyone reacts with relatable human emotion. "I believe the children, Lucas, I always have," Grethe stands by her knee-jerk reaction. She even convinces the rest of her students' parents that their kids might be suffering "symptoms" of sexual abuse, like mood changes and nightmares. Theo tries giving his best friend the benefit of the doubt but, naturally, believes his daughter, and after Klara confesses Lucas didn't do anything, Theo's wife believes Klara has just repressed such a psychologically damaging incident. The grocery store manager and workers even do damage control, asking him not to shop there. And yet, Lucas isn't alone. At first, Nadja scoffs at the accusation but then has to ask her new boyfriend if something really did happen. Marcus then shows up at his dad's door before Christmas. Lucas' friend, Marcus' godfather Bruun (Lars Ranthe), and a few other chums are also supporters. When the other children's stories don't match up, Lucas' case is looking good.

Completely in tune with the inner energy of the blameless, tragic Lucas, Mads Mikkelsen is nuanced and quite subtle given his predicament. If he were to defend himself too much, he might come off guilty, but his reactions are more low-key, sometimes so low-key that one almost wishes he wouldn't turn the other cheek and blow his lid earlier than he does. Still, Lucas is never a coward or uncivilized, except when he can't take it anymore. His attendance at a Christmas candlelight church service is especially tense and heartbreaking. Little Annika Wedderkopp, as Klara, plays with her eyes and a nose twitch to access the emotions of regret and the impulsive fabrication of a lie in her mind without ever becoming a monster. Even when she tries to right her life-shattering wrong, it's too late. Thomas Bo Larsen and Lasse Fogelstrøm also make equally strong impressions as Theo and Marcus, who, of course, defend their own blood, the former having a trickier time of only taking one side. Cinematographer Charlotte Bruus Christensen also shoots the film beautifully with a cool, wintry air that goes in tandem with the material to palpably chill the bone.

This would seem to be a troubling, even frustrating, sit, watching a man have his back to the wall and be condemned, but "The Hunt" is such a powerful take on difficult he-said-she-said subject matter and always rings true in its vindication of one man and wavering of human decency. Writer-director Vinterberg and screenwriter Lindholm probe some morally complex questions that make you think how you would handle such a situation on any side. How would you react if a child without a much-developed mind accused you of something that crossed the boundaries? If you were the principal or parent of that child, would you quickly jump to conclusions because it's an innocent child? Though there could have been a smoother transitional scene between where Lucas finds himself and where he's at a year later to make things feel less tidy, the closing shot is chilling. There might be forgiveness, but one's life is forever changed after such a serious, irreversible accusation. Lucas will never forget it and neither will we.