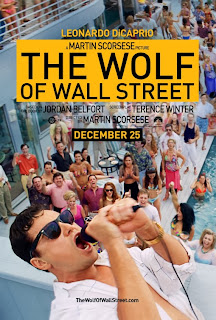 David O. Russell's "American Hustle" has been receiving so much praise as a good Martin Scorsese movie that wasn't directed by Martin Scorsese. Rather, "The Wolf of Wall Street" is the real Scorsese's latest and, while one can see the auteur's rhapsodic, in-your-face sensibilities on display, it fits perfectly into 2013's hedonistic trifecta, including "Spring Breakers," "The Bling Ring" and "Pain & Gain." Like those films, it's another bold indictment of extreme, entitled people with a screw-it attitude living their version of the American Dream. Like those films, this one will probably be misunderstood, too. Unapologetically cynical and savagely funny, this darkly comic cautionary tale chronicles the decidedly unsanitized true story of Wall Street broker Jordan Belfort, a sort of twisted Robin Hood, in all of his fraudulent and debaucherous glory. Director Scorsese and screenwriter Terence Winter take the candid honesty of Belfort's 2007 memoir and unleash a ballsy, brazenly perverse joyride. If one sees the film as excessive and repetitious, that's because it's very meta in its cinematic approach, being in the service of the dichotomy of wealth and greed and the free-wheeling characters' own excess and retrograde lifestyle. Alternately exhilarating and exhausting at a running time just short of three hours, "The Wolf of Wall Street" is an invigoratingly decadent and rollickingly amoral frenzy. Never has a Scorsese film had so much cheek, and not just the literal, objectified kind.

From the word go, the film plummets us into a brokerage firm on Wall Street, a boys' club where agents turn "dwarf tossing" into a competitive office game. The firm is introduced as a frat house, although the women aren't much better, one equally macho female selling her soul for a job and a female sales assistant agreeing to shave her head for $10,000. They're all drunk with power, success and money. Played by a most fearless Leonardo DiCaprio (who narrates and speechifies throughout), Jordan Belfort starts off humbly as a 22-year-old mentee with big potential in 1987 before becoming a self-made megalomaniac. His first day on Wall Street gave him the high to earn millions, until the stock market soon crashed. But Black Monday didn't stop Jordan. He sought out a low-rent firm in Long Island and ended up showing the little guys the ropes when it came to fast dialing and bullshitting for penny stocks. An unsavory Forbes article made for good publicity, allowing Jordan to start his own boiler room, Stratton Oakmont, in a garage and bring on more brokers who would become Jordan's money-hungry cronies, including partner-in-crime Donnie Azoff (Jonah Hill). Securing an income for his life in the Big Apple with wife Teresa (Cristin Miloti), he spots the va-va-voomy Naomi Lapaglia (Margot Robbie) at one of his mansion parties and makes her his second wife. Though the key to his success is cocaine and he can't get through the day without his diet of Quaaludes, his real drug addiction is money, which he uses to snort, of course. Jordan thinks he's the salt of the earth and has no qualms about deceit, just as long as the morally bankrupt scumbag is making a quick buck.

With no holds barred, "The Wolf of Wall Street" was edited down from an NC-17 rating and a much longer cut, although it's hard to tell what was left on the cutting-room floor. Frankly, thin-skinned viewers who decide not to go on the ride because the film features so many unlikable, unfiltered characters will be missing the point. To get to the blistering condemnation of Jordan and his conscience-free disciples, Scorsese wallows in the exuberantly hollow orgy of money, hookers, booze, blow and greed without condoning it. This is the filmmaker's way of offering scathing ridicule for the Wall Street suits and he doesn't look back. However, if anyone finds the bacchanalia of excessive, destructive behavior glamorous, like Jordan blowing cocaine into a hooker's behind, or sees Jordan as a flawless role model, the film hasn't done its job. It's a picture about appalling people doing appalling things and finding themselves in a soulless hell of their own making, so it lives or dies on satisfying one vital question: Do we care? It should be nigh impossible to give a damn about the heartlessly arrogant Jordan Belfort succeeding or not, but it's hard to keep your eyes off of DiCaprio as Jordan and the debauchery that follows him. You want to see if the shark can actually get away with his unconscionable schemes. Making the most of his movie-star showmanship, DiCaprio is on fire as the incorrigibly brash wolf, giving one of his most ferocious and intensely magnetic performances (his fifth time in the Scorsese ring). While playing a character with very few redeeming qualities, he's at his funniest and loosest, breaking the fourth wall and tapping into his unprecedented comic abilities. One bravura, riotously physical sequence involves Jordan's delayed 'lude high on Lemmons, losing all motor skills and trying with all his might to just get into his Ferrari to drive a mile back home. Ending with a surprise not even Jordan can foresee, this inspired sequence alone should go down in drug-trip film history as a tip of the hat to Jerry Lewis.

Scorsese is careful not to let his male muse chew up the supporting cast with the scenery. Hill, with super-white capped teeth and horn-rimmed glasses, gets to act up a storm as Jordan's cousin-marrying right-hand man and proves effective playing sleazier individuals. Playing Jordan's duchess Naomi, 23-year-old Aussie newcomer Margot Robbie is more than just a gorgeous specimen. She's a true find, never missing a beat as she adopts an unwavering New York accent and keeps up with DiCaprio as the only real moral center and the one woman who can put Jordan in his place once the honeymoon is over. Equally as memorable with bite-sized screen time as his two lead performances this year, Matthew McConaughey is full of oily charisma as senior broker Mark Hanna who teaches Jordan the tricks of the trade from his own chest-beating "Fugazi" philosophy of worrying about making money and not the clients. Rob Reiner is also hilarious as Jordan's accountant dad Max, who becomes indignant when the house phone interrupts during TV's "The Equalizer." Kyle Chandler smartly plays Agent Patrick Denham and has a great scene aboard Jordan's yacht, where they share a passive-aggressive conversation after Jordan tries to slyly bribe the federal officer. It doesn't go as planned when Denham says, "Most of the Wall Street jackasses I bust are douchebags, just like their fathers before them. But you... you, Jordan, got this way all on your own."

Redemption has been a motif in Scorsese's films, but other than remaining protective of those who keep the cash flowing, Jordan Belfort has no real redemption, nor is he really punished with a comeuppance. Even if he finally comes to realize his downfall, the scope of his manipulation and that the damage has already been done, the crook is let off the hook after three years of jail time. Where Jordan finds himself in the end, back in front and leading those who desperately want to learn, is the satirical but unbelievably true punchline. Vibrant and depraved at the same time, "The Wolf of Wall Street" is electrifying to watch as audacious, unbridled filmmaking. It's a pleasure to say that at 71 years of age, Scorsese doesn't seem to be slowing down. If anything, he's more energized and the material seriously calls for it. As if Scorsese and trusty editor Thelma Schoonmaker ("Hugo") thought it was "179 minutes or bust," the film is still propulsively edited and shot with dynamic bravado by Rodrigo Prieto ("Argo"), time whipping by like a coke-addicted Olympic sprinter, unlike the full 161 minutes of "The Hobbit: The Desolation of Smaug." Upon reflection, maybe the final edit could have been tighter without dulling its point and energy, but while being a blast, it simultaneously blows the lid off of Wall Street once again, proving that some still seem to think the almighty dollar is the key to happiness and success. "The Wolf of Wall Street" is the type of film that doesn't care if you like it or if it offends you, much like its illegally filthy-rich subject, but it won't be easily forgotten, either.