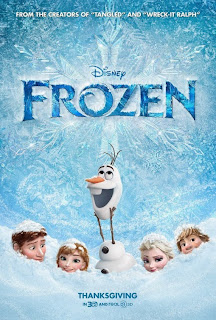 It seems like one can easily turn to mush when it comes to an animated film, but even the trustworthy Pixar has had a slip along the way, as in the mediocre "Cars 2." Quite the contrary, Disney Animation Studios rarely ever disappoints—especially after the consistent quality of 2009's "The Princess and the Frog," 2010's "Tangled," 2011's "Winnie the Pooh," and 2012's "Wreck-It Ralph"—and their 53rd feature film, "Frozen," is more than worth its salt like any live-action film. Loosely adapting Hans Christian Andersen's fairy tale "The Snow Queen," directors Chris Buck (2007's "Surf's Up") and newbie Jennifer Lee (a writer of "Wreck-It Ralph"), working from Lee's screenplay, conjure up a lively, immensely entertaining, and dramatically affecting delight that has what it takes to make a name for itself as a winter-themed classic.

Right out of the gate, from the unexpectedly stirring sounds of men chanting on a frozen ocean, "Frozen" announces itself as a "The Lion King" within Disney's pantheon of more emotionally resonant animated films. Then we're immediately invested in the once-close relationship between sisters Anna (voice of Kristen Bell) and Elsa (Idina Menzel), the daughters of the King and Queen of the shoreside kingdom Arendelle. Elsa was born with the power to freeze, which comes close to taking the life of her sister. She will need to learn to control it, limiting her contact with people and keeping her powers hidden from everyone, including Anna, whose memory of the accident and her sister's powers have been erased by a magical troll. Elsa is closed away to live in her room for much of her life, always shutting out Anna to protect her. After the death of their parents and three years later, Elsa is of age to take over as queen, and while gearing up for her sister's Coronation Day, clumsy, wide-eyed Princess Anna meets the dreamy Prince Hans of the Southern Isles (Santino Fontana) and considers it true love. When Anna asks for her sister's blessing, the newly crowned Queen refuses and inadvertently reveals her powers not just to Anna but all of Arendelle. Freezing the village and fjord into an eternally chilly winter, Elsa journeys to the North Mountain, building an ice palace to lead a life of solitude, as Anna enlists the help of mountain man Kristoff (Jonathan Groff), his trusty reindeer Sven, and a chatty snowman named Olaf (Josh Gad). Can Anna convince her sister to thaw out the land and bring back summer, and can they make up for lost time as sisters?

Freshly modernized without taking the post-"Shrek" route of pop-culture references and filled with classical echoes of "Sleeping Beauty" and perhaps even "Beauty and the Beast," "Frozen" finds ways to eschew the conventional Disney-princess trappings, vibrating with life of its own and engaging, fully rounded characters, while subverting the norm by giving us more proactive female characters and not giving us an obvious prime villain for a long time. Its Broadway pedigree of voice performers and song writers might have something to do with the abundance of energy, too. When it comes to animated-movie music, songs only prove to be memorable sing-alongs if one immediately seeks them out afterwards. Here, four songs stand out, being originally written by Kristen Anderson-Lopez and Robert Lopez (he wrote the music and lyrics for "Avenue Q" and "The Book of Mormon"), and they all exist as narrative tissue. "Do You Want to Build a Snowman?" touchingly conveys Anna's favorite pastime and the sisters' loving bond that's nearly lost; "For the First Time in Forever" is Anna's beautiful anthem of hope and then reprised with Elsa; "Love is an Open Door" is a catchy, joyously written romance duet between Anna and Hans before she hastily accepts his proposal; and the biggest show-stopper of all is "Let It Go," sung from the heart by Idina Menzel, when Elsa feels her freedom after fleeing Arendelle.

Actors are too often underappreciated for their voice performances, but Kristen Bell and Idina Menzel completely shine through as Anna and Elsa, doing a great service to define the sisters' relationship. Bell is charmingly daffy, sweet, and plucky as Anna, who doesn't want to be lonely anymore, and Menzel never plays Elsa as a villainess but as a long-suffering woman sacrificing the happiness of her own life for others. Jonathan Groff makes for an affable "Prince Charming" as Kristoff, a mountain man trying to get his ice business off the ground, and Josh Gad is adorably funny as Olaf, a snowman who was built by Elsa for Anna during their childhood and yearns for summertime, even if that means the end for him. Alongside Timon & Pumbaa, Dory, and others, he's a talking, animated sidekick to cherish.

As you watch "Frozen," it feels lovingly assembled and anything but a rush job for the holiday season. The animation is a gorgeous marvel; the song-and-dance staging inspires wonder and the action set-pieces, including attacks by wolves and then an abominable snowman and a surprisingly intense ambush on Elsa's new palace, are exciting; the pace never flags; and the writing is clever and funny. Above all else, the film has a warm heart amidst the icy setting and strong messages not only about true love but the bond of sisterhood. Splendid entertainment, no matter your demographic, "Frozen" proves there's still power in animation to weave a spell of joy and grand emotion. The hype is real; this is in the league of Disney's best.