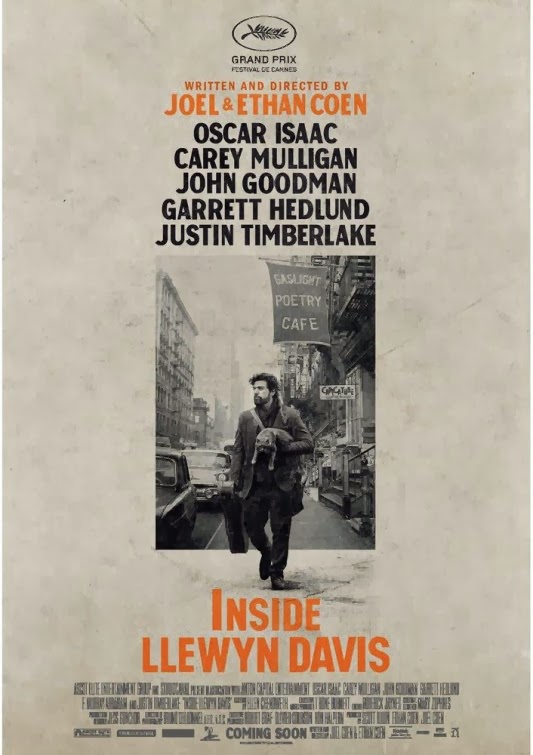 Joel and Ethan Coen have never been filmmakers for mainstream taste and conventional storytelling. Even if some of their endeavors haven't all been satisfying or flawless knocks out of the park, the Coen brothers have never made a movie that felt impersonal, and they never sell out their knack for deadpan absurdity, shaggy-dog stories and oddball characterization. Their latest, "Inside Llewyn Davis," is a confirmation that no one else makes movies like they do. Very loosely based on folk singer Dave Van Ronk, it's not a rise-and-fall story but a fall-and-fall-some-more story with a cynically honest path for its eponymous character. An artist needs a little rejection before reaching his or her success anyway, right?

"Inside Llewyn Davis" is set during a wintry week in New York's Greenwich Village in 1961, centering on the churlish, rootless Llewyn Davis (Oscar Isaac), a talented but struggling folk singer who just can't win. He used to be half of the duo Timlin & Davis before Mike Timlin jumped off the George Washington Bridge, so now he plays as a solo act. Down on his luck and having no home other than a series of couches to crash on, Llewyn is constantly on the road with his guitar and no winter coat, hoping for a breakthrough. He stays with an older couple, the Gorfeins (Ethan Phillips, Robin Bartlett), and when he leaves in the morning to an empty apartment, the pet cat ends up escaping, so Llewyn takes the feline with him. Along the way, he stays with sister Joy (Jeanine Serralles) and then musical couple Jim (Justin Timberlake) and Jean (Carey Mulligan), the latter being an angry ex-lover of Llewyn's who is pregnant with either his or Jim's baby. Folk music is Llewyn's livelihood, even it makes nothing, and his life is just one hardship after another. Will he continue struggling to find success in his passionate form of expression or rejoin the merchant marines and ship out?

Written and directed by Joel and Ethan Coen, this transfixingly offbeat character study and love note to folk music isn't shackled by traditional character redemption but by the brotherly filmmakers' lack of adherence to a tidy, clear-cut bow or three-act structure. There's no woodchipper à la "Fargo," and it's still not warm and fuzzy. The film is as episodic as a road movie, with Llewyn's ride to Chicago with bitter, drug-addicted jazz musician Roland Turner (John Goodman) and his mostly mute driver Johnny Five (Garrett Hedlund) adopting an absurd surreality. Besides the fact that Goodman is a Coen film veteran, these two are straight from the Coen canon. The scenes between Llewyn, his dinosaur agent Mel Novicoff (Jerry Grayson), and Mel's elderly secretary Ginny (Sylvia Kauders) are also very funny in the quirky details. Llewyn even gets a short-lived gig, singing the goofily catchy "Please Mr. Kennedy" with Jim and Al Cody, played by Adam Driver who brilliantly exaggerates vocal sound effects like "uh-oh" and "outer…space."

The Coens craft Llewyn's odyssey in a never-ending circle because the character is a hapless victim of his own mistakes and his own worst enemy, even though he's talented; where we meet him is where we leave him. Like the brothers' cruelly existential "A Serious Man," Llewyn lives in a universe that is random and unpredictable and keeps pranking him. He isn't an instantly appealing protagonist that everyone will want to follow, as the Coens are pretty consistent in never letting the self-righteous, often off-putting Llewyn off the hook or letting him succeed. Were it not for Oscar Isaac, the character might have been too frustrating to handle, but in this long-overdue, star-making lead role, he's stunningly charismatic and identifiable. Even after he's been awful and selfish, we can't help but root for him and hope he aces his audition for Bud Grossman (F. Murray Abraham). It's also great to see Carey Mulligan all prickly and insult-ready as Jean, who thinks Llewyn is a loser and rips him a new one ("I should have had you wear double condoms. You should be wearing condom on condom, and then wrap it in electrical tape.")

There's a lot to appreciate here, from the beautifully washed-out, soft-glazed palette of Bruno Delbonnel's cinematography to Jess Gonchor's production design of the Greenwich Village milieu in the '60s and the folk scene in the Gaslight Club. And if you didn't think you liked folk music, you will. "Fare Thee Well," a cover performed by Isaac and Marcus Mumford of Mumford & Sons, is particularly poetic and vivid, as is Isaac's soulful opening performance of "Hang Me, Oh Hang Me." A synergy of the Coens' unique visual style and not-always-likable characters, "Inside Llewyn Davis" is something special with a "take it or leave it" attitude that cinephiles and Coen completists will want to take. (They also give us another scene-stealing orange tabby after "The Ladykillers.") Bookending with an artist's passion and pain, it's starkly melancholy, pungently funny and, finally, sneakily moving.