Bros, Sex and the City: "That Awkward Moment" has moments but not easy to like 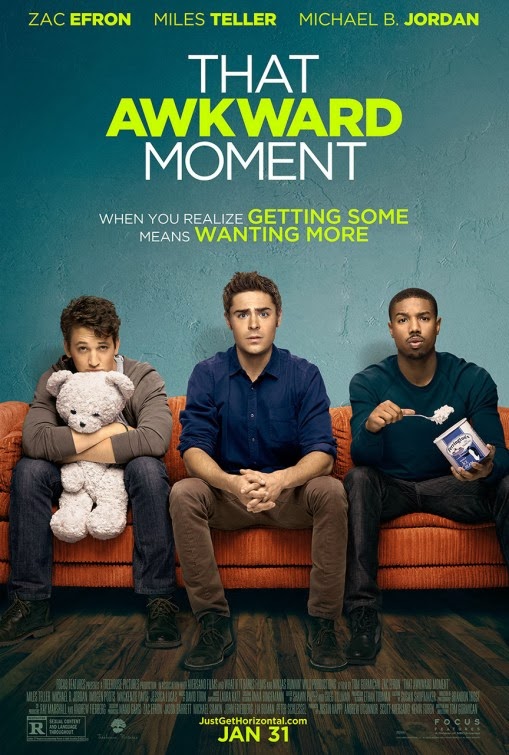 With the objective to deliver insight into the dating world from the male psyche of the Facebook generation, "That Awkward Moment" is too juvenile and superficial to pass the litmus test on that ambition. Though amicable enough as twentysomething bromantic comedies go, it is never as charming as it ought to be, either. Zac Efron, Miles Teller, and Michael B. Jordan are all red-hot, appealing breakout actors who have charisma to burn and have proven their worth in previous projects, so what's not to like? Helmed by first-time writer-director Tom Gormican (whose shining sole credit is co-producer of the notorious "Movie 43"), the film treats its trio of young men as if we should relate or be amused and endeared that they treat the opposite sex like used paper towels, but the second-rate script doesn't make it so easy, especially for Efron, who's clearly the main attraction for female audiences. If one can tune out all the film's many problems, the stars of "That Awkward Moment" make it more tolerable than it has any right to be.

Calling it quits whenever a girl asks him, "So…where is this going?" ("The So," as it's called) and keeping a roster of friends with benefits, Jason (Efron) is a confirmed player who avoids commitment with his conquests. He works as a Manhattan book-cover designer with the chatty Daniel (Teller), who snags girls by friend and "wingwoman" Chelsea (Mackenzie Davis). Their bud Mikey (Jordan) has "checked all the boxes," having gotten married at 23 and now working as a medical resident, until his wife Vera (Jessica Lucas) tells him she's been sleeping with their lawyer and wants to split. Jason and Daniel make a pact with Mikey: they'll all swear off serious relationships for casual, guilt-free hookups. Hey, what are friends for? The plan goes off without a hitch until the right women come along, natch, and Mikey tries patching things up with his wife. This all happens in secret, though.

Bawdy but simultaneously tame and too often unctuous, "That Awkward Moment" doesn't say anything new or smart about relationships that all 94 episodes of "Sex and the City," the two feature films, and 2009's "He's Just Not That Into You" haven't already covered, even with the gender reversal. The capacity of substance boils down to the "bros before hos" code and the notion that even guys can commit to relationships when push comes to shove. With a pact made by male friends, writer-director Gormican's feature debut would love to be "American Pie," but the brainiac premise fritters away into genre convention and the stakes remain low since the girls could do better. Of the three friends, it's awfully hard for Jason to warmly work his way into the viewer's hearts. Upon first meeting Ellie (Imogen Poots), a smart, cool, effervescent publishing colleague, he takes her to bed and then takes her for a hooker. Is this really the kind of guy that deserves any concern? Efron has certainly come a long way since "High School Musical" (he had the pleasure to be urinated on by Nicole Kidman in 2012's "The Paperboy"). The talented pretty-boy star convinces in the role of Jason, preening and taking on a J. Crew model swagger, but his character is the hardest to root for, let alone like, especially when he attends his friends' Thanksgiving party instead of going to a girl's father's funeral (!), so it doesn't seem as if they're dating. Rightfully being called an "asshole" and an "idiot" throughout, Jason comes off as such a smarmy, selfish, immature prick that Ellie should steer clear of him, not keep running back to him. He is clearly out of her league. If only the one-note Jason wasn't so thinly sketched and too big for his britches, then maybe it wouldn't be so unforgivably phony when he has to learn his lesson with an out-of-nowhere dramatic plot device. Oh, and the dude is so smoothly romantic that he can get away with stealing a key from an expensive real-estate property and not be called out as a thief.

When Jason, Daniel, and Mikey are just sitting around, having coffee, hanging out at the bar, or staying in to play Xbox, the three 26-year-old actors have an easy, affable camaraderie that makes them feel like real friends. Teller is better as Daniel, doing his reliable off-the-cuff, motormouth shtick from "21 & Over" and firing off some amusing one-liners. He genuinely likes Chelsea, purposely blowing off a woman at the bar, so even when he speaks like a frat boy, Daniel is more likably rakish than heartless. As Mikey, Jordan holds the most empathy, so, of course, he's the most underused (which is a disappointment, considering what he was capable of in "Fruitvale Station"). His love-story thread might even be handled the most honestly without wimping out, but it's relegated to Mikey and Vera being more spontaneous in where they knock boots. Their female co-stars are classier, instantly winning, and more interesting company that it's a shame their comparatively put-together characters are so underserved. The fetching Poots lends the most spark as Ellie, but she's treated with an undeserving sexism and insensitivity by her so-called Mr. Right. As the musical, self-deprecating Chelsea, who seems like a real guy's girl, Davis is a fresh face with a warmth, modesty and humor about her, but she's way better than the thankless part written for her. Finally, give it to Josh Pais for bringing the laughs as Jason and Daniel's awkward boss.

"That Awkward Moment" finds de rigueur R-rated raunch in the characters' locker room-type conversation and running gags involving bowel movements and misunderstandings. Self-tanning lotion gets mistaken for masturbation lotion and a "dress-up party" is taken as a costume party, but "horizontal urination" for Viagra-induced erections is actually one of the more inspired gags. Writer-director Gormican has an ear for the snappy rhythm of dialogue (and Teller has the mouth for it), but he's a better director than writer. Invitingly shot fall-season locations in New York City (such as Gramercy Park) and David Torn's '80s-style music score surprisingly stand out for a generic comedy. 1997's "Jerry Maguire" gets a name drop, but that doesn't excuse the film from its mixed messages nor make a romantic public apology at one of Ellie's book readings any more endearing. It just comes off disingenuous to reach a foregone conclusion. The engaging cast can only do so much to elevate a script for the long haul, but still get away with carrying "That Awkward Moment" to the finish line with their super charisma. The real awkward moment comes when everyone on screen has more appeal than the film itself.