Invasion of the Throwback: "Almost Human" gooey, well-made fun where it counts 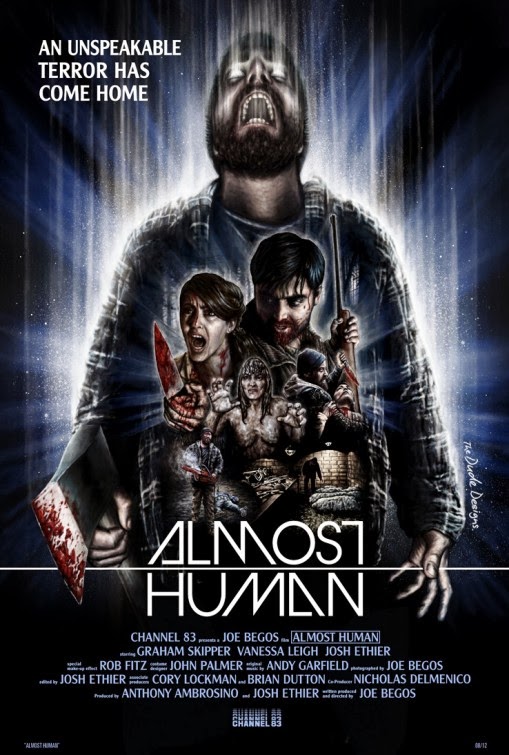 A low-budget effort doesn't have to mean low-rent when spirit overshadows cost limitations. Case in point: "Almost Human," a nifty, scrappy grab-bag of alien abduction, backwoods-slasher splatter, and genre-loving homage. It will also work as a calling card for first-time indie filmmaker Joe Begos. Only on this planet for 25 years and the writer-producer-director-cinematographer-maybe-even-craft-service-department really knows his 1980s horror, as if he's been watching every bloody, gutsy flick on VHS since he came out of the womb. The influences are certainly there, but "Almost Human" trades in meta shout-outs for an irresistible weirdness all its own.

The film opens on the night of October 13th, 1987, in the small town of Patten, Maine. That night, Seth (Graham Skipper) frantically knocks on the door of friend Mark (Josh Ethier) after witnessing their other buddy getting sucked up into the sky by a blue, piercingly loud beam and then vanishing. Soon after, Mark's body is snatched up, too. Two years after the county encountered a power outage and the disappearances of his pals, Seth is having bad dreams about Mark returning. Sure enough, two hunters stumble upon the missing Mark naked and covered in a slimy substance in the woods. He not only goes on a killing spree, but might have a bigger agenda. Not to mention, Mark's former girlfriend, Jen (Vanessa Leigh), has moved on, now engaged with Clyde (Anthony Amaral III), but we all know he's toast. Before Seth and Jen even know of Mark's return, they already have a feeling something bad is about to happen.

Gooey, gory, blood-drenched, and proud of it, "Almost Human" is old-school fun and blessedly free of any cheap CGI, catering to those who prefer the latex-made practical effects of years gone by. That's just part of the film's modest, shoestring-budget charm. An opening sound mix of crickets chirping and piano keys remind of "Friday the 13th," and the credits' font is very John Carpenter-esque, as are touches of Andy Garfield's cool, ominous synthesizer score. Aside from one glaring editing faux pas that makes an abrupt change from night to morning, the film's overall production values are reasonably polished and more assured than not. Director Begos does not pussyfoot around with the gnarly on-screen kills, either; a daytime set-piece of the shotgun- and chainsaw-wielding Mark invading upon the new owners of his old house is particularly tense and brutal. That brings us to the acting. Some of the stiff dialogue doesn't help, but Begos was smart in finding three competent leads in the wide-eyed Skipper (who oddly resembles Daniel Radcliffe in certain shots), the imposing Ethier, and the sincere Leigh to carry the film and limiting the screen time for the untrained, plainly amateurish actors.

As a down-'n'-dirty genre throwback, the film shouldn't have to do anything new, but even in its breed of do-it-yourself horror filmmaking, the pic isn't quite up to the levels of Ti West or Adam Wingard. More icky than scary, but occasionally creepy and inventive in its own right, "Almost Human" takes a boldly bananas direction that recalls the gross bodily horrors of "Species" and "Slither" without a wink. Then, once the "Night of the Living Dead" finale hits, the outcome turns out to be little more than an anticlimax. Still, on the whole, there's nothing wrong with an enthusiastically made B-movie quickie when the man putting it together slathers his film in affection and solid craftsmanship.