Relax, Don't Do It: "Interior. Leather Bar." a stunt that still provokes 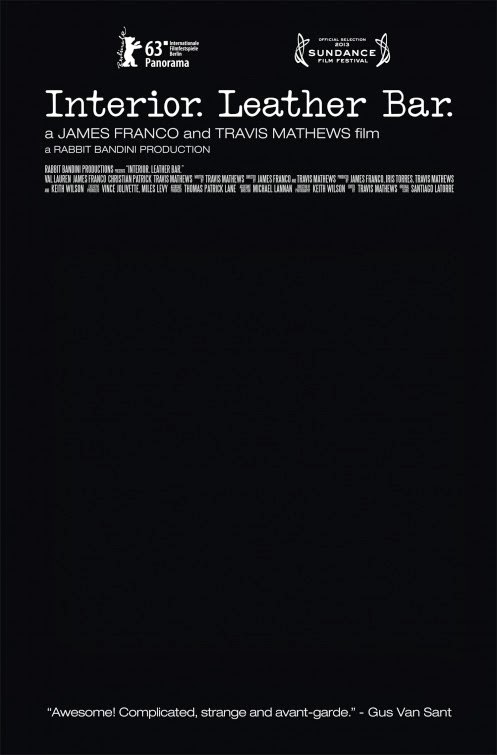 Controversial with the MPAA ratings board before its 1980 release, William Friedkin's film "Cruising" starred Al Pacino as a straight cop going undercover in the underground NYC gay leather bar scene to investigate a series of unsolved murders. Plagued with protests from the gay community who claimed the film was homophobic and even death threats, Friedkin was forced to cut 40 minutes of footage, primarily gay S&M sex, to secure an R rating and avoid an X. That is the basis for the docu-fiction effort "Interior. Leather Bar.," and the mission statement for its makers, actor-director James Franco and documentary filmmaker Travis Mathews, was to interpret and recreate the aforesaid sexually graphic lost footage. "Is this something that we, as the artists working on it, are going to manipulate to make a certain point or do you just want it to be what is?" inquires actor Val Lauren, who reluctantly signed on to play the Pacino character. And right there, he hits the nail on the head. Is "Interior. Leather Bar" just a pretentious "art" stunt or is it actually saying something? Perhaps it's a little bit of both because, like all art, it's very subjective.

Knowing Franco for fifteen years, Val Lauren trusts him, but also questions why he's doing the project in the first place. His buddy thinks he's crazy and his wife isn't thrilled about it, but she mostly cares about him returning home for dinner on time. Lauren is uncomfortable and has his limits, but never offends anyone, either. Meanwhile, the gay and straight actors cast to play the gay leather clubbers who are looking for action are just as confused, but they leapt at the chance to work with Franco. With this project, Franco hopes to normalize the queer lifestyle as a case study in cultural assimilation to examine artistic expression, mainstream narrow-mindedness, and the testing of limits and taboos in the filmic medium. Franco conveys to Lauren his passionate ideas about how non-fetishized sex should be placed into the mainstream as a powerful storytelling tool instead of titillation, and he has a point. He wants to say what he wants to say and he follows through.

Barely a full hour with credits, "Interior. Leather Bar" is a fascinating, if slender, idea for a film-theory discussion with enough room for some feature "padding." Thought-provoking and often hypnotic, this project does enough right, blurring the line between documentary and film-within-a-film and opening a window into this less-than-mainstream world of leather bars, but it's still a staged experiment with explicit (and, as can be assumed, real) fellatio by a pair of real gay lovers who are called onto the set. Although it addresses some intelligent points to take away, the film mostly elicits a shrug without achieving what it fully sets out to do. Val Lauren may be a changed person after the experience than how he started, like the Pacino character, but it might not alter the point-of-view of those watching. Still, Franco begins the conversation, whether or not you're open to dicussing it further. Leave it to the multi-tasking star to think outside of the box and challenge himself, his cast and crew, and audiences with yet another side project that isn't Disney's "Oz the Great and Powerful."