How the West Killed: "Million Ways to Die" isn't unfunny, but far too spotty 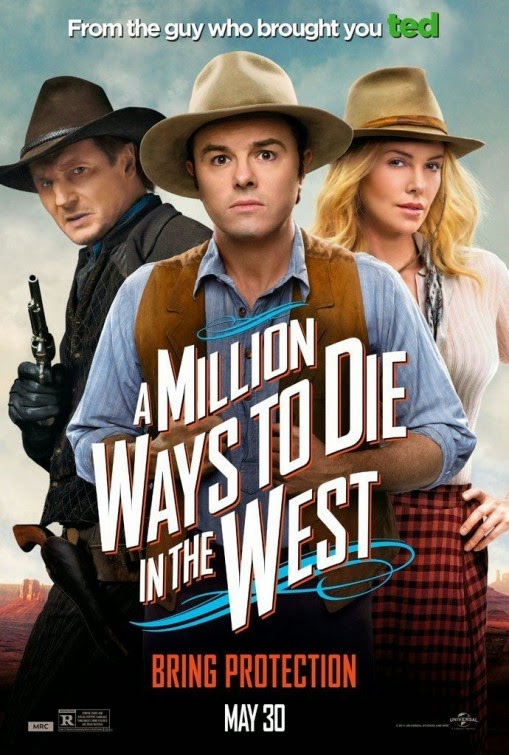 Writing, directing and starring in comedy features must elude "Family Guy" creator Seth MacFarlane's grasp. After his writing-directing debut with 2012's likably raunchy "Ted," which mined plenty of laughs and heart out of the eternal friendship between a talking teddy bear and Marky Mark Wahlberg, Wild Wild West spoof "A Million Ways to Die in the West" marks MacFarlane's sophomore slump, and he stars in it, to boot, without voicing a cactus or a talking lizard. Chockablock of all-variety humor—pick your poison between verbal puns, pratfalls, random cameos, meta in-jokes, sex jokes and scatological gags—the film has enough spread, if not enough seasoning; while inspired pop-culture jokes are MacFarlane's stock-in-trade, there arguably aren't enough of them here. Underwhelming is different than straight-up bad, and that's where the writer-director-producer-star's follow-up plainly rests. You pull for this sweetly silly, irreverent romp, even though it misses the mark of having much enduring stamina and its chances of beating Mel Brooks' unmatched 1977 spoof "Blazing Saddles" are slimmer than slim.

MacFarlane, casting himself as the live-action lead, plays Albert Stark, a cowardly sheep farmer who has somehow gotten this far living in the American frontier's harsh, death-stained terrain, specifically the Arizon town of Old Stump during 1882. There, he would rather talk himself out of a gun fight than resort to violence, but that doesn't work in the Old West or for his girlfriend Louise (Amanda Seyfried), who excuses that she needs time to figure herself out and breaks up with him. Not much later, Albert sees Louise being courted by the well-off, mustachioed Foy (Neil Patrick Harris), so he plans to leave for San Francisco. Plans change, though, when the feisty, gunslinging Anna (Charlize Theron) comes to town and takes an interest in the sweet, kind Albert. She neglects to tell her new friend that she's trying to run away from her old life with husband Clinch Leatherwood (Liam Neeson), a notoriously vicious bandit who's on his way to Old Stump, but in the meantime, Anna can teach Albert how to shoot, while making Louise jealous, and Albert will prove to be just the kind of man Anna always wanted.

Beginning as an affectionate valentine to the western genre with one of those long, old-timey credit sequences against Monument Valley and over a jaunty score, "A Million Ways to Die in the West" does not get off to a fast-and-furious foot. It's initially rather limp, leaving one to wonder when the jokes will pick up a clockwork rhythm, and then things step into somewhat of a groove. Loopy and absurd, the primary joke about the Old West being one big death trap is certainly a workable one, as Albert repeatedly harps, "The American West is a terrible place in time. Everything out here that isn't you is trying to kill you," and Louise mentions that the life expectancy in this "disgusting, dirty, awful cesspool of despair" has now passed 35. Since the film is sending up westerns, it's modeled after the genuine article and set in the 1800s, but holds a modern, anachronistic attitude, insofar that characters casually use expletives and bake pot cookies. The screenplay, co-written by MacFarlane and longtime "Family Guy" writers Alec Sulkin and Wellesley Wild, tends to go against the creator's brand of smart, subversive satire with lazy, base fecal humor that could have been curtailed or excised from the final edit altogether. Also, when it comes time for the film to start winding down, intentional laughs are placed on the back burner so a serious horse chase can play out.

Being in front of the camera instead of contributing just his voice, Seth MacFarlane is sincerely likable as the cowardly Albert, but it's mostly MacFarlane doing his thing. The adage, "Dying is easy, comedy is hard," may be true, but Charlize Theron can do both and she's such a terrifically appealing comic foil for her director/co-star. Here, as Anna, Theron is a joy, getting the refreshingly rare opportunity to play loose comedy and elevating MacFarlane onto her level. Her scenes with MacFarlane, including sitting and rolling a joint, taking in the deathly sights at the county fair, attending a formal dance and practice shooting, are winning and even believable within the confines of a movie that a woman like Anna would think a man like Albert was a catch. That leaves the majority of the game-for-anything cast to have a field day with what they have. The ever-reliable Giovanni Ribisi and Sarah Silverman, though disappearing all too frequently, are a spry team as Edward, a virginal shoe repairman and Albert's best friend, and Edward's Christian prostitute girlfriend Ruth who wants to hold out until marriage with Edward but cluelessly has no problem having sex with paying customers each day for work. They play their subplot with straight faces, which is always the funniest approach. Amanda Seyfried looks like she couldn't be bothered as the self-involved Louise, but at least she is down for a joke thrown at the expense of her saucer eyes. And it's about time someone cast Neil Patrick Harris as a smarmy, literally mustache-twirling villain, and while he gets saddled with one prolonged poop joke, he almost makes it funny before a gratuitous cutaway.

Like a lot of contemporary comedies that try to satisfy all tastes, the end result of "A Million Ways to Die in the West" is hit-and-miss. For every joke that lands with a thud or just totally lacks a payoff, MacFarlane sticks the landing every once in a while. We could probably do without the sight of a sheep peeing in someone's face. A song and dance to "If You've Only Got a Moustache" is spirited, but not as clever as it could have been. A reference to the western-themed "Back to the Future Part III" is fun in recognition, but it sadly doesn't go anywhere. However, the film does have an amusing running joke involving Old West photographs, where no one smiles, as well as a bit with the never-before-seen dollar bill; a funny fake barroom bout; a hilarious flashback with Abraham Lincoln; an admittedly lowbrow chuckle with a daisy and Liam Neeson's posterior; and a psychedelic Native American Indian drug-induced trance through Albert's life cycle that earns a guffaw. It's the combined charm of MacFarlane and Theron that performs a fireman's carry on "A Million Ways to Die in the West," smoothing over the occasional sophomoric gag and a rambling, self-indulgent 116-minute running time. Even when individual bits and a general affability make somewhat more of an impression than the movie as a whole, this fun-while-it-lasts lark is hard to hate through the dead spots a tumbleweed could blow through. It shouldn't kill you.