Save My Ride: "The Rover" a riveting shaggy-dog slow-burn 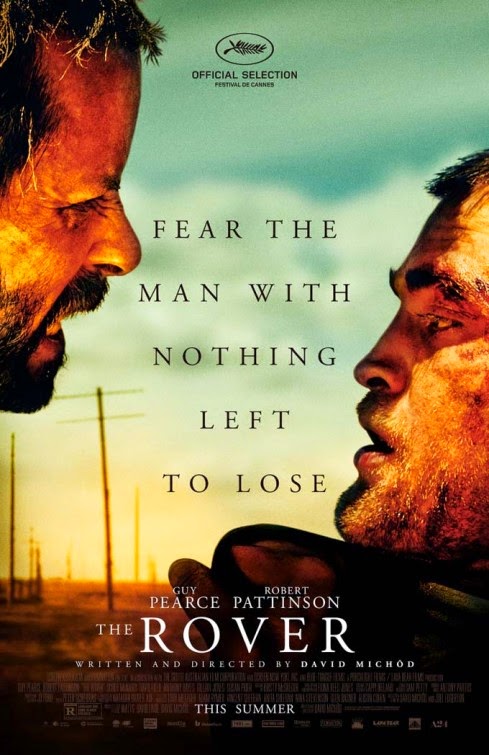 Australian writer-director David Michôd's first film, 2010's gripping, assured and densely crafted crime drama "Animal Kingdom," was set in a harsh, tough world of an organized crime family. In contrast, "The Rover" is laconic, stark, spare and still effectively unsparing as ever in its violent battle of wits over a vast, bleak, harsh post-apocalyptic landscape. From a story by Michôd and actor Joel Edgerton, the film is much ado about nothing when you get down to it, but it's fully absorbing in the way it moves at a divisively deliberate but significantly elegiac clip that of a slow burn, punctuated by levels of unbearable tension and abrupt, savagely grim acts of desperate violence. By some, "The Rover" will be equated to a tedious slog, but it hooks and holds the viewer and never plays safe. Lives are taken and all hope is lost.

The time and place is ten years after the financial and societal "collapse" in the Australian Outback, which has now been reduced to a lawless, moneyless wasteland with the prices for water and petrol having costing an arm and a leg. A damaged, taciturn drifter (Guy Pearce), anonymous in the film but credited as "Eric," goes into a crummy bar for a drink. All of a sudden, three criminals (Scoot McNairy, Tawanda Mayimbo and David Field) who have just committed a crime flip their vehicle right past the bar and then steal Eric's car. Eric does manage to give them a chase, catching up to them in their still-functioning car to retrieve his own, but he winds up hooking up with the leading car thief's half-wit brother, Rey (Robert Pattinson), who was left for dead with a gunshot wound. After getting Rey fixed up, they set out in pursuit of Rey's brother, but Eric has nothing to lose — he just wants his car back, even if that means using Rey as bait.

From the very first frame, director David Michôd lures the patient viewer in, holding his shots a few beats longer than one might expect and allowing us to take in the quiet buzzing, stillness and desolation of such a dry, dangerous landscape. The particulars of "the Collapse" are ambiguous, and that's okay because "The Rover" is a shaggy-dog story. Eric is a bitter man with a singular goal. Wanting his car back is his top priority and the reason being is, for a good chunk of the film, a McGuffin. Although the contents in Eric's car are kept close to the vest, there is a sly hint in one of Eric and Rey's stops in retrospect. No matter his IQ, Rey might be just as dangerous; even if he's not all there, he feels betrayed by his big brother. The story's unpredictability comes in human nature, as it's not always clear which loose cannon has the upper hand. The film takes an unsettling detour to a travelling cirus of dwarves and other freakshow characters, led by a calm, seemingly genteel grandmother (Gillian Jones) who perpetually sits in a chair by the window, knitting and, upon Eric's entrance, offers him a young boy. When he asks if she has seen three men drive by in a car, she responds: "What a thing to get worked up about in this day and age."

Guy Pearce is haunting in conveying the wounded heart of Eric, whose rage in his eyes (and gun in his hand) rarely ceases to intimidate. The jury might no longer be out, as Robert Pattinson has put a stake in the "Twilight" franchise and now seems to make edgy, interesting choices to challenge himself. As the developmentally stunted Rey, Pattinson gives himself completely to a seemingly simple-minded young man whose volatility makes him dangerous. Chilling and touchingly pathetic in equal measure, his convincing and persuasive turn initially seems studied, but whether it be Michôd's direction, Pattinson's chops, or a combination of both of their efforts, it resists falling head-on into showy, actorly tics. This could be the tip of the proverbial iceberg in Pattinson's admirable career transformation from a pretty, sulky matinee idol to a more nuanced and instinctive actor of unexpected gravitas.

A visual and aural ace, from cinematographer Natasha Braier's stunningly gritty lensing dusty, sun-scorched Australia, to Anthony Partos' moody score and Sam Petty's ominous sound design of nervy, dissonant clanging sounds, "The Rover" builds an edgy black cloud of dread and rarely lets up. (In the middle of the film, the jarring use of Keri Hilson's bouncy "Pretty Girl Rock" is a thing of offbeat brilliance, too.) The film isn't without a draggy middle that taps dry some of the tension, although whether that's a criticism or an observation is in the eye of the beholder. Eric's journey to the heart of darkness is an inevitable exercise in futility, as not much hope or victory waits on the other end. It feels kind of pointless, but it is riveting to watch. The final moments are initially befuddling and then subtle and heartbreaking that one doesn't know if laughing or a more guttural reaction is the correct emotion. The boiling heat and dry desert will be felt, and so will the emotional wreckage of both men. Don't even try shrugging this one off because it won't work.