As Bad As It Gets: Flat, charmless "And So It Goes" does its actors zero favors 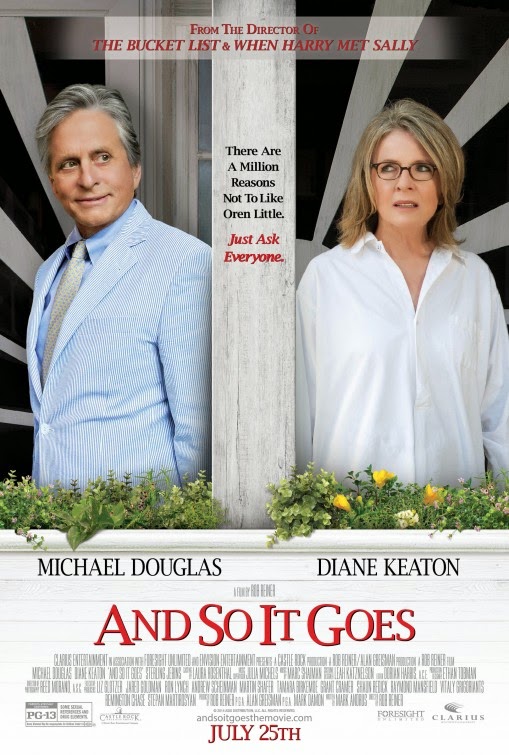 There was a time when director Rob Reiner (2012's "The Magic of Belle Isle") used to make wonderful films like "This Is Spinal Tap," "Stand by Me," "The Princess Bride," "When Harry Met Sally…," "Misery" (and say what you will about "The Bucket List" but "The Bucket List"), but it is just depressing and cringe-inducing at this point. And so it goes with "And So It Goes," which was clearly meant to be a romantic comedy with dramatic pathos about second chances, but resulted in flat-footed, cookie-cutter, infuriatingly unworkable crumminess. The never-before-worked-together Michael Douglas and Diane Keaton sharing the same space and breathing the same air on screen sounds lovely on paper, but elevation from two old pros makes no difference in what an aimless, terminally bland misfire came out of shooting from an awkward, flavorless screenplay by Mark Andrus (2007's "Georgia Rule") and then presenting the finished product to ticket-buyers as a would-be romance between charismatic sextenarians. Everyone need not bother because "Something's Gotta Give," this certainly is not.

Since losing his wife, misanthropic realtor Oren Little (Michael Douglas, in crotchety Jack Nicholson mode) just wants to sell his family mansion and retire. In the meantime, he owns a fourplex building with close-knit neighbors who can barely tolerate him, including compassionate widow Leah (Diane Keaton). Oren gets thrown for a loop when his estranged son Luke (Scott Shepherd), now clean from a heroin addiction, shows up and asks Dad if he can watch his 9-year-old daughter, Sarah (Sterling Jerins), while he gets sentenced to prison for nine months. Instead of taking Sarah in, Oren pawns her off to Leah, who would rather watch the little girl than see her be neglected by her grandfather. Of course—and there is a lot of "of course" going on here—Oren and Leah become makeshift grandparents who open their heart, not only to Sarah but to each other. Who knew that all Leah and the seemingly heartless Oren needed was a quick fix in the sack together?

With a premise so stale and contrived, there might have been hope in how Reiner carried it all out with his two stars and a witty script, but "And So It Goes" is torpedoed by its very own protagonist whom we should be pulling for and find rakishly lovable. No such luck with the irreparably off-putting Oren Little whom one would never want to meet in real life. Why Oren remains such an insufferable, irredeemable prick is beyond flimsy. He misses his wife, but complains upon climbing up a tiny hill to visit her gravestone. As a realtor, Oren is patronizing and casually racist to potential homebuyers, putting up picture frames of a Chinese family when showing it to a Vietnamese family or assuming a Hispanic couple cannot speak a lick of English. To prevent a Rottweiler from squatting on his lawn, he shoots it with a paintball gun. When his adult son comes back into his life, Oren refuses to watch the granddaughter he never knew he had. To the 9-year-old Sarah, he warns her to stay away from his neighbor's son's penis. To clarify, Oren does not need to be rewarded forgiveness or even a warm mojito, just a swift kick into the trunk of his car. Instead of eventually making whoopee with Oren, Leah should have just suffocated her obnoxiously ornery and insincere neighbor with a pillow.

Marginally supported by a slick, sunny disposition and inviting, postcard-pretty Connecticut locations that Nancy Meyers need not grow envious of, the film still comes with a host of other problems. Most of the jokes are strained and desperately lame. The tone is unusually atonal, at one point lurching from Sarah meeting her biological heroine-addict mother to one of those tired, last-resort humping-dog visual gags. The pacing is lackadaisical, scenes of Oren and Leah conversing on their porches particularly deadening. Not immune to playing unlikable characters in the past, Michael Douglas plays up Oren's unctuousness so much as if to see how hard he has to work to make the viewer like him back. To no avail, it's just a hopelessly charmless, one-note performance and, needless to say, not one of Douglas' finest hours. Luckily, at least when the script doesn't have the actress resorting Leah to turn into a blubbering, hysterical mess (a passé character trait the actress has patented), Diane Keaton is as effortlessly radiant and unassumingly charming at 68 as she was in her thirties. Leah is easier to be invested in, as she still follows her dream to be a lounge singer at such a mature age (the actress' chance to sing) but can barely manage to get through a set without telling a story of her late husband and melting into a puddle. Her nice one-on-one scenes with Sterling Jerins, who has a sweet, unprecocious presence as Sarah, are the only cause for seeing a light at the end of this film's dreary tunnel. In addition, being typecast as the salty spitfire forever, Frances Sternhagen is just okay as Oren's realty office secretary Claire, who seems to live at her work desk with a cigarette always in between her fingers. And merely for name value, Frankie Valli pops up in one scene as a club owner.

Even if it were aiming to be pleasant comfort food, the generically titled "And So It Goes" goes down as easily as a rock down a garbage disposal. Sometimes, the journey is enough to be worth the effort, but here, neither the journey nor the destination are worthwhile. It's impossible to warm up to, particularly when Oren keeps ruining any scene with Leah and Sarah, and the ending not only manages to be predictable and unromantic, but it's a synthetically gooey, tacked-on slap in the face. Very little of it can be bought for a second, and the less said about Oren's asinine, ham-handed redemptive scene where he delivers a neighbor's baby on his own couch, the better. The final impression of "And So It Goes" could be summed up by the supposed hilarity of Leah's doting, toupeed piano player Artie (played by Rob Reiner) foolishly slipping on a Slip 'n Slide, falling right down on his rump and failing to keep his suit dry. This movie constantly slips and never gets up.