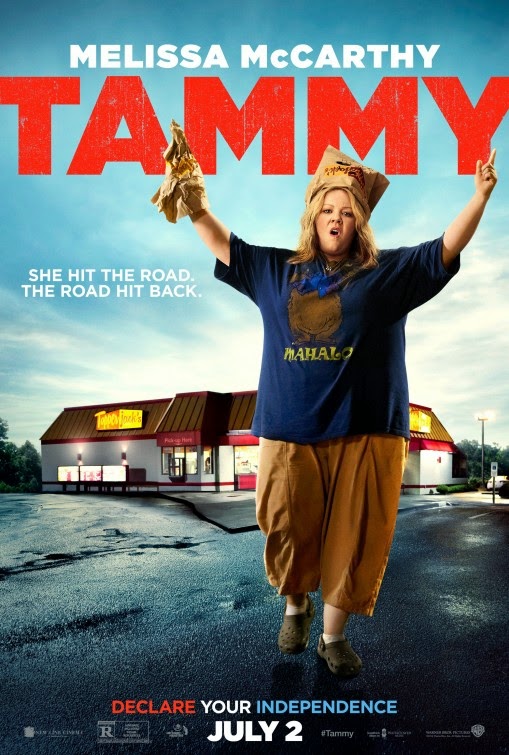 There's no arguing that Melissa McCarthy is both a robustly hilarious, go-for-broke comedic talent and a grounded, vulnerable performer. Knowing when to dive in like a brash, anarchic loose cannon and when to reel it back on a dime and make us believe her tears, she even did it in the criminally unamusing "Identity Thief," which squandered what she could really do. Now, when the chance comes for writer/producer/star McCarthy and husband/co-writer/director Ben Falcone to get the funding for their screenwriting baby, one can't help but root for their passion project to share the same quality ground as "Bridesmaids" and "The Heat." Jagged around the edges and far from perfect, just like its protagonist, "Tammy" is still fitfully amusing and its dramatic moments surprisingly work more often than not. Ultimately, the moderate success of this episodic road dramedy all comes back to McCarthy whose presence alone makes a considerable difference in jockeying material and making it better.

All in the same day, Tammy (Melissa McCarthy) hits a deer on her way to work, gets terminated from her job at fast-food joint Topper Jacks, and then gets home early to find her husband (Nat Faxon) wining and dining their neighbor (Toni Collette). She goes two doors down to her mother's (Allison Janney) house and finds a traveling companion in her grandmother, Pearl (Susan Sarandon), a heavy-drinking, pill-popping diabetic who already has her bag packed ready to go, has never seen Niagra Falls and has a savings of $6,700. Skipping town but never making it to Canada, Tammy and Pearl find themselves in Louisville, Kentucky, getting in trouble with the law, shacking up with a randy farmer (Gary Cole) Pearl's age and his shy son, Bobby (Mark Duplass), for Tammy, while working out their rocky relationship. Tammy is at a crossroads in her life and Pearl needs to take a long look at her own health problems that could either put her in a home or six feet in the ground.

Like in anything, Melissa McCarthy goes for it as the salty, abrasive, slovenly Tammy and she does it all without an iota of movie-star ego, while embracing that she's not a size zero. Uneducated by mispronouncing "Mark Twain" and rude when ruining a rented jet ski, Tammy is big-hearted and confident in her own skin, voicing that men are drawn to her like "flies on shit" when Pearl suggests she use "bees to honey." Sure, she will clumsily pull off a robbery at another Topper Jacks with a restaurant bag over her head and another bag around her hand in the shape of a gun, but her intentions are selfless and she actually ends up returning all of the money and befriending both of the employees she holds up. McCarthy always gets away with tossing off a surprising ad-lib insult and can still make the head-out-of-the-driver's-window amusing. Spending 96 minutes with this larger-than-life creation is probably enough, but it's hard to buy Tammy's previous life with her husband and how she got to that place. Who is Tammy? Has she always just been a fast-food worker? We don't really know, but here's the bottom line: the viewer wants Tammy to get her life together and doesn't mind if she gets her happy ending, man and all. Despite wearing a gray wig and prosthetic cankles as Pearl, Susan Sarandon brings a spryness and extra dash of class. She has a game sense of humor, as when she informs her granddaughter, "It's been a long time since I've had a good servicing," and conveys a sense of pain from the character's history of alcoholism. McCarthy and Sarandon are so funny and endearing together that their confrontation and last scene at a lesbian Fourth of July weekend shindig are capable of touching the viewer.

It's not that McCarthy and Falcone's team effort on the script is awful, but even for a rambling trip that tries finding its likably messy character back on track, it can be underwritten. Tammy expresses to Pearl that they used to be best friends, but due to Pearl's alcoholism, she and her grandmother have always had an unmended conflict blocking their relationship. A better foundation for this granddaughter-grandmother relationship might have made things resonate even more, although it helps to have McCarthy and Sarandon cleaning up the sketchiness of the former's own script. For a vehicle tailored to McCarthy and her strengths, everyone else steps out of her way, including director Falcone who lets his wife fly. The star and writer has clearly made friendships along the way, but the bright supporting cast deserves more than what the script grants them that it's rather unfortunate so much talent is in the front of the camera and then neutered and/or wasted. Mark Duplass is his charming self, but his Bobby and McCarthy's Tammy don't make much sense as a couple, not because of their size difference but because we never really see what makes Bobby equally such a mess. Allison Janney doesn't get the opportunity to showcase her bread and butter as Tammy's mother. Toni Collette is barely there with minimal lines and mostly sits at the dinner table with Nat Faxon, also in a nothing part. Kathy Bates is fiery, funny and true in a way she always is and delivers a poignant, stingingly honest speech as Pearl's lesbian cousin Lenore, while the wonderful Sandra Oh is left untested as Lenore's partner Susanne. Finally, Dan Aykroyd, always a welcome face, gets one scene to flip someone the bird as Tammy's father.

Any movie that begins with The Outfield's '80s jam "Your Love" is already on our side, and the rest of "Tammy" works if you meet halfway with it. We know 67-year-old Susan Sarandon would be more believable as a mother than a grandmother to 43-year-old Melissa McCarthy, but that's something you just accept. As a director, Falcone's timing isn't always on, letting verbal riffing going past its expiration dates (i.e. McCarthy and Sarandon singing The Allman Brothers' "Midnight Rider" falls flat). Laugh-wise, this one has its share, even if not all of them land, and nothing is ever too mean or schmaltzy when the darker issues and emotions feel imported from a different movie. A pure heart also offsets some of the wacky jet-ski and automobile slapstick. McCarthy constantly holds up the film's proverbial pants and keeps it humming along, so fans who want to see the star do her shtick will be glad "Tammy" exists. It's never quite "Thelma & Louise," but most things aren't.