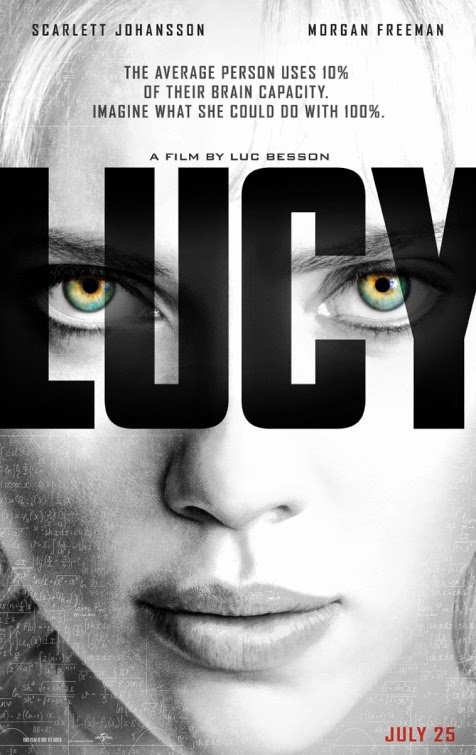 From the advertisements promising Scarlett Johansson as an intellectually endowed sort-of mutant with a gun, "Lucy" could have fared less well as a frilly, junky actioner with no delusions of grandeur. Instead, French writer-director Luc Busson (2013's "The Family") decided to make a more ambitious picture that could be taken as an infinitely better version of this year's poorly executed "Transcendence" with a recalling of the 2011 Bradley Cooper-starrer "Limitless." With a pouch of "Crank," the ticking-clock energy of "Run Lola Run," the mind-blowing screen-saver origami of "Inception," and the cosmic scope of "The Tree of Life," too, "Lucy" even goes so far as to marry the alternately challenging and accessible sensibilities of Johansson's recent career moves ("Her" and "Under the Skin" being the particular connective tissue) with Besson's like-minded "La Femme Nikita." It's flashy and fanciful, trim and slick, and of little substance, but the viewer can either accept the delirious ridiculousness of it all and have fun, or reject it and be a fun sponge.

Living in Taipei, regular 25-year-old American girl Lucy (Scarlett Johansson) finds herself roped into a shady deal gone wrong when her week-long boyfriend Richard (Pilou Asbaek) handcuffs her to a briefcase and makes her deliver it to a gangster named Mr. Jang (Choi Min-sik, the original "Oldboy"). As it turns out, Lucy is the lone woman of other drug mules needed to unwittingly smuggle powerful new drug CPH4 out of the country. The thing is, a package of the blue, powdery drug has been surgically inserted into her stomach, and that means Lucy is about to access the unprecedented other 90% of her brain capacity. Evading Mr. Jang and his henchmen after the CPH4 has kicked in and the normal 10% of her capacity has started to expand, Lucy increasingly gains abilities, like fast-learning and remembering little details from when she was an infant and psychic/telekinetic/shape-shifting powers. Meanwhile, in France, Professor Norman (Morgan Freeman), who has been working on a theory about cerebral zones based purely on hypotheses, comes into the picture to help consult the omnipotent Lucy, but it's not like she needs anyone's help.

Before entering the realm of science fiction and continuously riding the line of awesome and ludicrous, "Lucy" gets off to a sharp beginning. Luc Besson wastes no time throwing us into Lucy's perilous situation and punctuating the urgency by intercutting her confrontation with Mr. Jang with nature footage of cheetahs hunting a gazelle or a mouse going for the cheese in a trap. Some will find this metaphor too heavy-handed, but it's an unusually potent touch. Specializing in hyperkinetic, Euro-schlocky action pictures, Besson creates visual panache and energy to spare with a propulsive techno score, and he's skilled enough to know to keep the shoot-out action fast, clean and exciting instead of hacksawing it into a bumbling, exhausting mess. Dizzy-brained but absolutely never dull, "Lucy" is like an outlandishly over-the-top cartoon with high-minded ideas, and as Lucy is able to access her brain all the way to 99%, it grows loopier and loopier. Just to clarify, there is a dinosaur in here at one point—spoiler!—and the most bonkers "face dissolve" on an airplane that could rival the icky "face peeling" scene from "Poltergeist." Though it might not be as philosophically ruminative as it pretends to be, the film is still exactly as clever as it thinks it is and not just a no-brainer all the time.

This outstanding year for the tireless Scarlett Johansson has been an impressively varied one, starting with her similarly trancelike work in the mesmerizing humdinger "Under the Skin" and then further proof of her physical prowess in the political yet commercially entertaining "Captain America: The Winter Soldier." Here, as the eponymous heroine, she is able to carry one's worry and rooting interest throughout. As regular Lucy, she pulls out the character's palpable humanity with a scared helplessness, especially during an emotional call to her mother, while going through the physical and emotional wringer. At the start, when Lucy checks in with a front-desk hotel clerk who asks for her name, she says, "It's just Lucy." While we glean that she is a student taking exams mentioned in a throwaway line of dialogue, she's just an ordinary woman who may have had a life off the page, but there's no turning back after being thrown into such an unlikely predicament. When she becomes less human without desire, fear or pain, Lucy is a badass specimen with glimmers of humanity still shining through. As for Morgan Freeman, he fulfills his function of setting up the premise at one of Professor Norman's lectures, mouthing exposition and making it digestible for the rest of us.

Ideally getting in and getting out at a breezily paced 90 minutes, "Lucy" is a supremely goofy and grandiose entertainment machine through and through. While science-proving nuts will find it too addlebrained and mainstream audiences hoping for just a female version of "The Transporter" may tune out early from its strange, experimental touches, both camps will be able to meet in the middle by agreeing on the following. It uses its brain by rarely stopping long enough to ponder the inconsequentiality of the bad guys or all of the spatial logistics with time and space. It also might be hogwash, but at least it's fun, cool, stylish hogwash.