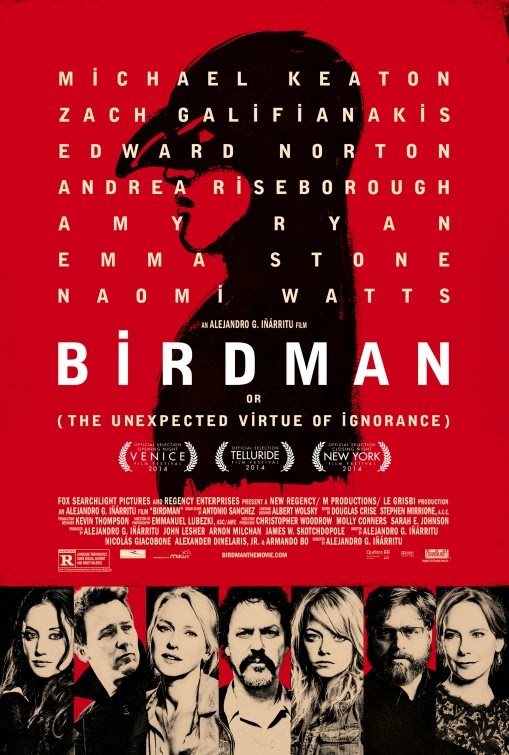 Each year, only a handful of films really evoke a "wow" or blow one away. There is a frisson in seeing a motion picture so original, unclassifiable and rule-breaking that it exhilarates. For 2014, meet "Birdman or (The Unexpected Virtue of Ignorance)." Co-written by director Alejandro González Iñárritu (who has wallowed in human misery with 2003's "21 Grams," 2006's "Babel" and 2010's "Biutiful") and screenwriters Nicolás Giacobone, Alexander Dinelaris and Armando Bo like a work of mad genius, "Birdman" is all at once a backstage dramedy, a showbiz critique of theatre versus explosion-obsessed blockbuster movies, and a character-in-crisis piece conquering an artist's relevance and ego. If any film is bound to earn much-deserved praise among cinephiles, this is it, but there is something to be said for a symphonic, spectacularly mounted fever dream in existentialism that reaches euphoria by always taking chances and making the right ones. If only more films in 2014 could be as alive, vivid, inspired, thrillingly unpredictable, and blisteringly funny of an out-of-body experience.

Hitting it big when he played superhero Birdman a couple decades ago, washed-up actor Riggan Thomson (Michael Keaton) is now an answer to a Trivial Pursuit question. In hopes of being taken seriously in the theater, he is adapting, directing and starring in Raymond Carver's play "What We Talk About When We Talk About Love" on Broadway. It's the first week of previews at St. James Theatre and nothing is going right, externally or internally. When his bad male lead gets conked in the head by a stage light, he finds a last-minute replacement in Mike Shiner (Edward Norton), a brash, grating actor-with-a-capital-A who's sleeping with one of the actresses (Naomi Watts) and turns out to be a loose cannon to the point that he actually gets drunk on stage. Meanwhile, Riggan is having a personal crisis, drowning in self-pity, talking back in his head to the voice of Birdman, and trying not to argue with his acerbic daughter, Sam (Emma Stone), a recently former addict who's working as his assistant. Above all else, the ex-star hopes to leave an impact on the audience, but even a scathing theater critic (Lindsay Duncan) guns for his play, sight unseen.

Sparingly popping with delusions and magical realism without becoming as overblown as the blockbusters it takes jabs at and self-referential about actors, writers and critics without becoming smug, "Birdman" constantly blurs the line between art and madness, the critical real world and the surreal. When we first meet Riggan, he is seemingly levitating in front of his dressing room window, the light streaming through and all of the dust particles flying through the air. He is either talking to himself in a husky growl or hearing the voice of his alter ego, Birdman (which sounds an awful like Keaton's own Batman); it's the latter. As the pressure is on, Riggan also might gain telekinesis when he's alone. When asked about turning down "Birdman 4," Riggan has no regrets, even if he has devolved into obscurity. Michael Fassbender and Robert Downey Jr. are even name-dropped for being unavailable and involved in million-dollar budgeted franchises, and when Riggan's ex-wife Sylvia (Amy Ryan) drops by, she comments on his career low point — "that ridiculous comedy you did with Goldie Hawn."

In a meta wink at his real-life status, an acting veteran who once played the first Batman on the big screen and has since faded into a lot of two-bit supporting roles, 63-year-old Michael Keaton truly makes a return to form. As Riggan Thomson, this is nothing short of a great comeback role and a rich, powerful and challenging performance. Like Riggan himself, Keaton goes for broke, as if this is his career culmination for a be-all, end-all performance, and he etches an occasionally unlikable character with empathy. On the entire ensemble's part, "Birdman" is an acting tour de force, proving there are no small parts, just small actors. More than holding her own with her seasoned fellow thespians, Emma Stone proves she's ready to take on even meatier, edgier roles with her outstandingly raw work here. As Riggan's damaged daughter and gofer assistant Sam, she essays a cynically minded young woman who's the voice of reason for her father when it comes to irrelevance and lack of social-media savvy, but she has her own issues, being newly released from rehab and getting her adrenaline by hanging out on a ledge of the theater roof. Not having a role this juicy in a while, Edward Norton takes the piss out of his reputation as arrogant, very actorly actor Mike Shiner. Everyone else makes a memorable, sharply drawn mark: Naomi Watts, as desperately focused Broadway actress Lesley who's afraid she hasn't made it yet; Andrea Riseborough, as vulnerable actress Laura who might be having Riggan's baby; and Amy Ryan, as Riggan's understanding ex-wife Sylvia who still loves him but can't live through his volatility. Even Zach Galifianakis might be funnier when he's allowed to be subtle and controlled, here as Riggan's best friend and producer-cum-lawyer Jake; just listen to the way he mispronounces "Martin Scorsese." Lindsay Duncan is also just right as scathing New York Times critic Tabitha Dickinson who loathes Riggan so much that she's hell-bent on writing him the worst review.

All of the elements collectively make "Birdman" what it is: a cinematic blessing. The film is made to look mostly like one mesmerizing continuous take, but that technical illusion never comes as a gimmicky trick that calls attention to itself because the story isn't told in real time, as we jump ahead before and then well into the preview performance. Knowing his way around a high-wire act, Emmanuel Lubezki's (2013's "Gravity") virtuoso cinematography flows fluidly, immersively and hypnotically through time and space, on and off the stage, down narrow corridors and into dressing rooms to eavesdrop on the actors, down from the rafters and onto the stage, and from the theater and through Times Square. It's dizzyingly grand and then, with the use of a the wide-angle lens, brings a potency to the more intimate scenes. Antonio Sanchez's music score is key, too, with a jazzy, percussive drum-solo thrumming throughout in both diegetic and non-diegetic ways that are both clever and edgy. Just like the characters who aren't exactly simple, lovable types, the film refuses to sit still, underscoring the overall jitteriness with Lubezki's roving Steadicam. Alejandro González Iñárritu's "Birdman" is pretty relentless in its movement, but it is a gloriously lunatic, inventive, intoxicating triumph of volatility in filmmaking and gives audiences plenty to take home and discuss. An indescribable art title with a little mainstream potential from such a uniformly excellent cast, this is a piece of work not to go unseen or be easily shaken off.