Don't Enter at All: "The Pyramid" a useless junk hole 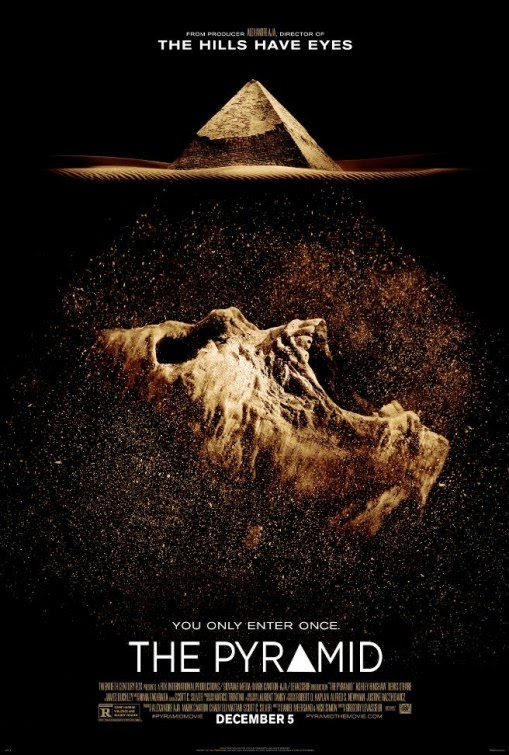 It's at once amusing and depressing that 20th Century Fox even bothered to release—nay, dump—the horror film "The Pyramid" around awards season on a small 500-something screens for less discerning crowds. Though reduced to producer here, horror maven Alexandre Aja has been fully capable of reinvigorating horror remakes with 2003's "The Hills Have Eyes" and 2010's "Piranha 3D" when he's at the helm. Now, Aja's regular writing partner Grégory Levasseur (2013's "Maniac") makes his directorial debut with "The Pyramid," and even as an alleged original property, this cheap, musty horror adventure-thriller feels the most mummified of the lot. Imitative of 2006's harrowing, claustrophobic spelunking nightmare "The Descent" and August 2014's surprisingly effective Parisian catacombs-set "As Above, So Below," or anything, really, set in a cave, the film has no other pretense than to scare. However, it fails on all counts, unless it was trying to be dull and idiotic by design.

Like everything else as of late, the film purports to be real footage. In Cairo, Egypt, 2013, a small documentary crew that includes on-camera talent Sunni (Christa Nicola) and cameraman Fitzie (James Buckley) follows father-daughter archaeologists Holden (Denis O'Hare) and Nora (Ashley Hinshaw). A three-sided pyramid is uncovered deep beneath the sands, but a pix-axe crew member is infected with a cloud of toxic gas. When the project's funding gets pulled due to the riots in the streets of Cairo, the team decides to send in their camera-equipped rover robot named "Shorty," courtesy of tech assistant and Nora's lover Zahir (Amir K), into the tunnels of the pyramid so their discovery isn't all for naught. Alas, something attacks "Shorty" and the five of them risk going into the labyrinthine tunnel to retrieve the equipment. They've come thisclose in their discovery, so why cut the excavation early when they can get trapped and die one by one?

"The Pyramid" has been written by Daniel Meersand and Nick Simon, but every line of dialogue comes from the Found-Footage Playbook, as insipid as "Did you guys hear that?" and "Don't look back!" to howlingly stilted as something like, "Stop being an archaeologist for one minute and start being a human being!" Yikes. It doesn't help that the performers are saddled with such lightweight, unbelievable pawns to play and make deductive, "The Da Vinci Code"-style assumptions once in the pyramid. Even after three deaths, characters still laughably feel the need to spew "interesting" Egyptian history and translate hieroglyphics that warn them to stay away. What exactly did anyone see in this junk, particularly Denis O'Hare (TV's "American Horror Story" and 2014's "The Town That Dreaded Sundown" remake) and Ashley Hinshaw (2012's "Chronicle")?

Archaeologists getting trapped in an Egyptian pyramid is ripe for horror territory, with or without the found-footage format, but "The Pyramid" is rote and generic in almost all facets. Director Grégory Levasseur comes close to effectiveness in set-pieces involving a sand trap and a spiked floor, but everything else is an egregious waste of time and resources. CG-ed Sphynx cats scamper past the camera. Obnoxiously loud music cues the viewer to quake in fear. A quiet, dimly lit sequence with the present survivors huddling in a corner of a tomb would seem to build to something that would trigger a scare, but no, it just makes one squint. Inconsistent found-footage rules aside (the first-person format is only really used when needed for an attempted shock), the filmmakers should be most ashamed of Anubis, a shoddy-looking jackal-headed god monster they end up unleashing, when an actor wrapped in toilet paper might have proven to be creepier.

Even if it didn't end on such an unsatisfying note with three lame endings, this is still amateurish, crummily made schlock with studio-approved duds that could have waited to open cold in the graveyard of January. Since a genre movie of this type solely relies on who lives and who dies, it's hard to care when there is such nondescript character development and little to no tension to be found. A couple of jolts will make the viewer jump by default, but those occasions are rigged with as much inspiration as something dropping out of the sky or a spooked kitty cat jumping out of a closet. The film at least knows brevity with an 89-minute running time, but that would only be a plus if anything in those minutes was scary, imaginative, or the least bit memorable. "The Pyramid" might just be this year's worst theatrical horror release, deserving to be sealed in a sarcophagus and never found for moviegoers who deserve so much better.