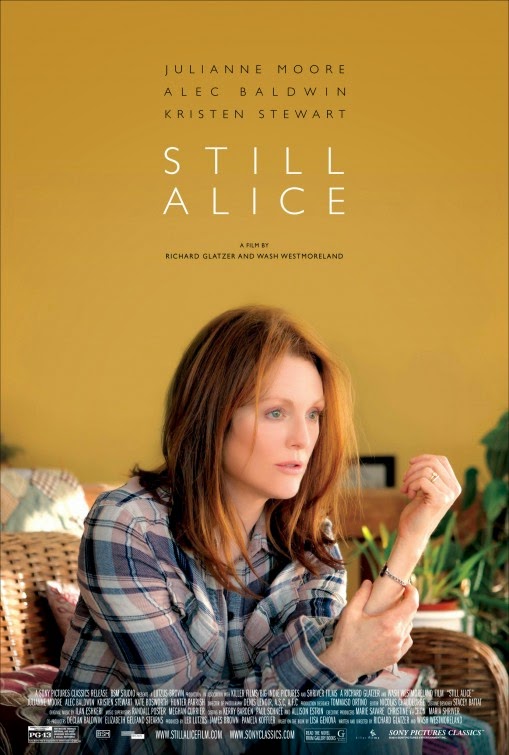 An adaptation of Lisa Genova's 2007 novel, "Still Alice" is most notable for Julianne Moore's astonishing portrayal of a middle-aged woman dealing stricken with early-onset Alzheimer's disease. Writer-directors Richard Glatzer and Wash Westmoreland (2013's "The Last of Robin Hood") carry a sensitivity and an earnest but aching tone. It is easy to see how "Still Alice" could have crossed over into a maudlin or melodramatic disease-movie du jour on Lifetime, but it never does from a couple of differences. Those differences come from Moore and that the film takes the married writing-directing partners' personal journey to the screen. In 2011, Glatzer was diagnosed with ALS before he and husband Westmoreland adapted Genova's novel. During principal photography, Glatzer's condition worsened, lending an added poignancy to a film handling a similar degenerative illness.

Julianne Moore plays esteemed, accomplished 50-year-old Colombia University linguistics professor Dr. Alice Howland. She seems to have it all: a bourgeois family, including husband Dr. John Howland (Alec Baldwin) and three children, lawyer daughter Anna (Kate Bosworth), doctor son Tom (Hunter Parrish), and youngest daughter Lydia (Kristen Stewart), a willful aspiring actress living in L.A., and a Manhattan brownstone. Days after celebrating her 50th birthday, Alice goes for her daily jog around campus and suddenly feels disoriented, lost even. Soon, a visit to a neurologist reveals Alice is experiencing symptoms that point to early-onset Alzheimer's disease, a rare familial type that could affect her children. She tries to keep her short-term memory sharp, but eventually, there's no way to mask it. When Alice and her husband get away and stay in their beach house, Alice can't find the bathroom. It can only get worse from there, but she is still Alice.

The idea of a tenured communications-department professor losing memory of words would seem way too on the nose. However, "Still Alice" educates and resonates as a compassionate, delicately handled and powerful character drama. Filmmakers Richard Glatzer and Wash Westmoreland face Alice's cognitive deterioration head-on, but Alice is still always treated as a human being rather than a self-pitying martyr. She still doesn't agree with daughter Lydia's dreams of being an actress. At one point, Alice even says to her husband, "I wish I had cancer. I wouldn't feel so ashamed," and she isn't above plotting her own suicide. First and foremost, this is a showcase for the lovely, chameleonic Julianne Moore, who is simply exquisite, emotionally naked and heartbreaking, shattering and subtle. In all of her candor, this is a dramatically small performance, where the choices always seem right, from the memory loss, the embarrassment, the discouragement and the confusion. Alec Baldwin is also strong as husband; the way he's written never paints him into a corner. He's supportive yet frustrated. Empathetic as wayward daughter Lydia, Kristen Stewart hasn't been this unaffected in a while now that she's through playing Bella Swan, and how she responds to her mother's condition rings both true and surprising.

Never fully manipulating, finding no use for sentimentality, nor extending itself to get an emotional response, the film is just moving. With beautifully understated direction, true writing and, of course, Moore's fearless, deeply empathetic performance, "Still Alice" strikes a tough but sensitive chord that reverberates longer than any manipulative TV movie on the same subject ever could. Denis Lenoir's cinematography and Ilan Esherki's score are also worth noting, denoting Alice's blurry look at the world. It's also a reminder that Moore really is one of cinema's finest, most intuitive actresses who's clearly incapable of hitting a dishonest note. Coming as no surprise that she's already earning raves for her work just in time for Oscar consideration, Moore doesn't just play Alice; she lives inside of her.