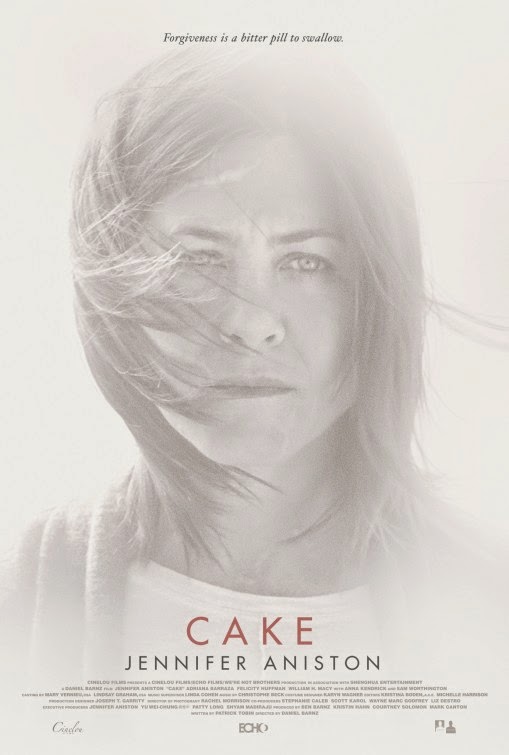 Like Julianne Moore in "Still Alice," Jennifer Aniston received much praise for her performance in her film being released for an Oscar qualifying run. Unlike Moore, she lost out on a nomination. Her dolled-down, vanity-free turn in small-scale drama "Cake" is not a revelation, a word that would hold true had the actress never shown interesting, complicated shadings beyond the forgettable romantic-comedy vehicle she so often headlined in the past. Aniston has already showcased her capabilities of conveying unvarnished honesty in meaty, astutely written roles, like in 2002's "The Good Girl" and 2006's "Friends with Money," and she returns to more dramatic terrain with aplomb. Occasionally more drab than insightful, "Cake" takes its sweet time getting to the humanity of the damaged lead character, but Aniston's against-type performance is the most satisfying piece of the film to be worth talking about.

Los Angeles native Claire Bennett (Jennifer Aniston) experiences chronic back pain and numbs her emotional pain with wine and extra painkillers under the nose of her kindly caregiver, Silvana (Adriana Barraza). She's depressed and scarred, both physically and emotionally. Whenever she's driven, she has to lay down in the backseat or recline the passenger's seat. Once forced out of her support group for her unpleasant remarks and attitude by group leader Annette (Felicity Huffman), Claire starts dreaming about the ghost of group member Nina (Anna Kendrick), who ended her life too soon by jumping off the overpass over Interstate 105. Under false pretenses, Claire goes to Nina's home, only to meet her English husband, Roy (Sam Worthington), with whom she eventually befriends. Eventually, though, Claire will have to face her pain head-on if she wants to move on with her life.

Such heavy issues as loss, pain and suicide are not what one could call "uplifting," and though the treatment of this subject matter is far from sentimental, it's not completely oppressive, either. With Patrick Tobin's patient script being unobtrusively directed by Daniel Barnz (2012's "Won't Back Down"), "Cake" is tonally somber but never without specks of natural, acerbic humor, courtesy of Claire. She is foul-mouthed, abrasive and cynical, against anything religious and making light of Nina's suicide at her support group. Claire is not innately likable and not all that rootable at first, and the film is unapologetic about her behavior for a long time. Little by little, however, we gather character information about Claire since she, herself, does not want to remember the tragic event that took place. What put her into her current state of physical and emotional pain? What else did she lose? What was her job that she can still afford a nice home and the help from Silvana? None of these questions are spelled out in big, story-stopping ways, a few of them even mentioned in pieces of throwaway dialogue. This sort of storytelling approach is a double-edged sword, both frustrating but also keeping the viewer engaged.

With bodily scars, tired eyes, and a generally unglamorous attitude, Jennifer Aniston feels like she is lived-in as the screwed-up Claire, who bottles up her heartbreak but remains hostile to those around her, rather than acting. One eventually forgets he or she is watching the instantly likable former "Friends" star. Adriana Barraza is not to be outdone, however, as she is a beacon of warmth and strength in playing Claire's caregiver-cum-housekeeper Silvana. This is her film just as much as it is Aniston's. It is almost a testament to the character of Silvana that we soon come to care about Claire; the scene where Claire saves Silvana when running into formers friends in a Tijuana, Mexico restaurant is a small little victory. Usually asked to be a stoic action/fantasy hero, Sam Worthington offers one of his better performances as an actual human being, even if he's given less to do than the film sets up. His Roy is understandably angry about Nina leaving both him and his son Casey (Evan O'Toole). The handling of Claire and Roy's relationship seems unfinished, but the direction the script takes it in is still a refreshing change. On the part of Anna Kendrick, she haunts the proceedings as suicide victim Nina, seen as a smiling hallucination to Claire, and actually gives the film an eccentric levity. The talent occupying the supporting roles is also plentiful, including Chris Messina, as Claire's estranged husband Jason; Felicity Huffman, as uptight support group Annette; Mamie Gummer, as Claire's frustrated swim therapy instructor; Lucy Punch, as Claire's chipper doctor; and William H. Macy, as the catalyst of Claire's pain.

Rebuilding one's life is not as easy as baking a homemade cake with fudge frosting, nor does this film see it that easily, but it's a start. Most of all, Claire's struggle feels so true, and her arc feels organic and hopeful. Ending in a spot that's simultaneously perfect and open-ended, then joined by a beautifully preferable cover of Beyonce Knowles' "Halo" by Snow Patrol lead vocalist Gary Lightbody to play over the end credits, "Cake" ultimately resonates with Jennifer Aniston as the sour, emotionally raw center. Even as many cynics will see the film as the actress' bid to get noticed for awards and to be taken seriously, her performance really is worth noticing and warrants her to be taken seriously. She takes a chance with this material, and it would be nice to see Aniston take on projects more this speed instead of always playing it safe as the appealing leading lady.