Better Late Than Never: Despite Collins and Claflin's charm, 'cute' isn't quite enough in "Love, Rosie" 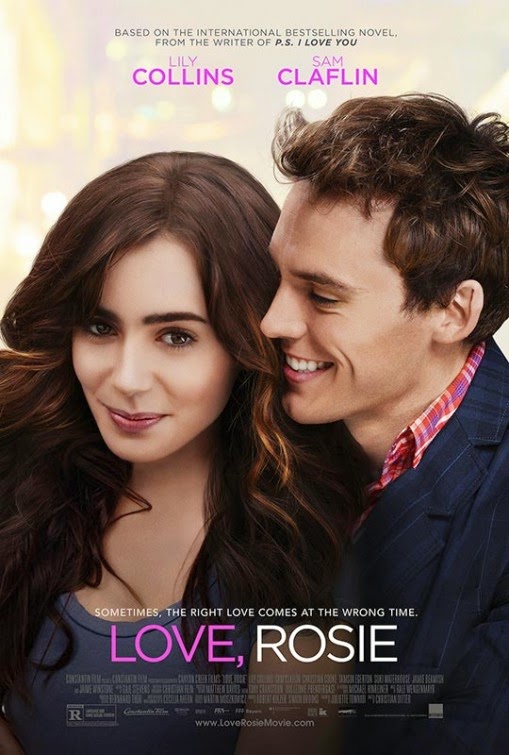 Based on Cecelia Ahern's novel "Where Rainbows End," British romantic dramedy "Love, Rosie" falls the way of so many other entries in the genre, which has been homogenized and in hand-me-downs since its commencement. Romantic comedies typically go about it in two ways — He and She either despise one another at first sight but come to love each other, or He and She just don't know it yet that they're made for one another but, don't worry, they will. This film follows the latter scenario, as manufactured, dramatically invalid situations always stand in the way of our two lead lovebirds, and the conclusion is foregone and never in doubt. However, Lily Collins and Sam Claflin are so infinitely appealing, separately and together, that they make "Love, Rosie" more palatable than it has a right to be.

Rosie (Lily Collins) and Alex (Sam Claflin) have been the bestest of friends since they were five years old. On Rosie's 18th birthday, they share a slow kiss before she drunkenly passes out and has her stomach pumped. They plan to go as dates to the high school dance, until both are asked out by someone else or do the asking out. Rosie has a condom mishap with her hunky dunce of a date, Greg (Christian Cooke), while Alex ends up losing his virginity to flirtatious blonde Bethany (Suki Waterhouse). Rosie gets accepted to Boston University— or, because the film never seems to know, is it Boston College?—but a pregnancy holds her back, and Alex gets a scholarship at Harvard. Aside from the occasional text message, they fall out of touch. They are both dealt such rough hands in life that they should have gotten together from the beginning. One waits for the other, while the other seemingly has their life all figured out. This goes on for two decades, and with two decades come weddings and funerals, where Rosie and Alex are always there for one another. You just want to put these two together in a hotel room and tell them to get it over with.

Directed by Christian Ditter and written by Juliette Towhidi, adapting the source material, "Love, Rosie" is not unlike 2011's "One Day," tracking two British friends (played by Anne Hathaway and Jim Sturgess) who see each other once a year but can't admit to themselves that they're soul mates. The problem with Rosie and Alex is that they keep kidding themselves and hold off lies to not hurt the other. Rosie tries to make a relationship work with her daughter's father, and Alex keeps going for leggy models who are either vapid or overbearing. Somehow, Rosie fails to mention to Alex that she was pregnant for nine months (bollocks!). Then, Alex fails to tell Rosie that he's still with his snooty, type-A girlfriend, Sally (Tamsin Egerton) and they have a kid on the way! Though these characters' trivial problems are delayed to be saved for the overextended denouement, the characters seem too intelligent that they deserve more credit than what the script forces them to do. Eventually, you just want to shake both Rosie and Alex to knock some sense into them.

Rom-com signposts abound. Rosie and Alex's present partners are clearly not Mr. Right or Mrs. Right. Honest love letters are hidden from the correct recipient. There's an amusing sex scene where the condom goes missing, but a later gag—Rosie must race young daughter Katie to school while lugging around her headboard, due to a missing key to the handcuffs used by her local-cop fling—is just lame. The soundtrack is a poppy one, including Iba's cover of "I'll Never Fall in Love Again" and Lilly Allen's "Fuck You," but it often seems a pop song exists just for the heck of it, even if it doesn't fit, or it's just too on-the-nose. Salt-N-Pepa's "Push It," when Rosie gives birth to her baby girl, is an example of the latter. Because of the two charming actors, the film is occasionally likable, but too irksome and antiquated to be utterly adorable. As Rosie and Alex, Lily Collins has a lovely, winsome presence, and the handsome, dimple-cheeked Claflin could be his generation's Hugh Grant. A photogenic match with decent chemistry, they have a few nice, sweet moments together.

When Rosie and Alex are together, the right person for each of them is right in front of their noses. She knows it. He knows it. The audience knows it. Beatifically photographed with gorgeously dreamy lighting, "Love, Rosie" has its modest charms, but it's only passable to carve out a memorable spot for itself. As said above, Collins and Claflin make the most out of the most tried-and-true formula in the book, and Jaime Winstone (Ray's daughter) shines in the obligatory role of Rosie's saucy gal pal Ruby, who's there for her through thick and thin but never at a loss for a bon mot. That there's a comfortable safeness about "Love, Rosie" isn't entirely a bad thing; just don't expect much effort to shake things up, either.