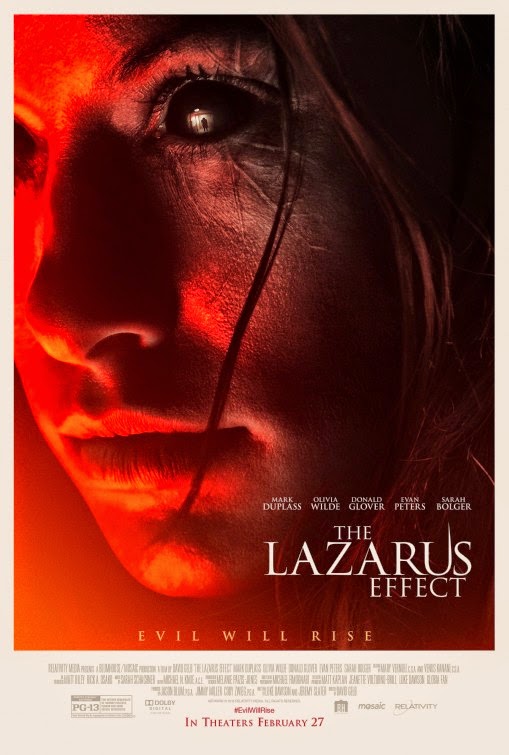 The intriguing concept of bringing the dead back to life has stood the test of time, but the most recent example of that concept will not. The slickly produced but unhorrifying "The Lazarus Effect" just feels like wasted potential. A redux of "Re-Animator," "Pet Sematary" and "Flatliners" that breeds with "Carrie," "Hollow Man," and last year's "Lucy," this science-run-amok morality horror-thriller uncommonly begins with something on its mind and deceives those watching into thinking it will sustain its intelligence for the long haul. By the time the film goes the way of a basic slasher movie, and a dumb one at that, "The Lazarus Effect" has set the audience up with false hope and underestimates itself. It's no longer curious in asking anything of us besides jumping back in our seats when the lights go out and someone sneaks into the background of the frame.

At a university lab in Berkeley, California, Dr. Frank Walton (Mark Duplass) and his rosary-wearing, nightmare-having fiancée, Dr. Zoe McConnell (Olivia Wilde), head a grant-funded project with college grad researchers Niko (Donald Glover) and Clay (Evan Peters) and have recently taken on videographer Ava (Sarah Bolger) to shoot their progress. They have moved on from trials with coma patients to dead pigs, and with a serum and volts of electricity, they are able to reanimate a canine test subject named Rocky. His cataracts is now gone, but he has no appetite and his behavior is strange and aggressive (yes, there's a "Cujo" reference). Once the project gets shut down by a shady drug company, the team decides to sneak back into the lab after hours for a duplicate experiment that doesn't go as planned. Zoe gets electrocuted and dies, but Frank revives her, against the others' better judgment. What on God's green earth could go wrong when playing God? Her neural activity is operating on 100%, which accounts for her telekinesis, telepathy and deadly aggression, and no one else stands a chance getting out of the lab and getting out alive. Just because Zoe can be brought back doesn't mean she should have been.

Documentary director David Gelb (2012's "Jiro Dreams of Sushi") makes his fictional narrative debut with a script by Luke Dawson (2008's "Shutter") and Jeremy Slater, and "The Lazarus Effect" might have been a better film with a consistently smarter and less sloppy script. Kicking off with an icky, great-looking credit sequence of pulsating organic tissue, the first act is absorbing enough, introducing types who at least feel like real people and then seeming interested in posing religious and moral questions of death and resurrection. So far, not bad, despite two unnecessary jump scares before Zoe even flatlines. Once the fatal accident does happen and our characters cross the line, the film begins to feel rushed and the wheels proceed to come off. The viewer still hangs in, even if it never ventures into more daring, provocative, or unsettling territory, and then director Gelb starts pulling out the oldest tricks in the book. The power goes out and lights flicker, so characters can yell, "Where is she?! Where is she?!" Characters are separated, so one can be killed (and the underground lab isn't even that big). A set-piece in the morgue is disappointingly cut short. Most of the jumpy startles are timed on predictable editing beats, and the barely coherent finale brings out ineffective, fakey CGI that would look more appropriate in the "Silent Hill" movies. By the end, the filmmakers might have intended for the last shot to be a delightfully nasty reversal of "Bride of Frankenstein" and a sequel setup, but it's just lame.

Besides conceptual promise going for it, the film also boasts an appealing, qualified cast, but there's no visible reason why any of them signed on in the first place. Olivia Wilde plays creepy well enough and effectively gives cold, evil stares in the film's flashiest role, but then the black contact lenses go in once the soulless Zoe raises a little hell. Out of the indie scene, Mark Duplass is always a likable presence, uttering psychobabble convincingly here. Donald Glover and Evan Peters have diddly-squat to play, stranded with barely written characters who have names and one trait apiece (respectively, Niko has a crush on Zoe and Clay likes to smoke his electronic cigarette) but are just fodder for Zoe's eventual rampage. After having very few lines and only having to react in the first half as Ava, the fresh-faced Sarah Bolger later achieves "final girl" status but still has an underwhelming amount to do other than walk around with a flashlight.

A film doesn't direct itself, of course, so director Gelb and cinematographer Michael Fimognari ("Jessabelle") do pump up a few sequences with some creepily stylish lensing, particularly a sequence in a burning apartment building hallway that stems from Zoe's traumatic childhood memory. However, even that plot point feels too sketchily conceived to satisfactorily explore the mysteries of death and Zoe's version of Hell on a loop. There are clearly higher aims here, but designed out of the low-budget horror-centric Blumhouse Productions machine, the film ultimately reveals itself to be a vehicle out to make a quick buck, targeting teenage moviegoers who won't have to show their I.D. at the door. Unfortunately, it's more "Ouija" than "Insidious." At an efficiently paced but nevertheless undercooked 83 minutes, "The Lazarus Effect" isn't entirely bad, but it's cool for the ideas it initially flirts with rather than for what it ends up being. It's a B-movie that very rarely jolts itself to life.