DVD/Blu-ray: Both sets of leads almost lift "The Best of Me" out of the sap 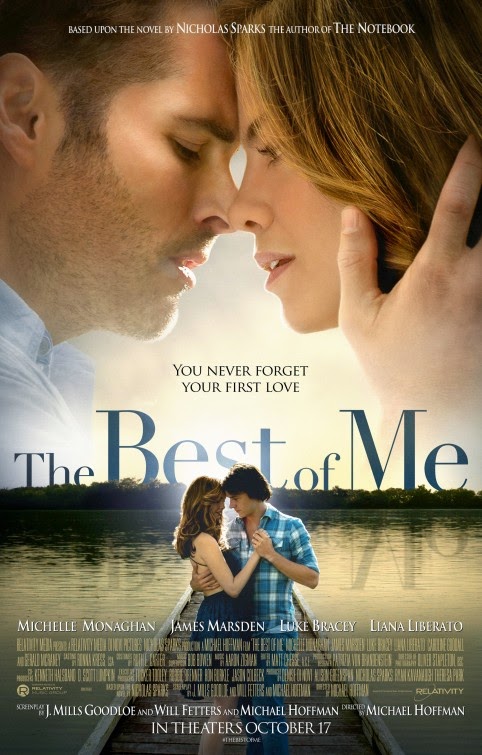 This being a Nicholas Sparks joint, someone has to fall in love and then, more or less, be punished for it. The ninth adaptation of a beach read by Sparks, "The Best of Me" will likely please the demo who is fine with knowing what they will get at face value and don't mind being fed schmaltzy, all-too-familiar convention. Notice how shamelessly one in the same the one-sheet for this recent entry is to "The Notebook," "Nights in Rodanthe," "The Lucky One" and "Safe Haven," and there you have it. While the material bathes in cornball cliché most of the time, as if director Michael Hoffman (2002's "The Emperor's Club") and screenwriters J. Mills Goodloe and Will Fetters had their checklists out, the actors almost rise above the sap, almost being the key word here. One is just left wondering who in their right mind would want to be like the two star-crossed lovebirds because they all suffer at the hands of the evil plot machinations, even if it's not always one of them being hurt directly.

After falling one-hundred feet into the water from an oil rig accident, Dawson (James Marsden) is lucky enough to survive. His former love, Amanda (Michelle Monaghan), now lives in Baton Rouge with her unsupportive workaholic-cum-alcoholic husband (Sebastian Arcelus) of eighteen years and a son (Ian Nelson) about to go off to college. When Dawson receives the news that his surrogate father, Tuck (Gerald McRaney), has passed away, he returns to his Louisiana hometown, only to be reunited with Amanda who helps him clean out Tuck's cottage and spread his ashes. It's been more than twenty years since they last saw one another. She's standoffish at first, but he genuinely wants to know how she's doing. Clearly, they have a past together that neither can let go, but what tore them apart? More importantly, does Amanda still feel the same way about Dawson as he does about her? Were you born yesterday?

Flitting back and forth between both timelines—the early 1990s and 2014—the film hits upon every gushy chestnut that has grown out of every story by Nicholas Sparks. Dawson (Luke Bracey) was the nice boy from the wrong side of the tracks with a violent father (Sean Bridgers) holding him back. He was good with his hands, but shy when it came to flirting with a girl. Rich, smart, privileged Amanda (Liana Liberato) was tired of seeing jerks, and she had the rest of her life all planned out, going to college and hopefully becoming a lawyer. How all of this plays out will only shock those who have yet to experience a soapy melodrama. Would you even guess that Amanda's bribing father looks down upon Dawson for not being subjectively good enough for his daughter?

Even if the film itself is only worthy of a shrug, the performances are more than just on-par for this sort of thing. It helps that Michelle Monaghan is almost always a smart, sunny savior in a bland (2008's "Made of Honor") or wretched (2007's "The Heartbreak Kid") feature film, and she elevates the material above being another example of the former. As good as Monaghan is playing Amanda, she's also matched by Liana Liberato, the young lady playing her counterpart. Though it's no fault of James Marsden and Luke Bracey, respectively playing the 39-year-old and 18-year-old versions of Dawson, part of the problem resides with this miscasting. Both are good-looking men, sure, but would it have killed the casting directors to make sure the younger and older counterparts at least matched up? Bracey does a nice job in communicating an internal battle as Dawson, and vice versa for the reliably affable Marsden, but as portrayed by the 25-year-old Bracey, Dawson would more likely grow up looking like Christian Bale. Unless Dawson had facial reconstructive surgery, the casting choice continually takes one out of the romance we should be rooting for all along. And, as Tuck, the gun-toting widower to stand as a father figure to young Dawson and the glue bringing Dawson and Amanda together, Gerald McRaney is the touching epitome of support.

Pleasantly watchable but generic and secondhand all the same, "The Best of Me" has little to show for itself once the manufactured plot feels the need to overstuff itself right until the end credits. The film certainly has some ear candy from the use of recognizable '90s tunes, and it's attractively photographed in Louisiana, capturing typical imagery like a woman reading a letter on a swing, lovers nestling in a tree, and lip-locking in the rain. However, whenever things are staying afloat, a cornball line of dialogue will be uttered, like "You want me to fall back in love with you. How do I do that if I never ever stopped?" or a ridiculous final twist rears its swollen head. Also, the one-note, broad-brush villains of the piece, Dawson's abusive father and his idiotic cronies, are like mountain-man refugees out of a backwoods-horror film that it wouldn't be out of character for one of them to say, "Boy, you got a real pretty mouth." One shouldn't be discouraged to see a beautiful romance about lost love and destiny, but "The Best of Me" is hardly the best out there.