OK, Everybody Out: "Hot Tub Time Machine 2" drowns in its own unfunny laziness 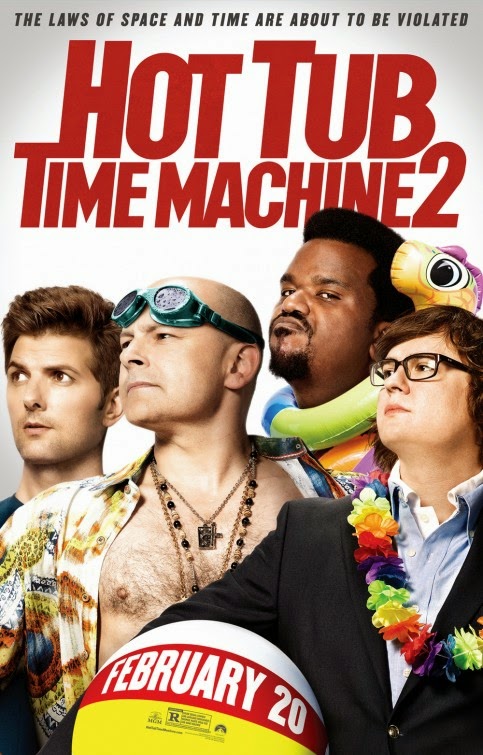 A party can be fun, until it's not. It's not like 2010's "Hot Tub Time Machine" was an '80s-nostalgia documentary, nor was there anything deep and introspective to think about after its runtime. With an on-the-nose title that slapped together heated relaxation and time traveling, it was just a goofy, dopey comedy with enough clever, funny moments and a comedically strong cast to make it fun. Five years ago, it'd be hard to imagine anyone thinking there would be more to add, but here we are with a "Hot Tub Time Machine 2," a sorry sequel with none of the predecessor's appeal and an even sorrier excuse for a raucous R-rated comedy. Money might talk, but returning director Steve Pink (2014's "About Last Night") and Josh Heald, one of the original film's writers, shouldn't have bothered and just left the goofball farce alone. Obviously, director Pink just let his actors go for it and probably hoped for the best. This isn't their best.

If "Hot Tub Time Machine" was "Back to the Future," plot-wise mind you, then "Hot Tub Time Machine 2" is "Back to the Future Part II" with dick and gay-panic jokes, psychotropic humor, and a breaking of the fourth wall. The dreary, no-stakes story catches us up to speed after our heroes reset history. The obnoxious, substance-abusing Lou (Rob Corddry) is now a rock god and creator of search engine "Lougle," married to his sweetie, Kelly (Collette Wolf), and having son Jacob (Clark Duke) working as his butler. Nick (Craig Robinson) is a chart-topping musician, ripping off others' already-memorable songs to call his own but having marital troubles with his wife (Kellee Stewart). Adam (John Cusack, only seen in photos) is on an "experimental journey" and never to be heard from by his buddies. Right before Lou makes his grand speech at his mansion party, he is shot in the crotch. For convenience sake, Lou stole the hot tub time machine from the Silver Parks Lodge, so Jacob and Nick hurry and get his bleeding body into the tub and use a vile of nitro to whip it into time-traveling shape. Waking up in 2025, the trio walk into an alternate universe and try to find the man who tried to murder Lou.

Unfathomably, a movie simply titled "Hot Tub Time Machine 2" can't even do the simple job of keeping the laughs flying. As crass and juvenile as it gets, it's just not subjectively funny or ever sweet, two things "Hot Tub Time Machine" had no trouble being. It is, however, a desperate, depressing, mean-spirited 93-minute time-stealer that slows down time and overcompensates with movie references ("The Terminator" and "Looper" are just two). Problem: the clever-o-meter rarely comes close to the MGM lion's "hmm?" growl at the sound of a vibrating phone. The few comedic highlights in the actual film come early in a quick recap of some of the characters' present-day successes. Nick is a musical sensation, making hits like "Smells Like Teen Spirit" (by Nirvana) and "Let's Get It Started" (by The Black Eyed Peas), and then we're treated to a video of his latest, "Stay (I Kissed You)," while Lisa Loeb is stuck as the cat wrangler on set. And, while we're handing out positives, there are some amusing ideas in the 2025-set scenes, like "The Daily Show" correspondent Jessica Williams mentioning Neil Patrick Harris as the new POTUS, or a pug riding around on a hoverboard, but these are just vaguely clever details that remain details. Then the plot proper has to take over.

Besides time-capsule nods to '80s stars and frequent shots of leg warmers, the other fun part about the first "Hot Tub Time Machine" was how it coasted on the strength of its cast. Here, these guys are worse off. Now, Lou is even more coarse and grating and just so repellent compared to before, so the stakes in the story this time around couldn't be lower, much like the film's idea of wit. Rob Corddry can be a wickedly entertaining comedian, who's always to be counted on to let a one-liner rip, and he does some of that here, but Lou is such a toxic, unsympathetic jerk that it's hard to laugh with him and impossible to get behind him being unassassinated. There's even an emotions-driven Smart Car set on killing Lou. Craig Robinson and Clark Duke still have their moments, plus it helps that their characters aren't as despicable. Other times, the ad-libbing gets so out of control when they venture into the alternate universe and riff on Jacob's chic pad ("It's like a Scandinavian gay bar…it looks like a Miami IKEA"), so much in fact that Duke winkingly comments about the repetition needing to stop. The uninvited John Cusack sits this one out, and good for him, while Adam Scott picks up that loss as Cusack's character's son, Adam Yates Jr. He's actually too naïve and oblivious to be the straight-man replacement, so we're left with a group of morons vying for attention. The script also makes the biggest waste of Collette Wolfe and Gillian Jacobs, who's still a delight to see as Adam Jr.'s chipper wife-to-be in spite of the material, and Bianca Haase is never asked to be anything more than a pretty face with a nice rack in the thankless role of a coat-check girl at Lou's party who's also a love interest for Jacob. Oh, and Chevy Chase stops by for three minutes to cameo as the mystical ski lodge resort repairman who talks in riddles.

Way before a character starts foaming at the mouth after a hallucinatory high and two characters have semen sprayed onto their faces, the damage has already been done. There is one painful set-piece that is intended to be a laugh riot. Nick is elected to come on as a celebrity guest on 2025's hit TV show "Choozy Doozy," basically a televised game of "Would You Rather?" (and hosted by Christian Slater) but with the unsavory challenges being selected by the audience. In a nutshell, Nick ends up having to have sex with a man in a virtual-reality sense. Oh, how uproarious and shocking in 2015. Instead of the joke making fun of how television has degraded into a lowest-common-denominator conformity, not unlike Mike Judge's 2006 satire "Idiocracy," the joke merely hinges on homophobia and the implication of rape. Even CollegeHumor would be appalled at its offensively unfunny laziness. Slapdash, unctuous and wearying, "Hot Tub Time Machine 2" is just too much of a numbingly stupid thing. Once the transcendent sounds of Ellie Goulding's "Anything Can Happen" assure us that characters are going to get their happy endings (and no, that's not a double entendre), the film still hasn't found a reason to take another dip, nor has it created many laughs for one to remember it by. Maybe a hot tub should just stay as a hot tub.