"Out of Sight"-lite: "Focus" a slick, glossy diversion that doesn't fool 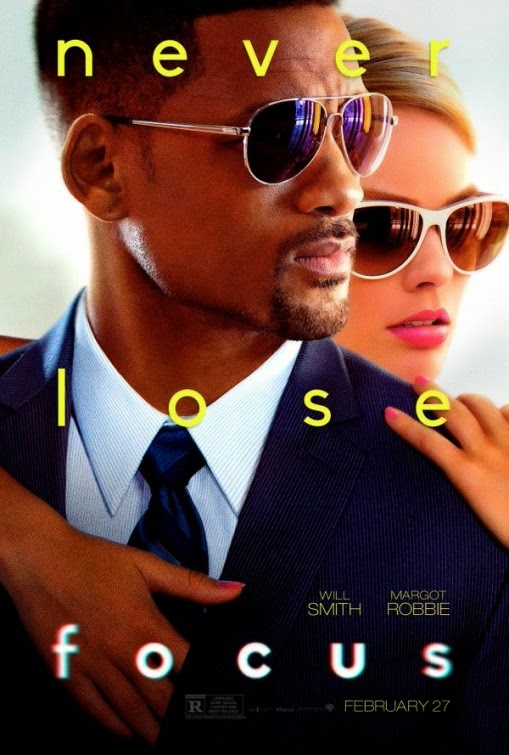 Without being more than it is, "Focus" is a decent diversion. It's not significant or substantive, but it's a pretty movie featuring pretty movie stars who make work look fun and effortless. You can take in the sights, think only a little, and then go home satisfied enough. Writer-directors Glenn Ficarra and John Requa (the "Bad Santa" screenwriters who went on to make 2010's "I Love You Phillip Morris" and 2011's "Crazy, Stupid, Love.") don't patent anything extremely novel for the con-caper genre, but they aim for something sexy and cool, and they succeed most of the time from some occasionally fizzy writing and the playful chemistry between their two leads. The first half is considerably stronger than the last, but before overplaying its hand with a bait and switch and then explaining itself, "Focus" is slick, glossy, smarter-than-it-needs-to-be entertainment that doesn't take its audience for a fool in a bad way.

Nicky Spurgeon (Will Smith) is a seasoned, silky-smooth hustler who has made conning a lucrative trade for himself with a large staff. Then comes along a sexy but less-experienced con artist named Jess Barrett (Margot Robbie), who tries scamming Nicky in a hotel room with her partner posing as her husband. Nicky is way ahead of her, though. Addicted to stealing expensive watches, Jess becomes eager to be taken under Nicky's wing as his "intern." They also become romantically involved, but after she passes the test in New Orleans, Nicky breaks it off. Three years later, Nicky is in Buenos Aires, Argentina, working Grand Prix racing owner Garriga (Rodrigo Santoro). Just as Nicky goes in for a kill, he notices Jess hanging on to Garriga as his arm candy. Is Jess really with Garriga, or is she going to team back up with Nicky to conquer one more big score?

If "Focus" looks as shellacked as can be, the script is only semi-interested in exploring the backgrounds of Nicky and Jess. Nicky is a third-generation grifter nicknamed "Mellow," like a marshmallow, because he's such a softie, while Jess is a self-proclaimed "dyslexic orphan kid" who's been trying her hand at the art of conning. Whereas the con artists in David O. Russell's "American Hustle" needed to do what they did best to survive, there is little desperation felt in these characters, so we're just watching cool characters be cool. Then again, both Nicky and Jess still keep the viewer on his or her toes, as we are never quite sure if one is playing the other or if they're both really playing someone else. The film also has a few narrative cards to reveal, and writer-directors Ficarra and Requa deliver them stealthily with a sleight of hand but with less unbelievability than even 2013's magic-centric "Now You See Me"—and that movie was all about sleight of hand. The couple of twists are clever enough, but they feel like a needless way for the film to outdo itself. Even so, "Focus" clicks into, um, focus when Nicky and Jess are doing the conning like pros. They have a terrific scene together in snowy New York, Nicky showing Jess the tricks of the trade in a few quick moves of stealing her jewelry, wallet, and Zumba membership card on her person. Another scene down New Orleans' crowded French Quarter, where Jess shows what she's made of as a pickpocket, is fluidly cut and fun to watch, as is the film's best set-piece in the Superdome football venue, where Nicky bets all of his and Jess' money away to a giddy gambler (B.D. Wong, who's a hoot). Mind you, these three standout scenes come in the first half. It should also be mentioned that there is a car crash in the final third that is more thrilling in its anticipation and payoff than most long-winded car chases.

Somewhere after 2007's "I Am Legend," Will Smith seemed to be coasting on a string of career choices that didn't exactly go anyone's way, like co-starring but letting his son Jaden lead the way in 2013's nepotistic project "After Earth" and then playing Lucifer in the 2014 disaster "Winter's Tale." Here, as boob-loving con artiste Nicky, he still seems to be taking it easy and not being entirely challenged by the material, but he gets to be charismatic as hell. As fast-learning Jess, Margot Robbie still exhibits more spark and talent than merely a flash-in-the-pan piece of eye candy and she's never just on the sidelines. With luminous beauty and intelligence, she resembles the star quality of Michelle Pfeiffer. If she used her looks, her body, and her smarts to play up against Leonardo DiCaprio in "The Wolf of Wall Street," Robbie does it all over again with Smith, going toe to toe with him and nearly monopolizing the spotlight. Both stars flirt well and have clearly been to the gym, too, or just wake up each morning looking fit. Members of the supporting cast also add enough color to register. Gerald McRaney (2014's "The Best of Me") sharply makes the most of his role as Garriga's right-hand man Ownes who rants about technology, and Adrian Martinez is lucky enough to just show up and earn a laugh as vulgar con man Farhad.

Visually, the filmmakers seem to be channeling the style of Michael Mann and Steven Soderbergh, particularly "Out of Sight," through the neon-lit con world of classy, high-priced clubs and hotels. The title of the film, "Focus," also figures into a few shots that go out of focus. Xavier Pérez Grobet's (HBO's "Looking") cinematography is chic and luscious in its own right and even more so, thanks to the on-location scenery in Buenos Aires, and Nick Urata's score is a sultry one. Also, The Rolling Stones' played-out "Sympathy for the Devil" actually has a memorable purpose here. With a few nips and tucks and a little more substance for something to simmer beneath the cosmetic surface, "Focus" probably could have been better than good. Still, as it stands as an end-of-winter escape that feels more like a summer release, "Focus" gets by on looks and gets the job done.